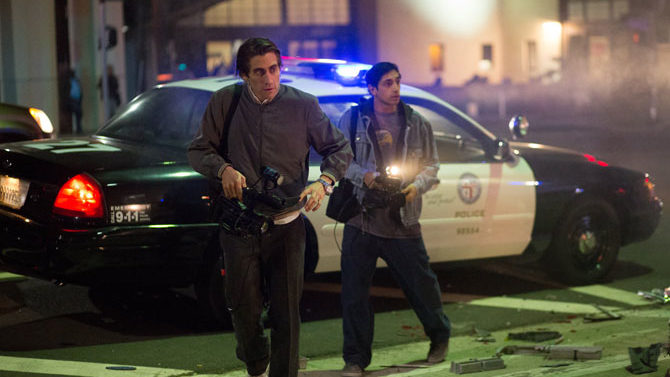 Nightcrawler reminded me why I like to go to the movies. A throwback to the sleazy cinema of William Friedkin and Brian De Palma, Nightcrawler follows Louis Bloom (Jake Gyllenhaal), a very strange dude searching for a career.

After witnessing a couple of guys (led by a brah-tastic Bill Paxton) filming a car accident, Lou, as everyone calls him despite his preference for Louis, buys a camera and starts searching Los Angeles for the kind of bloody criminal activity a low-rated television news channel will buy. Lou isn’t quite a people-person, but he does forge a strange relationship with KWLA’s graveyard-shift news director, Nina Romina (Rene Russo), through his penchant for getting the ungettable shot that also happens to be immoral and probably illegal. The film is exhilaratingly dirty as Lou crawls from carjacking to car accident, while the line between observer and participant blurs.

The Bourne Legacy writer Dan Gilroy’s directorial debut recalls Michael Mann at his best, only missing the blue-lit nights. And a good car chase always brings The French Connection and Friedkin to mind. Too bad Dan’s tabloidish Nightcrawler won’t get the awards love that his brother Tony got for Michael Collins; at best, Gyllenhaal will be a buzzed-about dark horse (though in a perfect world, Paxton’s tiny gem of dudishness would not go unrewarded). Gyllenhaal plays an excellent weirdo, and Lou Bloom has the potential to join the all-time creep list. The actor adopts a noticeably odd walking posture—his arms hanging stiff at his sides—and a too-intense grin. But in spite of his physical eccentricity, sociopath Lou’s most off-putting characteristic is his frightening lack of empathy for the unfortunate victims he films. He sees dollar signs, not people. You’ll see a darkly cool film if you see Nightcrawler.