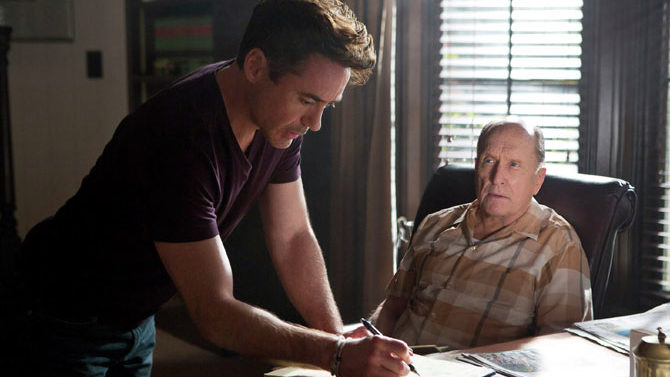 The Judge may be the best adaptation of a John Grisham novel that doesn’t exist. Hotshot defense attorney Henry “Hank” Palmer (Robert Downey Jr.), returns home for his mother’s funeral and winds up defending his father, Judge Joseph Palmer (Robert Duvall), for murder. Apparently, a man convicted of murder wound up in a ditch, and his blood is on the Judge’s car. Hank, known for getting his wealthy, guilty clients off the hook, must take on his most personal case.

Already on the verge of divorce and losing custody of his cute kid (Emma Tremblay, The Giver), Hank also must finally face the repercussions of leaving his small town Indiana family (Vincent D’Onofrio plays the beefy older bro) and high school girlfriend, Samantha (Vera Farmiga), whose teenage daughter (Leighton Meester) might be his.

One has to think Grisham would have smartly jettisoned some of the overstuffed drama—cancer, a mentally handicapped brother, a super-symbolic, narratively unnecessary tornado and more concocted by writers Nick Schenk (Gran Torino) and Bill Dubuque—and whipped up a few more legal twists. Unsurprisingly, the strength of The Judge exists mostly in the performances of its exceptional cast—Downey, Duvall, D’Onofrio and Farmiga, plus Billy Bob Thornton. (Why is Dax Shepard hanging  around? He does little-to-nothing as a local rube attorney.) RDJ and Duvall have a great chemistry (better than RDJ and Farmiga), even if neither’s talents are taxed too heavily by the epically clichéd script. Samantha actually claims to be “the hero of [her] own story” at one point. Director David Dobkin (his Wedding Crashers is almost 10 years old!) survives his first mature drama, delivering a gorgeously shot (thanks to two-time Oscar winning cinematographer Janusz Kaminski) film that is simply too long. The Judge has been drawing comparisons to ’70s and ’80s adult award-winners like Kramer vs. Kramer and Terms of Endearment. While hardly as cinematically triumphant as either, The Judge will rouse sleepy adult audiences with its populist blend of theatrical legal tricks and popular movie stars.