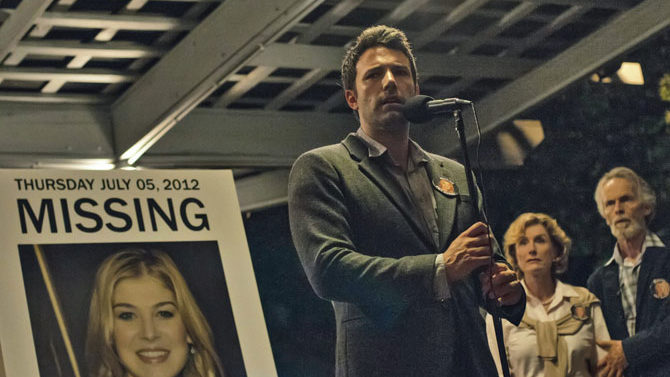 First, read Gillian Flynn’s surprising best seller if you have not; you will not regret that decision. If you did not, check out David Fincher’s adaptation, perfectly rendered by Flynn, before reading any further. The experience will be best felt by those anticipating everything or nothing. The middle benefits no one.

The marriage of Nick and Amy Dunne (Ben Affleck and Rosamund Pike) holds many secrets, all of which float to the surface after Amy disappears one humid July morn. What happened to Amy drives the first half of this thick film. Nick morphs from distraught husband to suspected killer and more, but the truth is much more layered. Summarizing a film as mysteriously intricate as Gone Girl is difficult. Let’s just say the second half questions everything previously seen and heard.

Flynn retains her novel’s propulsive structure in her award-worthy adaptation. Affleck is a surprising Nick. I never envisioned him when I read… er, listened to the novel, but he encapsulates the likable unlikableness of the accused husband. Pike surprises. Though pretty, she has never registered as anything more than capable. Her Amy is complex, gorgeous and dangerous in equal parts. Pike bravely “lets herself go” in the film’s latter half, but award talk is premature. Carrie Coon, very good in HBO’s “The Leftovers,” makes a memorable impression, as does Kim Dickens, as lead investigator Detective Rhonda Boney. The most impressive cast member may be Tyler Perry, who shines as star defense attorney Tanner Bolt. His combination of arrogance and charm epitomizes a great legal shark. Like all admirable films, Gone Girl is a collaborative endeavor, but it’s director David Fincher’s show.

In his last two films, Fincher has made some brilliant narrative choices. Adapting chilly, violent adult lit is Finch’s wheelhouse, and Gone Girl is even better pop lit turned awardworthy blockbuster. Cold, intelligent female leads like Amy Dunne and Lisbeth Salander excel in Fincher’s coolly analytic, cinematic worlds. It’s tough to like the people in his movies but hard not to get sucked into them. It will be interesting to watch perception of this mystery mature. Currently, it’s cinematically unbeatable.