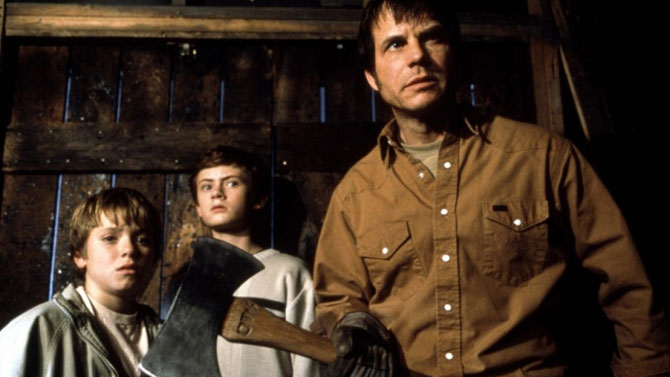 Ah, October, the month we try to the scare the hell out of ourselves by watching as many horror movies as humanly possible. And there’s nothing quite as satisfying as discovering a hidden gem horror film. It’s like discovering that really cool band none of your friends know about yet. Here’s a look at five contemporary movies that may have passed under your radar. Whether or not you’re a rabid horror fan, these films should satisfy your thirst for blood.

FRAILTY (2001) Near the height of character actor Bill Paxton’s Hollywood career and the beginning of future Oscar winner Matthew McConaughey’s, the former took a few months to direct this little-seen gem, a gothic family nightmare in which two brothers tell an FBI agent (Powers Boothe) the story of their struggle to survive with a single dad (Paxton) who may have more than a few family secrets waiting to be unearthed. Without giving too much away, Frailty could be classified as a crime drama or suspense thriller, but its unending sense of dread, heightened by a beautifully layered plot and some truly unnerving scenes, allow it to exist in the horror universe. Boasting excellent performances all around, including great turns by child actors Jeremy Sumpter and, playing the role of a young McConaughey, Matt O’Leary (of the recent creature feature Stung), Frailty is worth discovering.

SLITHER (2006) Before the phenomenal success of the highly enjoyable Guardians of the Galaxy, James Gunn was one of independent film’s brightest rising stars. Following his industry beginnings with B-movie masters Troma Entertainment and, later, the incredibly subversive vigilante film Super, Gunn infuses the spirit of ‘80s low-budget splatter with high production values and a veteran cast to bring us this entertaining remake of a 1973 film. Anyone who saw GOTG knows that Gunn has a firm command of ensemble casts—here, it’s the always likable Nathan Fillion, Elizabeth Banks and Michael Rooker of “Walking Dead” fame—and a flair for spectacle. In Slither, an alien plague infects a small town, turning the residents into zombies and forcing a small band of townsfolk to try to escape the madness. Fifty percent classic monster movie and 50 percent zombie flick, it’s 100 percent fun.

THE ORPHANAGE (2007) This Spanish chiller, released on the front end of the current “jump scare” wave, does an excellent job of creeping out viewers with the required elements of excellent sound, beautiful cinematography and haunting images. In the film, a city-dwelling couple, Laura (Belen Rueda) and Carlos (Fernando Cayo), along with their troubled son, move out to the country to reopen the orphanage where Laura grew up. Though she hopes to create a home for disabled children, ghosts from the past threaten to bring the family to the brink of madness. It’s a class act from top to bottom, with Bayona channelling his best Guillermo del Toro (a producer on the film) and crafting one of the better contemporary takes on the old haunted-house theme. Rueda carries the film as the complex Laura, her subtlety and humanity meshing perfectly with the increasingly horrific happenings. Low on gore but high on scares, The Orphanage delivers excellent atmosphere, great set pieces and an interesting story.

TRIANGLE (2009) “One big head trip” is how I like to describe Christopher Smith’s enigmatic Triangle, a strange little stew of a horror flick, cooked with equal parts mystery, suspense, psychological horror, slasher flick and science fiction. Hardworking single mom Jess (Melissa George, a genre favorite) decides to spend the day with friends on a yachting trip, but as the boat drifts further from the shore and the weather begins to worsen, the discovery of an abandoned cruise ship could lead to danger when the crew realize there’s something following them. Who is the stalker? Can they get back to shore? Do they have any clue where the hell they are? Smith winds his way around to the answers, but not in the way you expect, defying expectations at every turn. This is probably the least known of all the films on the list, receiving a brief and limited theater run, so I really don’t want to give too much away. If you like your horror more mysterious than gory, Triangle‘s increasingly baffling plot should keep you entertained.

YOU’RE NEXT (2011) Though the film grossed $18 million, doubling its budget and receiving solid reviews, most filmgoers never saw You’re Next, one of the most inspired slasher film homages since the nearly 20-year-old genre mainstay Scream. On the way to the family cabin for his parents’ wedding anniversary, Crispian (horror regular AJ Bowen, from House of the Devil and The Signal) and Erin (Aussie Sharni Vinson) encounter more than they expected as the reunion turns sour. Also starring are Joe Swanberg (Drinking Buddies, V/H/S) as Drake, their parents’ arrogant “favorite” child, and one of my favorite ‘80s scream queens, Barbara Crampton (Re-Animator, Chopping Mall). Atlanta horror wunderkind Adam Wingard is on a roll with the recent action-horror film The Guest, which received great buzz on the indie circuit. This film is an action-packed thrill ride, no small feat considering it primarily takes place in one location, and should fulfill your need for nasty, bloody, subversive, high-octane horror. You’re Next might just make you all red-eyed and nostalgic for the heyday of ‘80s slashers.