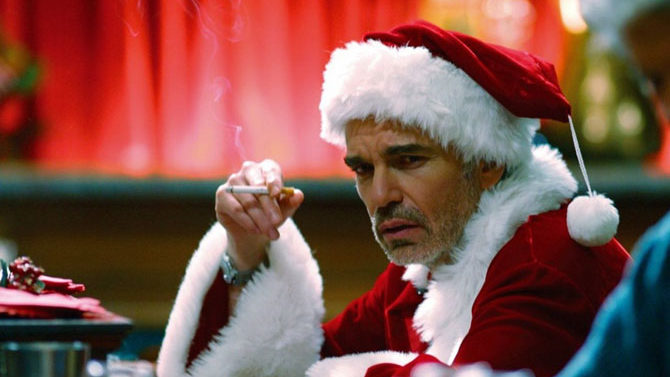 When it comes to Christmas movies, I love the classics just like everybody elseÍ¾ It’s A Wonderful Life, A Christmas Story, Elf, Christmas Vacation, etc., but these days, I like my holidays films a little bawdier. Below are four of my favorite alternative Christmas classics.

THE REF (1994) Directed by the late Ted Demme, this profane comedy is finally beginning to be appreciated as a Christmas cult classic. The Ref finds hard-drinking cat burglar Denis Leary on the run in small-town Connecticut, abandoned by his bumbling partner and forced to take a feuding married couple hostage in order to escape the police. Once he decides to hide out in their quaint Connecticut house, the fireworks begin. Leary has never been funnier or more foul-mouthed, while the equally brilliant Judy Davis and Kevin Spacey, on the brink of divorce, provide the emotional core of the film, years of collective pent-up resentment and mistrust finally bubbling to the surface. The whip-smart writing brings Davis and Spacey’s tête-à-tête to a boiling point just as their horrid family comes by for Christmas dinner, with Leary posing as their marriage counselor. Hilarious from start to finish, The Ref is required holiday viewing.

DIE HARD (1988) Though he’d worked in the business for years, this is the movie that made Bruce Willis a bona fide megastar. It also happens to be both a damn entertaining Christmas film and the template for all action movies that came after. You know the story: Fish-out-of-water New York cop John McClane arrives in L.A. and promptly gets mixed up with terrorists attempting to make hostages of his wife (Bonnie Bedelia) and her coworkers during a Christmas party. It’s a blast, figuratively and literally, as Willis and head terrorist Hans Gruber (an excellent Alan Rickman) go mano-a-mano. You might not have seen it in at least 10 years, but you’ll still marvel at how many of this film’s lines and action scenes are firmly entrenched in pop culture. And really, what could be more Christmas than a shoeless cop teaming up with the dad from “Family Matters” to defeat crazed German terrorists?

THE NIGHTMARE BEFORE CHRISTMAS (1993) Let’s journey back in time to Tim Burton’s golden era. He was hot on the heels of blockbusters Beetlejuice, Batman and Edward Scissorhands, and while Henry Selick is credited as director, this sweetly weird animated Christmas fable has Burton’s fingerprints all over it. Jack Skellington, the mayor of Halloweentown, discovers a series of portals leading to other holiday towns and is immediately enchanted by Christmastown, deciding it needs a creepy, Halloween-infused makeover. Unfortunately, the citizens are totally unprepared for Skellington’s bizarre tactics; as they approach a revolt, his plan threatens to completely unravel. All the early Burton hallmarks are here: Danny Elfman’s haunting score, strange misunderstood characters and visually sumptuous fantasy worlds on display. Nightmare is truly an odd, sweet holiday treat.

BAD SANTA (2003) Before you start wondering why my favorite Christmas films include criminals, alcoholics, miscreants, F-bombs and explosions, just remember that Billy Bob Thornton was nominated for a Golden Globe for this nasty gem. Feckless thief Willie Stoke (Thornton at his rowdy best) and partner Marcus (a hilarious Tony Cox) are determined to rob a department store on Christmas Eve, but the store manager (John Ritter in his last film role) and a security chief played by Bernie Mac are determined to foil the heist. In the classic tradition of Christmas redemption, the love of a good woman (an underused Lauren Graham, determined to subvert her angelic TV image) and the friendship of a hapless kid just might show BBT the true spirit of Christmas. The writing is surprisingly sharp, the characters are vivid, and whenever there’s something you think they won’t do, well, they do it. Similar in spirit to The Ref, Bad Santa is cruder, fouler and darker, yet somehow, in its own twisted way, it manages to find humanity in its flawed but lovable characters.