Give Thanks for Mister Rogers, and More to See This Week 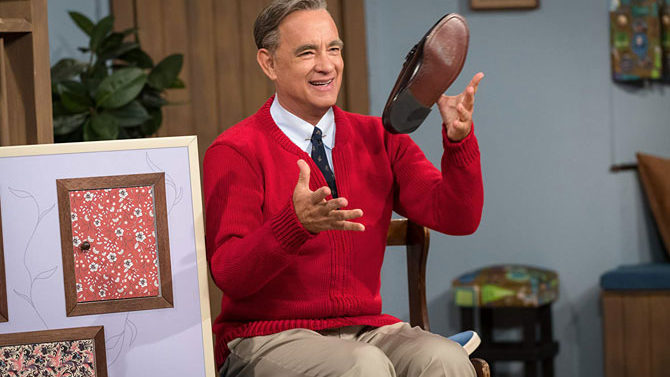 Thanksgiving is here, and historically, the Wednesday prior—Thanksgiving Eve, if you like—rivals the other holidays for its prominent releases. This year, the blockbusters like Frozen II are already here, leaving Thanksgiving Wednesday for Knives Out and Queen & Slim. In Knives Out, The Last Jedi’s Rian Johnson offers up an Agatha Christie-type murder mystery with an all-star cast, including Daniel Craig as a Kentucky fried detective, Jamie Lee Curtis, Don Johnson, Toni Collette, Christopher Plummer, Chris Evans, Michael Shannon, Ana de Armas, Lakeith Stanfield, Jaeden Martell and Katherine Langford. The trailers promise a rollicking mystery ride. Queen & Slim looks ripped from the headlines as an African American couple (Daniel Kaluuya and Jodie Turner-Smith) on a Tinder date wind up on the run from the law after the fatal shooting of a police officer. For better or worse, disgraced memoirist James Frey (A Million Little Pieces) contributed to the story. Music video director Melina Matsoukas makes her feature directing debut with this script from Lena Waithe, whom you may remember from Ready Player One.

Ciné still has the Mister Rogers-centered family drama A Beautiful Day in the Neighborhood—more below—which will be joined by Martin Scorsese’s latest, not last, film, The Irishman, on Nov. 27. Yes, you can watch it on Netflix the same day; however, a new Scorsese mob drama headlined by Robert De Niro, Al Pacino and Joe Pesci—as well as Harvey Keitel, Anna Paquin, Jesse Plemons, Bobby Cannavale, Ray Romano and Steven Van Zandt—deserves to be seen on the big screen if possible. This one is an epic, too, clocking in at three and a half hours. The plot involves the slaying of Jimmy Hoffa, here played by Pacino. Oscar winner Steven Zaillian (Schindler’s List) wrote the script.

Flicker has a little less on tap than usual. Catch a screening of The Comet’s Tale on Nov. 27. Beechwood offers more holiday offerings through its Flashback Cinema series. Harry Potter and the Sorcerer’s Stone screens again on Nov. 27, and Kevin gets left again for the first time when the modern family touchstone Home Alone arrives on Dec. 1.

So, what movie should you plan to escape to when the family drama mounts?

A BEAUTIFUL DAY IN THE NEIGHBORHOOD (PG-13) First off, if you want to soak up the cultural relevance of Fred Rogers, last year’s Won’t You Be My Neighbor? is the superior option I would recommend over Marielle Heller’s biographical drama. Bracingly, A Beautiful Day in the Neighborhood is not a standard biopic. The movie’s real protagonist is Lloyd Vogel (Matthew Rhys), the proxy for real-life journalist Tom Junod, whose worldview was transformed after meeting Mister Rogers (Tom Hanks) for a 1998 Esquire article. According to the film, Lloyd met Rogers following a tumultuous reunion with his estranged father, Jerry (Chris Cooper). The violence of the encounter with Jerry was as obvious as the nose on Lloyd’s face, leading Rogers to ask more questions than his purported interviewer. Aided by Rogers’ beneficent point of view, Lloyd struggled to reconcile being the father of a newborn with forgiving his absentee father.

A Beautiful Day in the Neighborhood flashes bursts of creativity through framing itself as an episode of “Mister Rogers’ Neighborhood” where Rogers tells his neighbors about Lloyd. The transitions from New York to Philadelphia are visualized through the same sort of models familiar to the neighbors of Mister Rogers. Finally, Hanks, a beloved actor with a truncated range, does what he does best. His Fred Rogers goes beyond an uncanny impersonation—he eventually subsumes the real Mister Rogers. Unless one goes back and watches reruns of the classic children’s program, Hanks’ performance will be how they remember Mister Rogers. He may even be the only Mister Rogers many viewers ever know. The magnitude of this loss may best be measured in society’s increasing devaluation of simple kindness.

21 BRIDGES (R) One’s opinion on 21 Bridges may very well rest on whether one reads it as manipulative or smart. Is it willfully ignoring today’s headlines about black and blue lives or successfully co-opting them? The movie begins with a black NYPD detective, Andre Davis (Chadwick Boseman, Black Panther), facing an internal affairs tribunal after yet another fatal shooting. Soon, Andre is on the trail of two cop killers (Stephan James and Taylor Kitsch), as well as possible police corruption.

Television director Brian Kirk keeps matters brisk in his feature debut, never allowing real-world headlines and perceptions about the police drag down this violent cop drama from producers Anthony and Joe Russo, who reined in the last two massive Avengers flicks. For some, that assessment may prove to be the fatal dealbreaker.