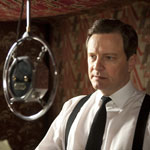 The typically banal winter offerings of the first Friday of 2010 (a lame Nic Cage actioner and a clichéd Country & Western melodrama) granted an opportunity to look back at two terrific late-December releases: the Coens’ new version of True Grit and the Brit pic The King’s Speech.

In the new True Grit, the Coen Brothers have made their strongest, non-Coenesque feature. After the killing of her paw, young Mattie Ross (newcomer Hallie Steinfeld) intends to get her revenge, so she hires U.S. Marshal Reuben “Rooster” Cogburn (Jeff Bridges) to go after the sumbitch named Tom Chaney (Josh Brolin). Joined by dandy Texas Ranger LeBoeuf (Matt Damon), Mattie and Rooster track Chaney beyond civilization and into Indian country. Author Charles Portis’ simple tale of Wild West revenge could not be brought back to the big screen with more intricately written word play and vibrant characterizations. The Coens have not made a film to please their most diehard, quirkiest fans (this is no Barton Fink); what they have crafted is a classic new Western of the most old-fashioned sort, a film I contend to be the best new Western since Unforgiven. Extremely funny yet ironically sad, True Grit should be appreciated by audiences old enough to remember the Duke as well as those young enough to have no recollection of this great American icon.

After the tremendously American True Grit, The King’s Speech comes off even more proudly, stodgily British. After the death of his father, George V (Michael Gambon), and the shocking abdication of his older brother, Edward VIII (Guy Pearce), new King George VI, AKA Bertie (Colin Firth), must overcome a lifelong speech impediment to deliver a rousing message upon the outbreak of World War II. Bertie’s odd relationship with unconventional Australian speech therapist Lionel Logue (Geoffrey Rush) is wondrously chronicled in this film from director Tom Hooper (“Elizabeth I” and “John Adams”) and screenwriter David Seidler. While the plot synopsis may sound woefully dry, The King’s Speech is one of the year’s most humorous, albeit delivered with a stiff British carriage, and tremendously well-acted (kudos to Firth, Rush and Helena Bonham Carter as Bertie’s loyal wife and queen) films.

For anyone who overlooked True Grit and The King’s Speech (or December’s other top releases, The Fighter and Black Swan) amid the holiday parties, shopping and family drama, this bitterly cold, cinematically desolate January is the perfect time to catch up.