Hugh Acheson Is Unveiling a Plan to Remake Home Ec 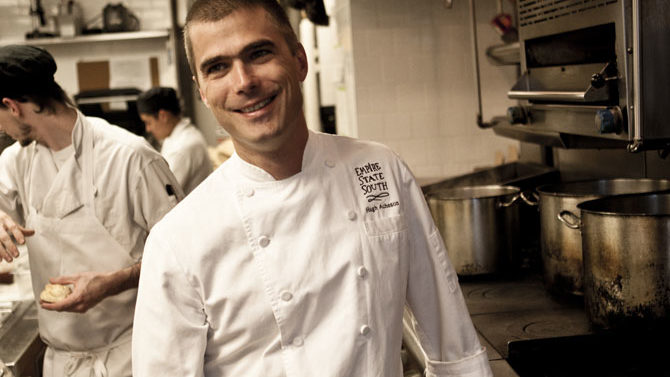 This weekend, Athens will buzz with more than 1,000 farmers, chefs, gardeners, teachers, academics, health advocates and homesteaders in town for the 18th Annual Georgia Organics Conference at The Classic Center.

The theme of this year’s conference is “Recipe for change: better farms, better flavors.” It will spotlight  the influence of how food is grown on how it tastes, and thus how people who grow, cook and eat food all contribute to making sustainable practices viable.

The conference’s return to Athens is something of a no-brainer. The Athens food scene is at the epicenter of farming in our region, with enough committed chefs and conscientious eaters to provide a steady demand for small-scale, organic growers. In particular, Clarke Middle School and Classic City High School (which is a partner with the Athens Land Trust on a community garden) have been recognized on the state and federal levels as some of the best farm-to-school efforts around. The University of Georgia also boasts one of the best colleges of agriculture and environmental sciences in the country, and functions as one of the most pertinent resources for farmers throughout the state.

The conference’s keynote speaker will be one of the men most responsible for Athens’ burst of foodie culture in the last decade or so. You’re probably aware of who the Five & Ten founder is, but you may not know what he’s been up to lately (outside of opening new restaurants, writing cookbooks and starring as a TV cooking judge).

Hugh Acheson has begun work on a charity to reorient the curriculum of home economics programs in Athens-Clarke County, a change in programming he hopes to see catch on nationwide. This nonprofit will be the theme of Acheson’s speech Friday evening.

“We’re sort of redoing the whole curriculum to give kids the life skills so that in their 20s, they actually know how to poach an egg, or make some jam, or make a chutney, or make some pickles, just bare-bones cooking necessities that people seem to have forgotten how to do,” Acheson says.

For all of the aforementioned reasons, Athens seems like a good launching pad for this idea of more meaningful home economics lessons. We’ve seen agriculture grow into the curriculum of many subjects taught in this county, and it follows that students should also learn how to cook and eat what they’ve planted.

“I think the edible gardens have seen a maturation in idea to where it used to be kind of about kindergarteners planting a seed, and watching it grow, and ooh la la, and you’re done, and then the stuff just never really gets harvested and never gets used,” he said. “And now it’s being used.”

Acheson noticed the need for a reassessment and redesign of what’s going on in home ec classrooms when his daughter came home from school after learning to cook red velvet cupcakes from a box and croissants wrapped in bacon from a tube. Although he’s not particularly worried for his own children, Acheson cites low college graduation rates among students coming from low-income households in part to the lack of practical life skills being taught in schools.

“It’s like, well, what if we taught them how to be that much healthier and that much smarter about how they spend their money, and taught them the value of a No. 1 combo at a fast food joint? That money that you think is a really good deal can feed three people if you really think about it properly and have some basic cooking skills,” he says. “It’s like getting badges in Boy Scouts—somewhere along the line, you need to know how to make a fire, and somewhere along the line, you should know how to scramble eggs without screwing it up.”

Although we may have lost a generation or more of cooking skills to things like minute rice and instant mashed potatoes, Acheson is hopeful for the outlook of his program and the country’s attitude toward food in general.

“There’s an empowerment happening in food policy that we haven’t seen in quite some time, so it’s the right time to make a difference,” he says.

Hugh Acheson’s keynote speech at the Georgia Organics Conference is at 5:30 p.m. Friday. Jodi Cash blogs at The Seed and Plate.