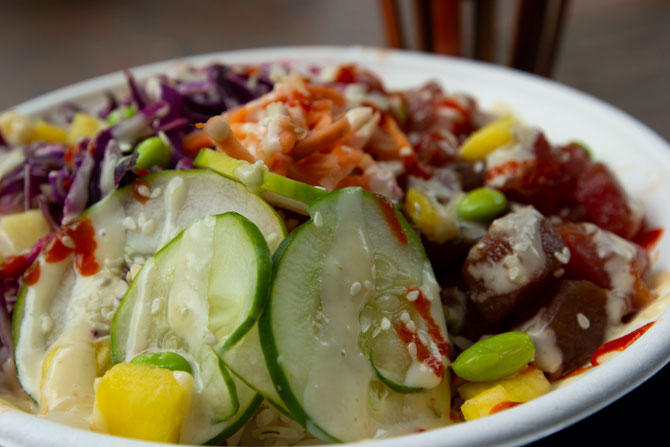 Poké started trending up as a fast-casual staple last year, which is also when Athens got Ahi Hibachi and Poke (489 E. Clayton St.). Partially, the Hawaiian specialty that usually starts with rice before adding raw or cooked fish and seafood, veggies, fruit, seasonings like sesame seeds and various sauces feels healthful and fresh—two words young consumers tend to be drawn to. It doesn’t hurt that it’s also less expensive to open a poké place than a full-scale restaurant, considering that the cooking equipment you need is limited. And it makes sense for places that already do sushi to add it, as most or all of the ingredients are on hand.

I did my best to eat poké at every place in Athens that offers it, although I didn’t make it over to Craft Public House, on the Eastside, which has an appetizer at the moment that is more poké-inspired (no rice) than poké per se. I still think Ahi is the best, due to its wide variety of ingredients, smart ordering system—a sushi-style slip of paper on which you can mark your choices, rather than having to make one decision after another on the spot—good rice and generally solid execution.

Inoko Sushi Express (2301 College Station Road, by Kroger, 706-546-5662) has always been my favorite place for fast, inexpensive sushi that is still pretty good, and it’s no surprise that it does a decent job with poké, too. The tuna bowl is available speedily and includes crab stick, spiralized carrots, ginger, a dollop of wasabi, masago roe, lettuce (meh), cucumber, pretty shreds of dried seaweed, wakame and very good rice, as well as the standard array of sauces. You generally can’t go wrong with a “house” poké sauce—essentially a ponzu with sesame oil and sometimes chili—although some of them are sweeter than others.

The new Poké Bar (1791 Oconee Connector, near Gigi’s Cupcakes, 706-850-3410) is a fast-casual franchise out of California that lets you pick white or brown rice—regular medium-grain, not sushi rice—salad greens, kale noodles or tortilla chips as a base before adding tuna, spicy tuna, salmon, albacore, tofu, scallops, shrimp or octopus. You get two, three or four proteins, depending on whether you’ve ordered a small, medium or large. The folks behind the counter scoop your stuff into a bowl, then add corn, jalapeño, cilantro, shredded kale, cucumber, sweet onion, scallions, pineapple and/or edamame, before tossing it all in sesame oil, ponzu, spicy mayo, sweet chili, sriracha, wasabi shoyu, regular shoyu and/or house sauce.

What I’m saying is, there are a lot of choices to make at Poké Bar, and although some people find that invigorating, I tend to find it enervating. A to-go menu includes several pre-set combos that you may want to take advantage of. You also get cucumber salad, crab salad and/or wakame, plus toppings that can include avocado (for an upcharge), mango (ditto), crispy onion, masago and more. The result is fine, if not tremendously exciting, as you might expect from the restaurant’s location in a shopping center largely populated by chains, but it does have bubble tea and mochi ice cream, both good for a cute snack. 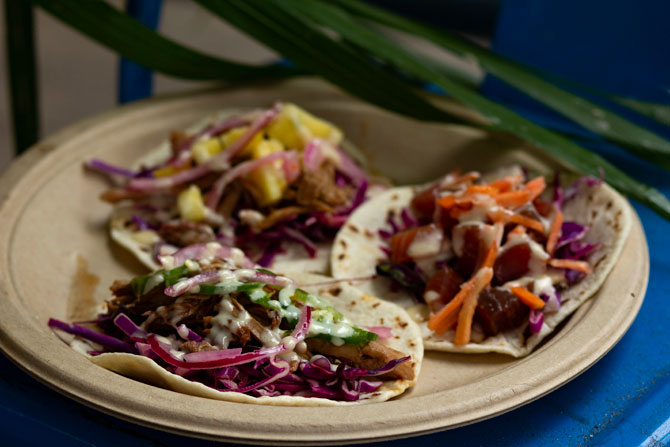 Koa Surf Bar and Restaurant (114 College Ave., 706-207-4989), which originally went by the name Koa Bowls, is less organized. It feels like more of a bar than a restaurant, due to the kitchen frequently being out of things and the disposable plates and flatware you get even when dining in. That said, the presentation is well done, with sauce squirt-bottled over the top of your bowl in an Insta-ready pattern.

What you can order consistently at Koa is a bit of a mystery, as the menu on the website differs from the menu you’re handed, and neither may reflect all the actual offerings. You can get a tuna poké bowl, most likely, with long-grain rice, a variety of veggies and spicy mayo. You can also get a pork bowl, with similar ingredients, and, best of all, sliders—or, should they be out of buns, a larger sandwich—with the same pork and veggies that are an excellent bar meal. Your mileage may vary.

Tokyo Express (690 U.S. Hwy. 29, by Space Kroger, 706-543-8833), which does hibachi and sushi mostly to go, also has poké, which makes sense. The assembly counter is perpendicular to the one at which you order, and does require a lot of choices, but at least it’s compact. Like Poké Bar, it offers octopus as a protein, but rather than the less freaky hunks at the chain, Tokyo Express has whole baby octopus, which are significantly tastier. Its house sauce is a little too sweet, but it has other options, including its popular yellow sauce that it sells by the jug.

Hours vary for all these places, but all of them are open for lunch and dinner every day, except the UGA one, which closes earlier. Koa is open late, as you’d expect of a bar, and is the only one that also has a liquor license.