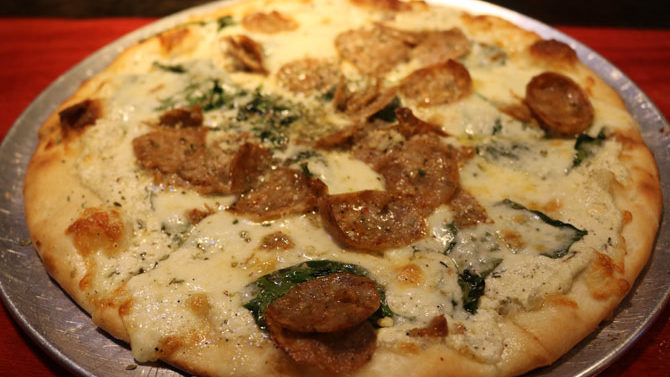 PIZZA PIZZA: Not every restaurant I write about is the most exciting thing in the world, which doesn’t mean they don’t all have their place or their audience. There is something to be said for a restaurant that fills a niche or a need in a particular neighborhood, which is exactly what Fully Loaded Pizza Kitchen (1260 Mars Hill Road, 706-705-6150) is for Watkinsville. Apart from Your Pie and, sort of, Peppino’s (in Athens, but close), Watkinsville didn’t have an independent pizza restaurant until now.

Fully Loaded occupies the spot formerly held by Fifth Avenue Pizza (pizza ovens being expensive and difficult to install or replace means one pizza restaurant often follows another in the same space), and the decor hasn’t changed much. A large bar with big TVs mounted above it pours some local brews on tap, and various pizza-themed paraphernalia decks the walls. There’s a good covered patio off to the side, and the work on Mars Hill Road that has been slowing traffic there for some time seems to be done, meaning it’s much easier to enter and exit the shopping center.

The pizza is both available in a wide variety of topping combinations (for example, the El Chapo, with olive oil, garlic, mozzarella, chorizo, onion, jalapeños and a fried egg) and totally good. Judged by the standard of a plain cheese slice, it ranks very highly, with plenty of oil and salt (but not too much of either), nicely crisped edges, a thin crust that doesn’t require a fold and a fairly thin edge crust that doesn’t puff up much. The sauce doesn’t interfere. It’s not too full of red pepper or sugar or, really, anything. It’s just there to provide a hit of sweet and salt between the cheese and the crust, both of which take precedence. A slice is always going to show off the pizza maker’s best side, especially as compared to the middle of a thin-crust pie that bears a lot of toppings, but the full pies are good, too, and priced in the ballpark of a Little Italy or an Automatic Pizza.

Fully Loaded also does wings, as you’d expect, and they are on the meaty side but could stand to be fried a bit more aggressively. Both the ranch and the blue cheese dressing you can choose from as an accompaniment are homemade. The other thing you need to know is that you can order something called a “pizza dog,” which is just what it sounds like: a sort of Italian-ish version of pigs in blankets, with one or two hot dogs rolled in pizza dough, baked and served with ketchup and mustard. It is not bad, and it comes in a kids’ version, should you be so unlucky that your children do not or cannot eat regular pizza.

The restaurant also has sandwiches (a decent meatball sub), salads (fine, not very exciting), chicken fingers, kids’ meals, nachos, various fried apps, cannoli, zeppole and ice cream. It does take-out, plans to offer online ordering, has a full bar and is open for lunch and dinner every day.

OFFICE POLITICS: The problem with The Office Sports Bar and Grill (135 W. Washington St., 706-521-5898) is that it is maybe too invested in its theme. Everything on the menu has some sort of a clever heading (“Overtime” for desserts, “Office Banter” for mixed drinks, etc.), and the decor is intended to evoke a sort of bygone, clubby atmosphere that is no longer the norm, with lots of leather and one fancy booth lit by Edison bulbs. Even the actual menu comes in a thick leather book, as though you’ve walked into a fancy steakhouse.

That’s fine, and there’s a place for grown-up lunch and dinner options downtown (lawyers gotta eat, too), but you also have to make good on what you promise. The rosemary chicken, which is described as being “tossed with our rosemary alfredo sauce” and pasta, is almost a soup, it has so much sauce. The fried ravioli as an appetizer is totally fine, but closer to frozen pizza rolls than to anything high-end. The tacos that can be made with fried or grilled fish are burrito-sized, presenting good value, but not well suited for a business lunch.

It’s confusing whether the place wants to be a sports bar (lots of TVs, a light-up ticker that runs scores and news, wings) or a place to make real-estate deals. It really tries to be both, which means it ends up being, approximately, an Applebee’s: a place that offers a lot of comfort food choices, like mushroom risotto, roasted brussels sprouts and mashed potatoes topped with bacon, plus TVs so you have something to gaze at to fill awkward silences.

Tuesdays bring a $5 burger special, which is an excellent deal, and the burgers are decent, with a whole bunch of topping options. The Office is open for dinner every night, for lunch Monday through Saturday and for brunch on Sunday, with hours until midnight most nights. It has a full bar and a patio and promotes various specials through its Facebook page.