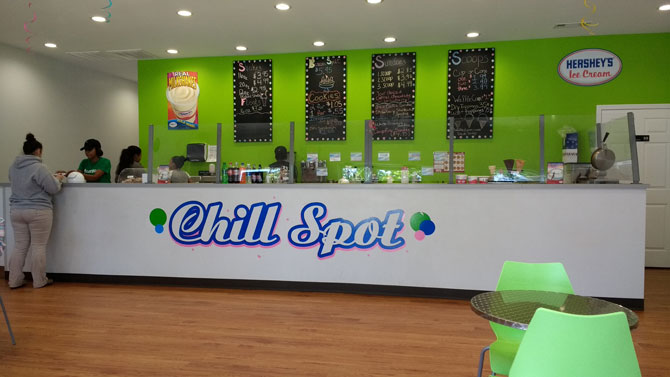 OUTTA TOWN: Most of the UGA students are gone, and Clarke County School District students are out for the summer. The weather’s starting to hit 90 degrees on a regular basis, and all the bugs that didn’t die over the winter because it didn’t get cold enough are emerging in scary waves. The best solution to all of this is to eat ice cream, which seems to be making a good effort at a resurgence after a decade of fro-yo dominance.

Out in Lexington, where the still pretty brand-new Oak Tree Plaza shopping center just celebrated its first anniversary, Chill Spot Ice Cream (777 Athens Road, 706-338-8380) is making a go of it as an independent ice cream parlor. Unlike most places named for natural features, which tend to have eliminated the flora or fauna that supplied their monikers, the plaza features a very large oak tree right in its central area

Decorated in pink, blue and green, it feels like it could be a franchise, but its owner is proud of the fact that it’s not. She serves Hershey’s ice cream, which is no relation to the much more famous chocolate company, except that they both hail from the same town in Pennsylvania, and says she sampled a lot of kinds and opted for one that would be unique to the area and that you couldn’t get at the grocery store.

At the moment, you can get about a dozen flavors, but any day now she’s installing a new freezer that will hold another dozen, mostly fairly standard offerings, like coffee and peach. You can get it in a sundae or a shake or (maybe your best option) as an ice cream sandwich, either regular or mini-sized, on two fresh Otis Spunkmeyer cookies, baked behind the counter in several varieties.

The ice cream is not world-shaking, but it is good, and it certainly provides a service to a small town. Chill Spot is open noon–8 p.m. Monday through Thursday, noon–9 p.m. Friday and Saturday and noon–4 p.m. Sunday. It also does birthday parties. 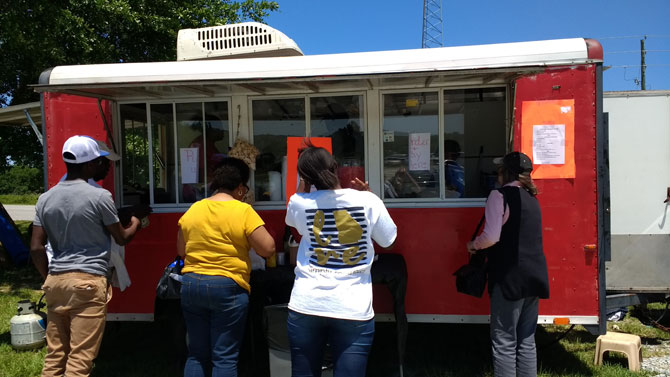 The plaza, which also includes a Tex-Mex restaurant and an Americanized Chinese restaurant, was having a celebration on the day I showed up, which included a trailer by Joker’s BBQ. The Lexington-based company mostly does catering and doesn’t have a regular location. Its pork could be better—it’s a little fatty and not very well chopped—but the vinegar-based sauce is nice and simple. Both the smoked chicken—served by the half, with two slices of bread, for $5—and the ribs are solid. I didn’t get a chance to try the sausage dogs with peppers and onions or the bags of pork rinds Joker’s had for sale, but they looked promising.

IN TOWN: Here in Athens, the best news I’ve heard in quite a while is that La Michoacana Es Natural, the wonderful ice cream and paleta parlor out in Hull, in front of the Ingles—not to be entirely confused with La Michoacana del Tio Tino, inside Georgia Square Mall, which has different owners and doesn’t do paletas—has opened a branch inside the Eastside Cali N Tito’s. Already a veritable paradise for kids, Bruno Rubio’s restaurant is all the better for the addition.

La Michoacana seems to have everything that the original location does, with a freezer jam-packed with at least two dozen kinds of popsicles, a large number of ice cream flavors and the teenager-oriented high-flavor snacks that include Dorilocos. You can also find its popsicles in a dedicated small freezer at Los Compadres grocery store, at Prince and Satula, but the number of flavors is smaller (chocolate, caramel, strawberry, a few others).

Still, I have yet to find a bad or even underwhelming one. The strawberry tastes like someone is cramming a handful of fresh strawberries into your mouth, with a flavor that evolves the longer you hold on to it. The watermelon, which is water-based rather than milk-based, has occasional chunks of real fruit, plus a thin stripe of green at its base that is, wonder of wonders, rind-flavored, with a faint, salty bitterness that plays beautifully against the sweeter pink top. The guava (water-based) is subtle and studded with tiny nuggets of fruit. The pistachio is so good it will make your knees weak. The paletas are large and less expensive than the ones from King of Pops, and you will want to eat more than one. Do it. I won’t judge you.