Speakeasy 2.0: The Downtown Restaurant Changes for the Better 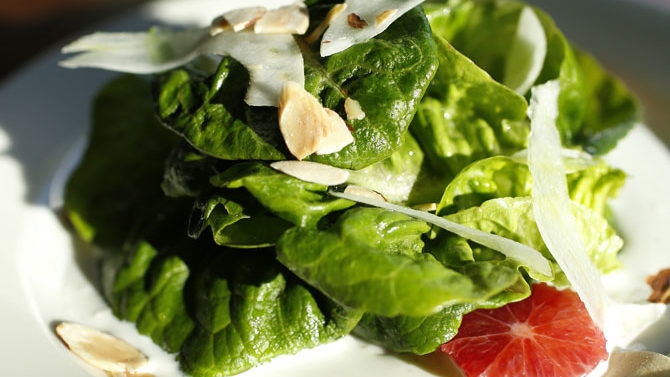 Change isn’t easy. Speakeasy (269 E. Broad St., 706-546-5556) opened 15 years ago in downtown Athens, and it always seemed to have an “if it ain’t broke, don’t fix it” philosophy. The thing is, over that decade and a half, the menu became dated, and the restaurant faltered. With the hiring of Swen Froemke as general manager and with owner Patrick Anderson taking the reins in the kitchen, there is a world of difference in the experience.

Everyone expresses concern about local farmers and produce these days, but it’s often a sales tactic rather than a philosophy. It’s genuine at Speakeasy. The menu is new; the attitude is assured, and the food can be on par with the best in town.

There are dishes that you should make a special point to experience. If you miss the desserts at Cinco y Diez, where Froemke ran pastry, the sopa de fruta will make you happy. The combination of a lake of sparkling blood orange juice dotted with sectioned pink grapefruit and oranges and featuring a circular cake of caramel corn topped with coconut sorbet may sound like too much, but it is refined, beautifully presented, complex and a complete delight.

The Beeler’s pork belly taco may seem a little pricey at $6 for a single soft taco, but it’s a contender for the best one in town. The meat is perfectly cooked (too many chefs think pork belly automatically gives a dish an upgrade, but when left greasy or thick or underseasoned, it instead detracts seriously), accented with fine cinnamon, and the cotija cheese crumbled on top gives it the pop of salt it needs. The combination of chicken and waffles often ends up sad, soggy and saccharine, but at Speakeasy, although the buttermilk hot sauce is a bit disappointing (it’s fine, just less inspiring), the Springer Mountain bird is fantastically well cooked, the waffles both fluffy and crisp, with a moist bite on the inside, and the maple bourbon syrup a subtle and genuine accent to the dish.

There are items on the menu that are less exciting. The grilled Gulf shrimp with BBQ sauce is prettily plated but lacks inspiration. The paella is wet, lacking the traditional crust on the bottom of the pan and cooked in cast iron. The nuggets of protein buried within are flavorful and good, but the dish, like risotto, is difficult to do justice to in a restaurant. But, for the most part, everything has some sort of highlight. The chicken confit on special one week was accompanied by rice pilaf, a contender for the two most boring words in the English language, but with notes of cucumber and finely diced vegetables, it transcended its blasé nature.

The kitchen can do a lot with fairly simple ingredients and clearly cares deeply about the quality of those components. A salad of little gem lettuce, blood orange, shaved fennel and roasted almonds, dressed with a buttermilk vinaigrette, shows a great love for vegetables and an ability not to pile too much on a plate. Instead of being overwhelmed, the lettuce shines. The smoked duck flatbread includes thinly sliced figs that don’t take over the flavor profile, something they’re often wont to do, and the texture of the crust is pitched just right, neither cracker nor overly bready mouthful.

Best of all is the fact that most dishes change as you eat them. They start off with one pleasant but expected combination of tastes, then zigzag into something related but new. The entree of Beeler’s pork shoulder seasoned with guajillo peppers and coffee is a great example, served over some of the best grits I have ever eaten and with large asparagus that has been simply cooked, as it should be. Meaty but not overwhelming, it seems like comfort food (and it is), but the coffee with which the pork has been cooked blossoms in the next second, then recedes with grace. A special of little mushrooms stuffed with chorizo is comparably difficult to figure out, even as it is enjoyable to eat.

This does not mean there is no work to be done. Lunch, which has been added, seems like a bit of a tough sell. The menu is no different than at dinner, which can make the prices feel high. Late night is a better bet, with a pared-down list of options. The flight of stairs up which one must struggle is intimidatingly steep, and due to the historic nature of the building, there is no alternative to climbing them. The room is rather too dark, and at some tables you will have a very tough time reading your menu.

Service remains solid-to-great, and the cocktails, spirits, beer and wine are finely chosen and quietly hip. You should go, especially if you haven’t been in a long time. Here’s hoping the commitment to change is something that doesn’t go away. Speakeasy is open for lunch on weekdays, for dinner every night and from 11 p.m.–2 a.m. Thursday through Sunday and does catering. You can get your parking validated for the College Avenue deck.