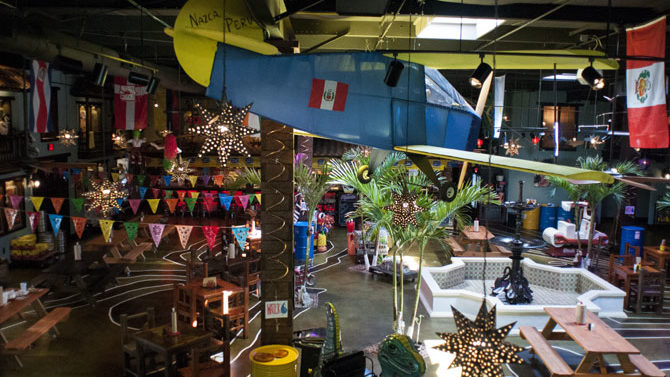 BETTER WHENEVER THAN NEVER: A wise man, former Flagpole music editor Chris Hassiotis, described La Puerta del Sol (1254 Cedar Shoals Drive, 706-355-7087), Bruno Rubio’s new pan-Latin restaurant on the Eastside, as “like the pure distillation of everything Bruno’s been working toward.” This review could quite honestly end right there, for those who are familiar with Rubio’s style from Cali N Tito’s and his many previous projects.

The former Cofer’s, across from Cedar Shoals High School, has been thoroughly Bruno-fied. Here is a list of things you will see in the enormous space: vintage video games, a Lucky Cat above the bar, dry-goods storage in plain sight, a large-scale operational fountain, punched-tin lamps, parasols, copious pennants and flags, vintage movie posters featuring Cantinflas (the “Mexican Charlie Chaplin”), a working pump organ, 25-cent rides for kids, tricycles scattered about for the riding, huge projection screens for sports, a suit of armor, small balconies on the second floor and, ahem, an airplane suspended from the ceiling.

La Puerta del Sol has been in the works for years, and it shows, but that doesn’t mean it’s a finished object, either.

And yet, because of the size of the space and the care lavished on the decor, it somehow all works beautifully. It is noisy visually and aurally, but it is charming, and it takes the tendency toward collage visible in Rubio’s other restaurants to a new and more polished level. Even the crushed shells that form some of the landscaping outside evince a fancier approach without seeming like the ritz is exactly being put on.

La Puerta del Sol has been in the works for years, and it shows, but that doesn’t mean it’s a finished object, either. Credit card processing was only added recently, the ordering system is still being refined, and not all of the staff has its act together, yet. As is frequently the case at Cali N Tito’s, what you order may not arrive as exactly what you were expecting, even if you’ve had it many times before, but it will be delicious.

The menu is almost the same as at CNT, especially at lunch, but it expands somewhat at dinner to incorporate some things from the former Pollo Criollo, Rubio’s chicken place that used to operate out of the Prince Avenue space now occupied by Journey Juice. Sadly, the pollo rico is not the amazing rotisserie chicken that was the single best thing Pollo Criollo offered, but just some grilled chicken breast.

The ceviche comes with a ton of red onions (yum), as well as sides of sweet potatoes and cancha (whole toasted corn kernels that are crunchy, starchy, faintly bitter and extremely addictive), and even all jumbled together is refreshing and pleasant. The tacos dorados (taquitos, basically) seem to have disappeared from the menu, but are the nicest version of the snack best known from gas stations.

Everything else (empanadas, cubanos, tacu tacu, lomo, Tito’s Fish Burrito, etc.) is just as it should be, and now you can get a beer or a glass of wine with your meal without having to plan ahead. La Puerta del Sol is open for lunch and dinner every day except Monday, does take-out, has indoor and outdoor seating plus tons of parking and is thoroughly lovely.

YOU ONLY BURRITO ONCE?: A friend of mine asked if that’s what the “YoBo” in YoBo  Cantina Fresca (1591 S. Lumpkin St., 706-549-3900) stood for, but it probably shouldn’t. This is the second location of the restaurant, the first being in Charleston, and it behaves like a chain, even if it’s a small one so far, with branded T-shirts for the staff and a well-developed website.

The emphasis is on healthier Cali-Mex food, with well-sourced proteins and lower salt content. That means some things succeed and others don’t, and that the price point is higher than a lot of its competitors. Paying $8.50 for a burrito is a tough sell, especially when you also have to pony up for chips and salsa.

The easiest way to figure out how good something’s going to be at YoBo is to determine how juicy it is. The Green Kahuna burrito, for example, filled with grilled shrimp, rice, black beans, cabbage and salsa cruda and soaked with jalapeño-lime sauce, requires some napkins but is totally worth it. The Santa Fe (avocado, grilled vegetables, black bean and corn salsa, lettuce, cheese, Santa Fe ranch dressing) is slightly less messy and slightly less good but still tasty.

The Mexican slaw, on the other hand, which is mayo-free, is basically a Dixie cup of raw cabbage and is tremendously unexciting. The borracho beans, despite the promise of bacon, are similar in impact, and the grilled corn on the cob pales in comparison to its inspiration (elote). Forced to pick one taco, you should opt for the Baja, which makes use of a dang good chipotle-yogurt sauce, but the Diablo is pretty good, too.

YoBo is open for lunch and dinner every day, has a small but full bar (with four beers on tap, two pouring Creature Comforts), does take-out, accepts credit cards, offers Charleston-made expensive chocolates for dessert and should maybe minimize the “sorority girls in sombreros and fake mustaches” photos it has a tendency to use.