Cinco y Diez is Worth Your Nickels and Dimes 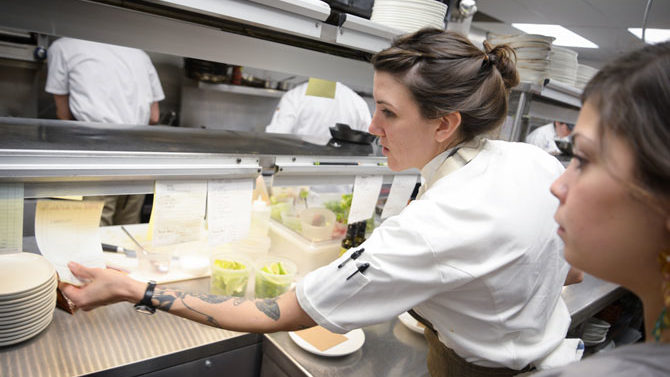 STRAIGHT-UP ORO: When the news broke that Hugh Acheson was teaming up with Whitney Otawka (late of Farm 255) to open a Mexican restaurant in the heart-of-Five-Points former location of Five & Ten, people complained: Mexican? Really? Don’t we have enough Mexican food in this town? As usual, those naysayers failed to see that Acheson’s instincts are reliably on-trend and, thus, ahead of the curve for Athens.

You may think of Mexican food as divided between the burrito supreme/nacho camp and the tripe tacos you get in a gas station restaurant, but, like any worthy world cuisine, it has a much broader array of offerings and translates just fine to high-end renderings. Rick Bayless has made a career out of it, people. All this is to set up that Cinco y Diez (1653 S. Lumpkin St., 706-850-2020, cincoydiezathens.com) is worth your nickels and dimes.

The by-now dated Five & Ten interior has been ripped out, and not much has been put back in. Reclaimed wood, exposed brick, a fancy light fixture and a bigger bar dominate, but the dinner menu is printed on newsprint, the napkins are nothing fancy and there are no tablecloths in sight. Details tend to be straightforward rather than fussy, although they don’t always work; the thick butcher block that delivers some appetizers is attractive but slides around on the table. The staff is attentive but not formal, although you may lose count of the number of very hip folks who come to your table to address your needs.

The two major flavor notes that dominate Mexican cuisine are corn and bitterness, neither of which is particularly in favor at the moment, so it’s nice to see them both handled with care and subtlety, fanned out like a pack of cards. Corn has been demonized over the past decade, but it has much to recommend it as a foodstuff, including how nicely it plays with other ingredients. The masa crackers that accompany the ceviches at the beginning of the menu make use of both and should not be missed, despite (or possibly because) of their resemblance to Fritos. The tortilla-chip-like base that forms the foundation of the huarache, piled high with housemade chorizo, thin-sliced potatoes, ricotta, salsa and gorgeous quail eggs, hits different notes with its corn, but in the same family. Ditto the housemade chips that come with the salsa sampler, although they could use some salt.

Otawka is in no way afraid of meat, but she obviously has a deep love for vegetables. The dish of roasted turnips and winter squash with crisp-fried greens and a sauce based on pumpkin seeds is a perfect example, not to mention a mini-seminar in the beauties of bitter. The turnips turn sweet when roasted, but they also maintain a woody, fibrous mild bitterness. The squash is almost blackened, its seeds and skin providing a different variety of bitter; the greens (amazing stuff) disintegrate in the mouth with a puff of vegetal bliss; and the sauce adds to the complexity without overwhelming anything. It is all just the faintest bit disgusting, this plate of earth and winter and primal tastes, but it is also fascinating.

The roasted carrot salad makes great use of puffed amaranth and a delicate avocado dressing that is (somewhat weirdly) placed underneath the ingredients. If you can get everything into a bite, you will be delighted. If you are ordering tacos, you might as well get all three, but the veggie version, with hen-of-the-woods mushrooms, is the most interesting and the tastiest.

The entrees so far do not seem like a let-down. The Mexican fried chicken, placed atop a well-executed red mole, is perfectly cooked, with chard that calls to mind Eddie Hernandez’s fantastic greens at Taqueria del Sol. The mahi-mahi pibil is likewise cooked to a turn, but its real magic is underneath, in the mixture of Carolina Gold rice and a frankly magical sauce that appears based on nothing more than butter, onions, cilantro, a touch of seafood stock and, perhaps, citrus.

Brunch is good, too, though not as good as dinner. The chorizo hash, which layers poached eggs, kale, sweet potatoes and poblanos, is much more exciting than the sum of its ingredients. A special of pork-belly-confit chicken wings accented with sliced chiles is fun and tasty. The torta hormiga is plenty tasty and more sophisticated than what you can get at Tlaloc, but not necessarily better.

Most of all, do not skip dessert. I don’t care if you’re full. Or if you don’t like sweets. Dessert has provided two of the best things I have had at Cinco y Diez: a plate of perfect churros, balanced on a scoop of anise ice cream, and a grapefruit-black pepper sorbet that incorporates some serious vanilla and almost made me drop my spoon with its heady vortex of flavor. Exploring further is warranted.

The restaurant is open for dinner every night and brunch on Saturday and Sunday and takes credit cards. It has a full bar and a solid, entertaining list of beers, wines, soft drinks and cocktails.