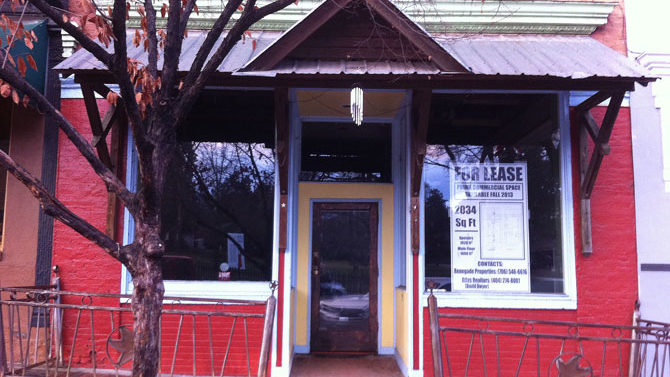 When Athens keeps receiving accolades for the quality of its organic foods, the vigor of its cultural offerings and the gloriously local nature of its food scene, it’s hard to complain. Still, this town remains both an overachiever and an underachiever when it comes to food. We’re growing and improving every year, but never quite as fast as one would want. That said, there were a few innovations in 2013 that moved us further in the right direction, as well as some eats that weren’t necessarily new but made up for their lack of sparkle with wonderful competence.

The opening of Independent Baking Co. was undeniably fantastic, giving our small city a bakery that can stand with almost any in the country. The breads made with wild yeast are subtle and powerful at the same time, the pastries distractingly good, the atmosphere minimalist without being austere and the entire staff clearly in love with what they do.

The World Famous caught the attention of the New York Times by being an embodiment of what we all love about Athens: small, quirky, comfortable and eager to experiment. Jarad Blanton’s bearded face is visible through the small window into the kitchen as he assembles creative, robustly flavored dishes that pair nicely with chill cocktails and housemade sodas.

Mimi Maumus decided to add in-store dining to home.made catering on Baxter Street, and despite a few hiccups as neighbors complained about parking, the charming space is making a go of it, preparing Southern-accented lunches with undeniable care and sweetness. The chocolate-cherry-bourbon pecan pie has a crust good enough to ignore its almost equally tasty filling, and the atmosphere is a real achievement in its strip-mall surroundings.

Little City Diner, opened in Winterville by the Big City Bread folks, added some serious eats to Athens’ tiny neighbor-town, with a brunch/breakfast worth the minor cost in gas. It, too, makes an excellent pie, less fancy-looking than home.made’s but obviously created by hand rather than machine.

Five & Ten moved into dramatic new surroundings without missing a beat, and although it’s undergone quite a bit of turnover in the past two years, with Chuck Ramsey (Pulaski Heights BBQ) and Dean Neff moving on, and Kyle Jacovino about to join them as he transfers his talents to Hugh Acheson’s Savannah Italian project. Jason Zygmont has been handed the reins in the kitchen, and judging by a recent dinner there, the restaurant’s reputation for smoothness and continuity remains justified. A roasted beet soup was a particular highlight, poured from a silver teapot at the table, with a tiny smoked-trout pierogi, dill, crème fraîche and grains of puffed farro providing tiny presents enjoyed while working one’s way through the dish. The casual lunch is a great addition to the town, and the coffee bar is a lovely and focused environment with plenty of natural light. (UPDATE: Per Five & Ten, lunch service is no more, having stopped as 2013 gave way to 2014. Coffee is still available, but only during dinner hours.)

Matt Downes of Luna Bakery finally opened Ideal Bagel, next to Treehouse on Broad, and it was worth the wait, especially the sandwich that consists of ketchup and scrambled eggs on thin white bread and the house-smoked fish you can get atop a bagel with cream cheese, red onion, tomato and capers.

The ethos that drives the juice trend nationally (raw-foodism, radical diet in the guise of mere healthy eating) may be aggravating, but the product at Journey Juice in Normaltown is damn tasty. New Year’s resolutions will no doubt be kind to the smart young people who opened it. Ditto for Juice Up and its blended healthy stuff in the former 283/Downtowner spot downtown on E. Broad St.

Downtown may have experienced a little less turnover than in an average year, although the closings of Five Star Day Cafe, Farm 255 and then, at the end of the year, Echo all created some turmoil. The Rooftop at the Georgia Theatre continued to put out awesome grub in a killer and unique environment, Five Bar pulled in crowds with sushi and whatnot, and OK Cafe pressed panini and made fresh waffles in front of Wuxtry.

On the other side of College Avenue, Herschel’s Famous 34 started serving various combinations of Doritos and chicken to football fans, Little Bull Bar and Grill cooked Puerto Rican food on Broad, Cozy Yum Yum moved next door to the former Bluebird on Clayton (where Athens Wok has a sign up promising “Chinese Sushi and Thai”), and Insomnia Cookies opened on Clayton.

Franchises bit the dust, too, with Al’s #1 Italian Beef and Mama Goldberg’s both closing. Down the hill, toward the river, there were more changes afoot than all the Selig drama, with Mama Bird’s Granola and Kitchen opening in the 909 Broad Building (organic produce available downtown!), Jittery Joe’s relocating from its rustic spot to Barber Street, and Dexter Weaver continuing to yank everyone’s chain with his promises to close Weaver D’s (thankfully untrue so far). Creature Comforts, the small craft brewery going into the former Snow Tire on Hancock, looks to be brewing in February and serving in March.

Five Points saw the opening of Grindhouse Killer Burgers on Lumpkin Street, which added another full bar to the neighborhood as well as superlatively cooked small burgers and well-spiced fries; Marker 7 Coastal Grill, a kind of fancy seafood shack with a great patio; and, soon, both an outpost of the Atlanta breakfast franchise J. Christopher’s and, perhaps as early as this month, Cinco y Diez, Hugh Acheson’s Mexican project in the old Five & Ten space with Farm 255’s Whitney Otawka running the kitchen.

Boulevard and Normaltown experienced a particularly high rate of growth this year, with new ownership of the Bottleworks welcoming new tenants to the former Coca-Cola bottling plant. A Tavola closed there, but Hendershot’s happily took its space and added a full kitchen to create more food options. Viva Argentine moved into what had been a Quizno’s in late November, and Seabear Oyster Bar is penciled in for the spring. Farther down the road, Rustica closed and Hi-Lo Lounge moved into its nice, big space. Next door, The Old Pal took over Jewels, doing a nice build-out and serving craft cocktails. Across the street, Ike & Jane added dinner three nights a week, more than compensating for Normal Bar’s loss of Farm Cart on Thursdays, and, even more excitingly, the Pizza Hut on the corner relocated, making way for Matt Palmerlee and Eddie Russell’s Taco Lupo, coming sometime in 2014, provided they can create seven off-street parking spaces.

On Broad Street, heading out from the middle of downtown, Quickly closed; Saucehouse, a franchise BBQ concept, planned to take over the former Peaches (which will soon reopen in the Homewood Hills space that’s now The Camp); Steak ’n Shake opened to long lines; Botanas opened and then closed in record time in the former Mexicali Grill; Taj Mahal moved to a new location near the Alps/Hawthorne/Broad intersection; and Opa Robby’s Market started selling country-store-type items in front of Target.

On Baxter, Silver Lining Cupcake Co. closed, a sad loss, as was that of the Harris Street Locos, soon to be replaced by Troubadour Pub and Grill. Fat & Happy BBQ operated briefly before also closing, and YoDawgs closed as well. Groucho’s Deli opened near the dorms, as did Pizza Hut, which serves pizza by the slice in its late-night hours and has a small music venue (!). Always Baked Cookies, which has been downtown in Athens Bagel Co., planned a new venture aiming for the last weekend in January in the old Yo Dawgs location, with more than cookies. In the Beechwood area, Tin Drum (casual pan-Asian franchise) and Zoe’s Kitchen (casual Mediterranean franchise) both opened.

Elsewhere in Athens (and a bit farther), Richard Miley opened Catch-22 Gastropub on Epps Bridge Parkway, adding an actual, non-franchise option to the area; nearby, both Cook-Out (fast food from North Carolina) and Popcorn Haven opened; Wingspan started cooking hot wings and burgers in a trailer on Chase Street; Normaltown Cafe returned, this time to Danielsville; Junkyard Dawgs opened on Commerce Road, in a former Huddle House; Rooter’s Grocery and Barbecue took over the tiny grocery on Whitehall Road once home to Jot ‘Em Down; One Cafe briefly occupied the former Hendershot’s on Tallassee; Golden Chick opened in Watkinsville; and La Cabaña de Don Juan opened two locations (one on Hawthorne in Athens and one in Watkinsville, where Tlaloc #2 had been). Los Coyotes, on Mitchell Bridge Road, shuttered (soon to reopen as a gastropub), and Donderos’ Kitchen, on Milledge Avenue, moved next door to a bigger, better space.

Yet to come in 2014 are La Puerta del Sol (we’ll see about that), Bruno Rubio’s restaurant on the Eastside that has been in the works for getting on to a decade now; Rashe’s Cuisine, Jamaican on Tallassee at Mitchell Bridge; a location of franchise Chicken Salad Chick, Taqueria Tsunami and Gigi’s Cupcakes’ second location in Epps Bridge Centre.

New Year’s Wishes: After a year marked by cocktails, juice and the triumphant return of carbs, with not one but two gourmet Mexican concepts opening in the somewhat near future, I still wish for Korean (more than one option), for more tiny and focused concepts that make use of small spaces, for someone to take over the restaurant space at 255 W. Washington who will treat it right and make it work (bars are great, but it would be a shame to waste that kitchen), and for Athens to move in the direction of democracy rather than the clubby, pop-up restaurant scene that has become the norm in other cities. Everyone should be able to get something wonderful to eat and reliably so, not just those who pay hyper-attention to the comings and goings of the connected. Part of what makes our town a special place to live is the warmth of the community here, the lack of being required to wear a tie to eat well and the ability to experience something great without knowing exactly the right person. Let’s keep it up, y’all.