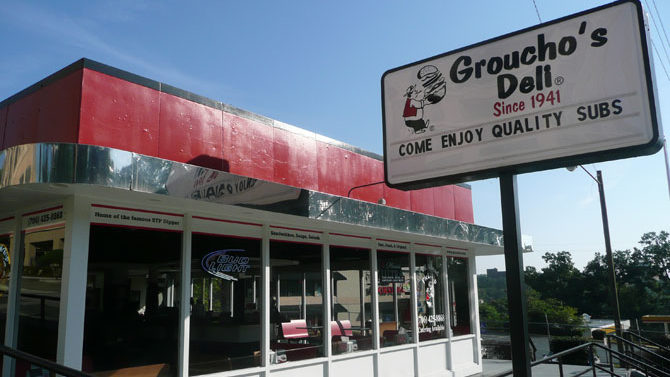 FRANCHISE COVERAGE, PART 1: Y’all, I know no one loves it when I cover chains that have made their way into the Athens area, be they good at what they do or not, but the fact is that not enough locally owned restaurants open here for me to cover the equivalent of one a week, every week, especially when I aim to give new places enough time to get their act together. So, if you’re a hyper-localist rather than someone who cares first and foremost about your stomach, you can go ahead and tune out.

All those caveats in place, Zoë’s Kitchen (145 Alps Rd., 706-850-3400) is surprisingly good. I had eaten at one in Buckhead a few years ago and somewhat forgotten it, but the nice thing about Zoë’s, in addition to its having replaced the Wendy’s that was on the same lot, is how much it feels like an actual restaurant. Yes, it has a drive-through (although it’s only for call-in orders), and you order at the counter, with a big plastic menu board telling you the options. You pick up your own napkins, straws and silverware, but if you’re eating in, you get a real fork, not a plastic one, and a real plate. The line moves smoothly. The food is ready quickly, but, like the utensils and the plates, it feels real. There is something about the restaurant that is not constantly trying to upsell you and assault you with social media. It’s not exactly minimalist, but it is also not annoying, and it seems like the future of fast food.

The choices are fairly fresh and uncomplicated: salads, sandwiches, soups, all with a Mediterranean emphasis. You can get a turkey Reuben (called a Grüben) that has all the zip of the real thing, to where you don’t even miss the corned beef. The chicken salad sampler is a fine way to try a bunch of options, combining an uncomplicated but not too mayo-y chicken salad (or egg or tuna) with pasta salad (basil, feta), potato salad (no mayo, red potatoes) and a slaw that is perhaps the best thing in the restaurant (no mayo, feta, scallions and a fine, zingy dressing that doesn’t overpower).

Nothing feels dunked in industrial salt or dosed with MSG, there are lots of options for vegetarians and the gluten-free and, although it’s not quite the same as a singular institution with quirk and flexibility, Zoë’s is more akin to Chipotle than to McDonald’s. It’s open every day for lunch and dinner and has no booze but does catering and takes credit cards.

FRANCHISE COVERAGE, PART 2: Groucho’s Deli (396 Baxter St., 706-425-8868), which renovated the former Sudz laundromat, is a little less exciting, but it has its own place. Contrary to its logo, which pictures a man holding a sandwich approximately the size of his body, its portions aren’t huge, a somewhat welcome tendency in the franchise-deli field.

Groucho’s is based out of South Carolina, but its founder hailed from Philadelphia, and that’s exactly what its sandwiches resemble. They’re sort of wet and sloppy, although weirdly light, considering that they consist mostly of thinly sliced meat and a bit of cheese (usually melted), with dipping sauces heavily promoted. Maybe it’s the bread, which is airy and soft rather than dense. The STP Dipper (roast beef, turkey, melted Swiss and imperceptible bacon crumbs, served with “Formula 45” sauce, i.e., your basic mayo-ketchup combo but with a little more kick) isn’t all that different from the Mid East Special (pastrami, bologna, provolone, salami, oil and vinegar dressing), which isn’t all that different from the Big Dipper (roast beef and ham with cheese) and so on.

If you want to mix it up, you can get bleu cheese for your dipping sauce instead of Formula 45. But they’re not bad, and they’re made with speed. It’s not quite Jimmy John’s in terms of the serving time, but it’s close. Everything comes with a bag of the housemade potato chips, thin, mildly salted and not super exciting, but improved by dunking in the aforementioned sauce.

The space is a bit odd, with a separate area for take-out orders separated by a door from the main eat-in room, and the steep parking lot can be treacherous (enter from Baxter and exit on Pope). The rewards system, which the staff pushes hard, will quickly entitle you to free cookies, etc. Groucho’s also does salads, serves beer, has TVs to show the game, does catering, takes credit cards and is open every day for lunch, Monday through Saturday for dinner.

WHAT UP? Little City Diner, from the folks behind Big City Bread, is open in Winterville at 135 Cherokee Rd. Grindhouse Killer Burgers is open on Lumpkin, just down from Five Points, serving beef, turkey and veggie burgers plus boozy milkshakes. Little Bull is open in the former Grilled Terikayi space downtown. Mimi Maumus’s home.made catering, which had opened for lunch on Baxter, then closed due to parking complaints from its neighbors, is open again for dine-in. (Parking is now available next door at The Sultan and across the street, but not in front of the businesses adjacent to home.made.) Popcorn Haven, a retail store offering a kajillion flavors of popcorn, is open on Epps Bridge Road. Botanas and Quickly, both on Broad, have closed.