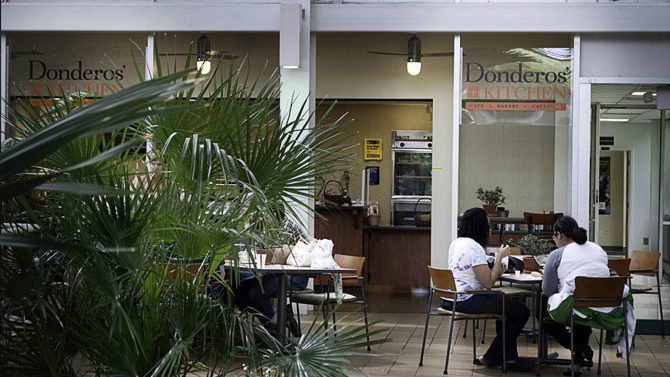 Think Small: If the flaw of Donderosâ€™ Kitchen (584 North Milledge Ave.) has always been its multifariousness, the strength of its new offshoot at the State Botanical Garden of Georgia (2450 S. Milledge Ave.) is its focus. The cafÃ© at the Botanical Garden used to be downstairs in the visitor center, reached by locating the winding path to the lower level, and has rarely been well executed. The space felt industrial, in contrast to the lovely view out the windows, and lonely. Its move upstairs, into the big, open atrium, was a smart one. The cafÃ© now occupies a nook in the wall, with a few tables outside its immediate purview and some more scattered around the patio outside the doors. It feels low-key but friendly, with no-pressure counter service that makes good use of its small space. Recycling, for example, is labeled clearly and distinguished from trash, making conservation-minded folks happy.

About six different sandwiches are wrapped and ready to go, including a hummus and roasted-veggie concoction on flatbread that is fairly disappointing (mushy, bland), but also a signature creation called â€œGoat in the Garden,â€ a wrap that combines goat cheese, roasted beets and spinach with a bit of vinaigrette and tasty results. There are options that include meat, too, like a turkey club and a ham and Swiss on rye. The soup of the day might be mulligatawny, as it was recently, which tastes of fresh spices. A light, not oily version of cold sesame noodles can make for a good lunch, too, either with chicken or just with veggies, and itâ€™s a measure of the reasonably high standards of the place that the broccoli it includes is crisp and green, not wilty and brownish the way it often is.

Lots of little snacks and baked goods can be purchased as well, and the counter help will not only cheerfully ring you up but make you a coffee drink, a hot tea or a Mexican hot chocolate to order. The prices are good and the atmosphere pleasant (sociable without being squished up against your fellow diners). Donderosâ€™ also does catering and is open Tuesday through Saturday 10 a.m. to 4 p.m. and Sunday 11:30 a.m. to 4 p.m. (closed Mondays and all UGA holidays). It takes credit cards and is alcohol-free.

Think Different: Athens has exactly two East Asian grocery stores that Iâ€™m aware of, and they happen to be right across the street from one another, on South Milledge. One is Fooks Foods (2026 S. Milledge Ave., in the Shops of South Athens), which has been around a fairly long time, educating Athenians on kimchi, fresh vegetables and a wide variety of noodles, and recently moved from its original Baxter Street digs to this larger space. The other is the unfortunately named and much more cramped Oriental Market (2017 S. Milledge Ave.), which nonetheless offers its own specialties and reasons for popping in. Presumably, the locations of both are dependent on the large population of East Asian graduate students who reside in UGAâ€™s Family Housing and the other apartments and condominiums in the area, but the clientele is more varied than that.

Both are good for picking up a range of canned curry pastes, noodles made with rice or wheat, tins of sardines, frozen Chinese sausages and meatballs, frozen dumplings, and unusual snacks (e.g., octopus-flavored chips) and stocking stuffers. Fooks has a much larger refrigerated/frozen section, with sliced pork belly, interesting popsicles, fish, tofu and more. It also has a small bulk-foods section, handy if you donâ€™t want to buy a giant sack of rice, and a proprietor (Karen Fook) who can direct you to what youâ€™re seeking. If you want a Benriner mandoline at a good price, Fooks is the place to go in Athens. Ditto if youâ€™re looking for the fresh ingredients to complete an East Asian dish, such as bamboo shoots. It is, however, closed on Mondays (open Tuesdayâ€“Sunday 10 a.m.â€“7 p.m.).

Oriental Market, on the other hand, is open every day from 10:30 a.m. to 7:30 p.m. Its selection is more limited in most ways, although it does have a large number of different canned textured gluten products mimicking various meats. I have an aim to go back and sample all of them in case one happens to be the elusive sue gai or sue yu once served at Thai of Athens. Its sale items are particularly notable. Clearly, someone must have access to a pecan tree, as I cannot come up with another plausible explanation for the jam-packed Ziploc baggies of shelled, halved, perfect pecans retailing for a mere $1.50 each. Boxes of banana chips may delight your children, although their healthfulness is questionable.

Neither establishment is exactly Super H Mart or Mega Mart, both of which are Korean hypermarts with locations in Duluth and unbelievable deals on organic produce, fresh tofu, mattresses, all kinds of Tupperware, fresh meats and more. But both of the local groceries are easily accessible by bicycle or bus, which makes them appropriate for Athenians seeking something out of the ordinary. Both take credit cards.

What Up?: Athens Bagel Co. on Jackson Street will open on Apr. 18, but will save its grand opening for May 1.