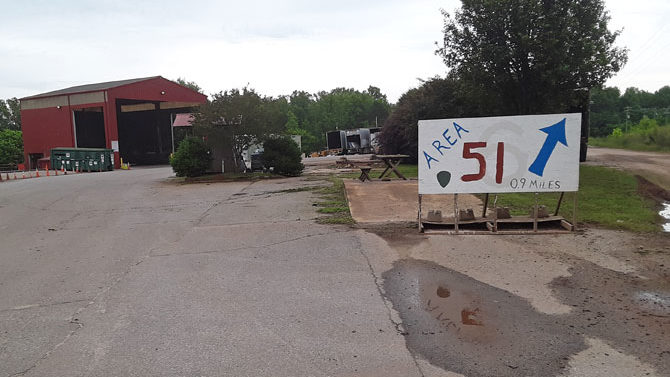 Are aliens sequestered at the landfill?
by Doug Monroe June 10, 2020

I’m practicing the gentle art of Swedish death cleaning in my west Athens duplex apartment because I’m old and might die during the COVID-19 plague. I would be terribly ashamed for my grown kids to deal with my clutter after I inevitably cough myself to death because I went to Publix that one time.

The Gentle Art of Swedish Death Cleaning, the timely book by Margareta Magnuson, is about getting your affairs and homes in order before you croak. To start, I took a bunch of crap to the Athens-Clarke County dump on Lexington Road last week. And, be warned: You have to make an appointment. The landfill requires you to stop and pay by check ($10 for me), no cash or credit cards, before you proceed to the hulking building where you fling your crap on the floor. Before I even got there, I was stunned to see a sign with an arrow pointing to “Area 51” only 0.9 mile away.

Area 51 is the highly secretive base in Nevada said by conspiracy loons to house a UFO that crashed at Roswell, N.M., plus the remains of dead alien pilots. It’s where the U.S. develops its sneakiest spy craft.

Was there some secret outpost here in Athens? I dumped my stuff and shouted to an inmate cutting weeds, asking if I could see the UFOs. “Naw,” he said. “It’s just somebody being funny.” I said, “Good! Funny is good!”

I realized that such a sign could only be erected in a quirky place like Athens. I posted the picture on Twitter and said, “I love this town. Reason #Infinity.” I left Athens in 1971 after graduating from UGA and working for the university. I moved back in 2015 after a couple of near-death experiences.

As I left the dump, I remembered that Flagpole’s vital Grub Notes blog post “Where to Eat While Sheltering in Place” reported that Little City Diner in Winterville is open for safe pickup and patio dining. I took a right and floored it. I used to meet my daughter, Caroline Boyd, for lunch there when she worked at Merial. She now works elsewhere on a big COVID-19 project while nursing a 4-month-old girl and trying to homeschool a kindergarten boy who has gone rogue. When homeschooling started, he ran to his room shouting, “You’re not a teacher! I want a new mommy!” I’m on his side. Let kids play, for God’s sake.

I took a picture of the restaurant and my outdoor lunch—cheeseburger, half salad, best fries EVAH—and sent them to Caroline to taunt her. She doesn’t think I’m the least bit funny. I had enough food left over for dinner; always a plus for the elderly.

During lunch I gasped again. I was running late for an appointment with my wonderful house cleaners, Peachy Green Clean, whom I discovered in a Flagpole ad three years ago. I only recently learned that the founder of Peachy Green is Athens-Clarke County District 1 Commissioner Patrick Davenport. He showed up by himself last week, masked and gloved, and left my place spotless. On the way out the door, he stopped to admire a framed copy of Caroline’s country CD Ghost Town, which she recorded in 2006 as Caroline Monroe.

“I remember her!” he said. I was ecstatic. Caroline played on the main stage at Athfest in 2007, as well as a lot of clubs, and landed her “Trailer Park Hall of Fame” on the Best of Athens CD. I co-wrote the song with producer Fester Hagood and Caroline.

After the commissioner left, I started cleaning out the 12,000 emails in my Gmail inbox and stumbled upon a picture of myself with the great Athens-based musician Randall Bramblett, who played on Caroline’s CD at Blue Moon Studio in Watkinsville. The picture was taken before I was a human ruin. I also interviewed Randall for a story I wrote about Nuçi’s Space for Creative Loafing in Atlanta. He is one of the world’s nice guys, as well as a musical superstar.

I was so proud that I posted the picture on my Twitter page. I followed Randall, and he followed me. I realized he might be offended by some of my horribly profane leftist opinions on Twitter, so I deleted some of the worst, which would also offend my family’s Trumpkins if they tweeted. They only do Facebook.

I hope I run into Randall again someday, once I can walk around without a mask and gloves. I might. It’s still a small town. I’m still alive. I love it.

Doug Monroe started a 50-year-writing career at the Red and Black. He still tries to write when he’s not complaining about his health.