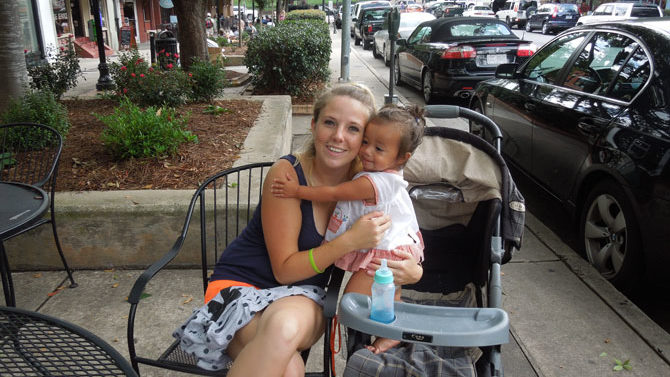 Tonya Hart and her beautiful baby girl, Gabriella, were sitting at the corner of College Avenue and Clayton Street when I approached them. In all honesty, Gabriella was so precious, I had to stop and introduce myself. The two of them were just killing time while waiting for Shane, her four-year-old son, to get out of school. Tonya was in surprisingly good spirits, even though she had just received a $681 bill for a 10-minute hospital visit and a dose of Motrin for Gabriella. The doctor’s diagnosis: to buy some saline for her runny nose.

Flagpole: Where do you live around here?

TH: I’ve lived on and off in Athens for a pretty good bit of my life, but I’m from Commerce.

FP: And did you go to school here?

TH: Right now? I am a stay-at-home mom. I’m a full-time homemaker. I have a daughter who’s 13 months and I have a four-year-old son.

FP: Well, how do you like being a stay-at-home mom?

TH: Um, of course, you know, I’d like to be out working and making money and, you know, enjoying life, ’cause I’m only 25. But I think every bit of the time I get to spend with Gabriella and Shane, you know, I enjoy it, and I wouldn’t trade it for nothin’.

FP: Did you have jobs outside the home before?

TH: Yeah, I’ve worked mainly factory jobs. My last job was over at Pilgrim’s Pride. I cut wings over there. And that’s pretty much it.

FP: What was it like working at Pilgrim’s Pride?

TH: It’s very hard work. It’s very, very hard work and it’s very… I don’t know how you would put it… If you was to do it for a long time, you’d, in the long run, probably regret it. It’s really hard work. [A woman walks by and says “Hey, cutie” to Gabriella, who’s getting antsy in her stroller.] Say “hola.” [Tonya says this to her daughter in a baby voice and laughs.]

FP: And you worked other factory jobs?

TH: It is a tractor [manufacturer] that comes from Japan. You know, there’s tractors, there’s loaders, they have all sorts of heavy equipment. I inspected 19 different parts of the tractors that run on the assembly line. So, that was pretty awesome.

FP: What kind of parts did you inspect?

TH: Just stuff like the coolant, the fluids, the nuts, the bolts. Just different little pieces. ‘Cause, see, it starts from ground zero, which is just the frame, and then it goes to the endpoint, which is the whole tractor. And I was on, I think, um, I think I was in space 24 or 27.

FP: And so did that become monotonous or was it interesting?

TH: Um, it was interesting. Kubota was interesting. The Pilgrim’s Pride was monotonous. Like, you couldn’t move around. See, with the Kubota, I was able to get up and down and go around. Well, when I cut wings, I stood in one place for eight hours cutting wings on my left side and my right side. I think it was like 17,000 birds a day, 36 birds a minute.

FP: Wow. And they are making sure that you make that quota, is that how it works?

TH: Yeah, yeah. They go by a certain quota everyday. They try to get to a certain point. And then, you know, Saturdays, sometimes you have to work Saturdays if you don’t make the quota. It was pretty cool, though, at first, it just got tiring and old.

TH: Yeah. You have to worry ’cause you’re standing right in front of someone. You know, there’s one person here, one person here. One cuts the left; one cuts the right. Which, you switch off during the day; you actually switch off two times. But, someone’s standing right in front of you with a knife. So, [laughs] it’s kind of dangerous. Yeah, it’s crazy.

FP: Did you ever cut yourself?

TH: Actually, no, but someone cut me.

FP: Do you get the day off when that happens or do they…

TH: No, they take you and they drug test you, and then you go back to work. [Laughs]

FP: Oh. Wow. But you said working at Kubota was more interesting?

TH: Yeah, it was pretty awesome. You got to see how the tractor was put together.

FP: It sounds interesting. Did you learn some stuff about tractors?

TH: I did, but that was in 2004, so I kind of forgot it since then. [Laughs] But, yeah, it was awesome. It was probably the coolest job that I ever had.

FP: How long were you there?

FP: And you stayed in that area the whole time?

TH: Actually, I started at the end just writing down the pieces that were missing, and then once I got good at that, they moved me onto the line.

FP: Do you have family around here?

TH: Yeah, my dad and brother and mom live here… Where we’re originally from is just 22 miles away, but Athens is more exciting, more to offer. Commerce is kind of quiet. It’s growing, but…

FP: What are the amenities in Athens that drew all of you here?

TH: Just there’s always something going on, it’s not quiet. We’re from the country, you know, so we’re pretty much used to quietness. You know, the people are pretty awesome.

FP: Are you excited for your children to grow up here and go to school here and things?

TH: Um, I would like to move to California. I just want to move to the beach and to a different coast. You know, I’ve been to the East Coast but never seen the West Coast, so… And it’s just completely across the world, so. ..

TH: I do; I actually went to Mexico with Gabriella’s dad. That was kinda awesome—awesome and crazy at the same time… I went to Celaya, Celaya Guanajuato.

FP: Where is that?

TH: It is about 14, 16 hours into Mexico, once you cross over from Texas into New Laredo.

FP: When did you go there?

FP: Ok. Wow. So, there are all these warnings on the news about how dangerous it is and everything. Was that a concern?

TH: No, it was awesome. We had a great time… Her dad is from a little subdivision there, and there’s different ones that surround his. But I had a good time. I’d like to go back—we may go back.