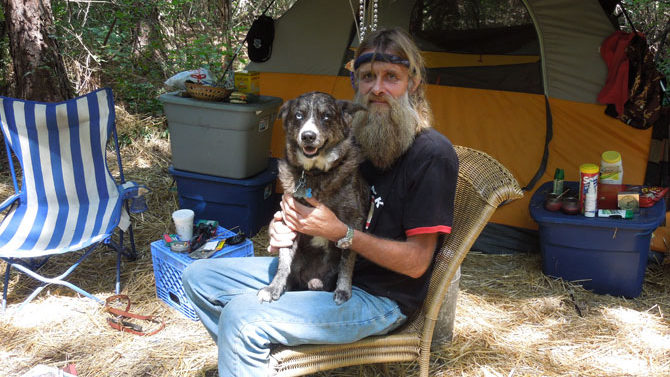 Johnny and his best friend (his dog) Cheeseburger are particularly friendly. I talked to Johnny for a while the first time I met him. He had so many stories to tell, like how he had a car, but couldn’t get a license, so he sold it to a paper delivery guy on the condition that a copy of the Athens Banner-Herald be delivered every morning to the end of a path into the woods where he lives.

Flagpole: How long have you been homeless?

Johnny Veasey: Oh God, off and on for years. I’m what you call “chronically homeless.” But I’ve come here to Athens to retire from all that crap and get my life together. I got one of my old jobs with Dixie Paint when I got back here, and then when the economy fell, I got laid off. To keep from screwing my credit up, I left my apartment, thinking [Cheeseburger and I] would go to a shelter. No, they wouldn’t let me with Cheeseburger. He’s all I got.

FP: What other jobs have you had?

JV: My daddy was a jeweler and a politician, treasurer of the Legion Hall, treasurer of the Masons, you know Masonic Lodge. When people find that out about me sometimes, they have a little more respect because I’m like the “parliament’s son,” [laughs] or whatever they call it. You know how the Mason thing goes, it took me years to find out… I grew up in a jewelry store, sized rings, engraving. I had a suit and tie on during the day and at night, at six o’clock to two in the morning, I had a titty dancer onstage at one of the biggest clubs back there. I was very popular. I DJ’d there. I used to be very popular. I had a lot of chicks around me. I didn’t even know what I had, but I had all my teeth and was 20 years younger, oh yeah. That was in Phenix City [AL]… I guess it’s a good thing to draw people around you if you can and just represent the little man in the sky. Or just live your life as a good person—to be a good person and express that to other people. And sometimes people take my advice. I don’t always give advice, but they ask me… Sometimes people need somebody to talk to. Even in my hitchhiking things, I had a man pick me up on the 280 bypass in Phenix City. He said, “I never pick up hitchhikers, but I needed somebody to talk to.” And he says, “When I drop you off, I’m fixing to kill myself.” I said, “You’re a businessman, and what’s wrong?”  He said he was going from, I think he said, a two- or three-hundred-thousand-dollar home to like a 30- or 40-thousand one. He was cheating on his taxes, and his wife didn’t know. But after talking to him after about a 20-minute ride, I really believe I changed his mind about suicide. He looked at me and he says, “I got a way of making $1,000 a day, but you don’t have nothing. How are you so happy and content?” And I just tell him a prayer a day, a meal a day, you know. If I can believe in God anybody can, ‘cause God has his hand on me. It’s hard to accept that sometimes. I really believe I convinced him, I astonished him that I was happy and content with the way I am.

FP: So, what does your average day usually look like?

JV: The first thing I do when I wake up is thank God for waking me up. You know, “God, I gotta pee real bad. I’m pissed off at you, but I thank you for waking me up.” You gotta have prayers that are real. So, anyway I get up, have a little coffee. I come back here and read—I’m the only homeless guy I know that has a paper delivered to him at the end of the trail every morning—so I like my morning news. And then if I have to, if I don’t have any work, I go out there and hold that ungodly cardboard sign… Being homeless, you do what you can. I hold a sign. It’s not “Oh homeless, oh, poor me.” No signs like that do I hold. I hold the funny, good signs. I hold the happy-feeling signs like, “Vision: Juicy Cheeseburger,” the back side, “Coors Light and Fries.” So, I’ve been flying “Green Go Needs a Taco.” I got one that says, “Don’t worry, I don’t bite.” But then if you read it and you look cool, I’ll flip it over sometimes, “Unless you want me to.” I do what it takes to make a dollar—I mean every day. But I get jobs, too. I’m a great painter. I’m trying to get my disability, and there’s a lot of things I can’t do that I used to be able to do, like I used to paint church steeples. There’s some things I just can’t do because of my heart issue… I’m just doing what I can to make it. I mean, it’s degrading to get out on that corner holding a sign and it’s illegal. I mean, I’ve had a couple of tickets, but they pretty much leave me alone. Now, I’m not a narc[otics officer], but I know some of the police. I’ve painted for them and been in their house, and they trust me. That’s good when the police trust you. They don’t see me in the wrong drug-infested neighborhoods doing the wrong stuff.

FP: And what’s it like living out here [in the woods]?

JV: Some people envy me. Sometimes they tell me I’m on vacation. But it’s not as easy as what you think. It is cooling off a little bit, but winter times are easier than summers. People are more generous out there, but not only that, there’s only so many clothes you can take off. With the chiggers and the mosquitoes… Last year in Athens there was 39 cases of rabid raccoons. So, I don’t leave open food around. Now, I do feed the neighbors’ cats—they come around, two or three of them—I usually throw food over there, but luckily, knock on wood, I haven’t seen any raccoons. It’s kind of scary. I know the ropes. I’ve been homeless in different states, different places. I’ve seen a lot out here. There’s a lot of good people; there’s a lot of bad people. Even in Athens, there’s a lot of people that like me, but there’s a lot that don’t… To each his own—what works for me might not work for somebody else. So, I get along pretty much with everybody. But you have to be like that to be an Athenian. Is that what they call people, Athenians? But I do like Athens. I’ve been homeless in other towns and I’d much rather be here in Athens than Baton Rouge [LA] or Houston, you know, places like that. Or Atlanta. I hate Atlanta, oh God, I hate Atlanta.

FP: You were in Baton Rouge?

JV: Yeah, I was on the other side of New Orleans in Zachary in between Baton Rouge and New Orleans. I was there when Katrina hit. Oh, God, yeah, but our water level was nothing like New Orleans. It was still bad, but…

JV: It was real chaotic, extremely, extremely chaotic. There’s a lot of stealing, a lot of crime, people walking around with guns on them all the time, trying to protect their property. It was devastating. It’s still bad…

FP: What kind of services are there here in Athens for homeless people?

JV: There are a lot of services for the homeless around here, especially if you don’t have a dog. So, I’m limited on some of those things. And sometimes they treat you like crap. Before I had Cheeseburger I stayed at one in Austin, Texas. You could smell the bacon cooking. Stomach growling in the morning, you know. You go down there, and they give you a bowl of oatmeal and day-old bread. You turn the bowl of oatmeal upside down; it don’t fall out of the bowl. And they’re back there eatin’ all the goodies. So, one of my goals in life is to, well, I wanna meet Vanna White. I really do. I wanna meet Vanna White. God, I love Vanna White. And I also want to open a homeless shelter where people can have their animals. And they can leave their animals there in a safe place, and they can go and seek work to better themselves.

FP: And you’ve had Cheeseburger 11 years?

JV: Over 11 years. He was about as big as this [paper coffee] cup when I got him. He’s been with me ever since. Oh, he’s been to jail in like four or five different states. And if you go to jail, you better have somebody to get your dog because they will euthanize your dog after about three to 10 days.

FP: It seems like you know a lot of people around here.

JV: I know people, and they know me and Cheeseburger. People say that Cheeseburger’s the most famous dog in Athens after the bulldog… I got invited to this wedding—Cliff, he works over at Chick-fil-A invited me to his wedding. I got me a sports jacket, got my boots on—you know, I’m looking good. And Vince Dooley’s like right over there [he points to a spot two feet away]. The pastor taps me on the shoulder—you know when you go to these highfalutin’ weddings, you stand in line, you sign the book, they seat you—the pastor, “Oh, you clean up nicely,” he says. But I went to the wedding. I didn’t want to go at all, but I went out of respect for Cliff, he does a lot across the world to help people. He did that to treat me like a real human being. After I got to sittin’ here thinking, he did that out of respect for me. And he let everybody know that I was a real human being ‘cause I was the only homeless cat at this highfalutin’ wedding.

FP: Have you thought about cutting your hair and shaving your beard? Why do you keep it all so long?

JV: Well, for one thing, it helps keep the bad people off of you, ’cause you look kind of rugged. I will fight if I have to, but it helps. I remember one time my cousin out in California—she always pays me to leave—she gave me one time a lot of money to shave my head and cut my beard, and I haven’t done it since then… Plus you’ve got the ZZ Top look. A lot of chicks like a bearded man.