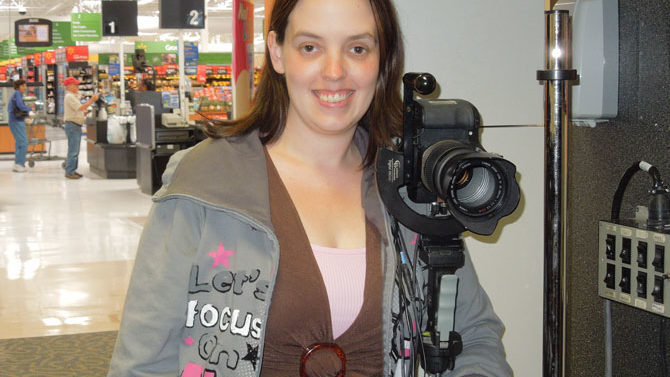 When I was little, I hated having my picture taken with my two brothers, mostly because it seemed to take forever. I think once we all were old enough to protest, my parents only made us pose for the occasional photo.

But Kimberly Harding has enough patience to take children’s portraits for a living. While she says she loves to photograph “memories,” especially for new mothers, Kimberly is also studying to become an ultrasound technician. Perhaps she’ll soon be capturing a new kind of memory for mothers-to-be.

Flagpole: So, you work as the photographer here?

FP: When did you start getting interested in photography?

KH: After I had my first daughter.

FP: Was it because you were interested in taking pictures of your daughter?

KH: Yes [laughs]. Then, I just got a part-time job working at Sears and I’ve been doing it ever since.

FP: What do you like most about this job?

KH: The babies. All the little kids. Capturing their smiles, it’s amazing. Especially with new moms, when you get their pictures and the moms are crying. It’s the memories, I guess, that you capture, and you get to be a part of it.

FP: Does it ever get difficult to photograph children?

KH: Yeah [laughs]. You have the two-year-olds that won’t sit still and will run out the door. They’re scared, usually, at that age, because they think of us as the doctor’s office. It takes lots of patience.

FP: So, where are you from?

KH: I lived in Danielsville, so not far.

FP: Why did you move here?

KH: I found a house.

FP: Had you been living in Danielsville all your life?

FP: So, you left Georgia for a little while?

KH: About a year… I wanted a new start. We went to Modesto, about an hour from San Francisco, I think.

FP: Was there any reason for that location?

KH: Actually, we flipped a coin. It was Christmas day. It was between California and Tennessee, and California it was, so we packed up and left.

KH: Me and my husband and our three kids at the time.

FP: So, was that a big adjustment?

KH: [laughs] Yeah. That’s why we only made it a year. Because it’s not… I guess when you’ve been brought up in the South and you go to some place like California, it is completely different.

FP: What was so different about it?

KH: The people. I mean, living out there, it’s beautiful. And there’s always stuff to do. ‘Cause I think we drove an hour one way and you’d be at the beach, drive an hour the other way and you’d be in the mountains. But the people… are really rude. And it’s a lot of little things like, when you walk in here, you expect me to say, “Oh, hey, how are you doing?” And I couldn’t tell you how many times, like, I walked into a place and the associates would be talking and cussing. And you just don’t see that here.

KH: Just to get used to that. And, like, our neighbor’s house was broken into and the cops never came out… They said, “We’re too busy; we’ll be out tomorrow.” And we didn’t live in a bad neighborhood; it was just, you know, so many people. My husband watched someone steal a car one time and called the cops and said, “No, they’re still in the car. They’re pushing it backwards and they’re breaking into the car.” And they never came out… I don’t know, I just couldn’t get used to that.

FP: You weren’t planning to leave after a year?

KH: No [laughs]. Having kids, I’m used to being in the country where the kids have a yard. You know, just things like that. And in California it’s just apartments, and your next-door neighbors are within arm’s reach.

FP: So, you wanted a new start, but why was it between California and Tennessee?

KH: [My husband] had family in California; his dad’s there. Tennessee, we’ve always just thought it was beautiful up in the mountains. It’s a great adventure. I think everyone should do it once—to start over. It’s fun [laughs].

FP: Do you think your kids are planning on sticking around in Athens?

KH: No [laughs]. I’ve got one that’s a 17-year-old; she knows everything, so she’s ready to take off. You know what I mean? And my 12-year-old wants to be a marine biologist. She says the best school is in Boston, according to the Internet [laughs]. So, looks like Boston.

KH: Yes. She informed me yesterday that Boston has the best marine biology program, and that’s where she’s moving…

FP: Does she know that from looking online?

KH: Yeah, she just researches it. And at school when they can check out books, they’re always about turtles. She’s really smart; they actually tested her for the gifted class for next year.

FP: Other than taking photography and working here, what else do you do with your time?

FP: Oh, wow. What are you in school for?

FP: Where do you take classes?

KH: Mountain State University. It’s in West Virginia, so I do it all online.

FP: How has that experience been?

KH: Oh, I love it. ‘Cause I can do it after the kids are in bed. It gives me more flexibility… I take two to three classes every eight weeks.

FP: How exactly does it work?

FP: So, you actually have a class? You can get to know actual students?

KH: Yeah. And there are several of us that are in there for the same things, so each semester we’ll end up taking the same classes together.