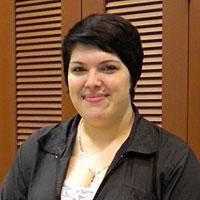 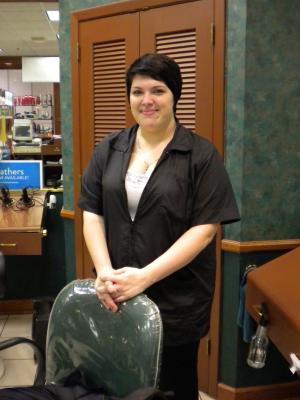 To me, there’s nothing more everyday than the mall. So, after hunting for a belt and grabbing one of those sugary pretzels, I decided to stop by the MasterCuts with the hope of talking to a stylist.

I had the pleasure of chatting with 24-year-old Jessica Ross, who has been cutting hair in Athens for the past three years. After growing up in Madison County, Jessica is happy to be living in the city, working at MasterCuts and hanging out at the pool hall with her husband. She is not afraid to look a little different and is pretty much willing to try any new hairstyle, as long as it’s not the ’80s poof.

Flagpole: How did you get started in cosmetology?
Jessica Ross: I kinda always wanted to do it my whole life. Just kinda went to school a couple years ago and been doing it ever since.

FP: Did you go to school here in Athens?
JR: Yeah, I went to Georgia Institute of Cosmetology over there beside Academy [Sports].

FP: What was that like?
JR: Um, it was different. I mean, It’s only a year of schooling, but it was definitely stressful. People’s hair is easily damaged, so learning the different techniques, whether to, you know, use certain volumes with color, stuff like that. It was kind of a lot.

FP: Did you ever mess up anyone’s hair?
JR: I haven’t yet. Knock on wood.

FP: Are you from around here?
JR: I’m from Madison County, but I live in Athens now.

FP: What was it like growing up in Madison County?
JR: Well, it was different, very different from the city. It’s kind of super country and, I don’t know, people aren’t so understanding about different people, you know what I mean? Like, if you had differences like tattoos and piercings and liked different color in your hair and stuff like that, it was kind of not so [well] looked upon… like, in the city, it’s kind of like the normal, everyday thing.

FP: I see you have piercings. Do you feel more comfortable in Athens?
JR: Yeah, I do. Yeah, definitely.

FP: So, where do you live around town?
JR: I live off of Cedar Shoals, on the Eastside.

FP: How long have you lived in Athens?
JR: In Athens, probably about three years.

FP: How do you like Athens?
JR: I love Athens, period. I mean, I love it a lot more than, you know, of course, Madison County, but it has its diversities, you know. It’s more accepting, so I like it more, but it’s still… of course, like anywhere else, you have your frustrating times.

FP: How do you feel about the dynamic here with the university?
JR: It’s sometimes frustrating, with, you know… I don’t know, you get a lot of college kids… Nothing wrong with college kids, but…

FP: Where do you hang out?
JR: If I go out, usually it’s at the Rail, or Brass Rail. It used to be called Brass Rail, but it’s like shooting pool and stuff like that. That’s pretty much my hangout spot.

FP: Where did you meet your husband?
JR: In high school.

FP: So, you’re high school sweethearts?
JR: Uh, kind of. We got married after school. We were friends in school.

FP: How long have you been married?
JR: I got married when I was 18, so I’ve been married for five years.

FP: What kind of person were you in high school?
JR: I was always, I don’t know, I wouldn’t say different, but I was more of the person that talked to everybody and didn’t really have set people that I talked to. I was kind of really outgoing.

FP: Is this the first place you’ve worked with your cosmetology degree?
JR: No, I used to work at Kids Doos off of Jefferson Rd. It was only for 11 months. I was there the whole time it was open, and then it closed. And then this is my second place.

FP: Were there any interesting experiences there?
JR: Kids are kind of different to do. We had, like, screamers, we had biters, we had kids that spit at you and kids that would bite at you and, like, draw blood. So, kids are definitely different, but I mean, sometimes I prefer kids… ’cause you can be different, sweet and… I don’t know, some adults are kind of… [laughs]. Yeah…

FP: What’s the weirdest haircut that someone has come in asking for?
JR: Mullets are definitely, sadly, still in. And those are, you know, the short in the front, long in the back. And when guys come in and ask for those, you just kind of want to, like, accidentally buzz up the side. But those are definitely the one cut I find very, very weird, that’s still around. That and the ’80s “poof.” Nothing wrong with the ’80s poof, but it should just die now.

FP: So, how often would you say you change your hairstyle?
JR: Well, now I can’t really change it that much [laughs], it’s so short. Um, I’d say yearly.

FP: Drastically?
JR: I went from shoulder length to this, so, yeah.