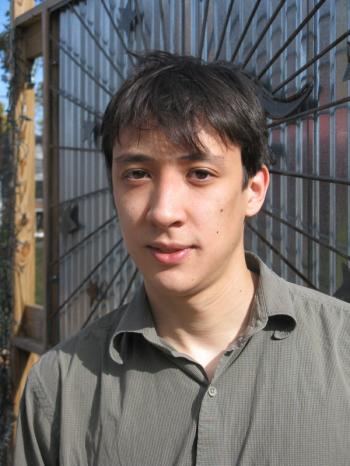 Chuck Griffin describes himself, verbatim, as lacking in ambition, boring and indifferent. Even if he is boring, he certainly finds plenty of interesting and productive ways to use his time: he works two jobs, organizes the chess club at Barrow Elementary School and still has time to work on the occasional side project.

Apart from a summer in New York City, when he worked as an intern in the film industry, Chuck has lived in Athens his entire life. He is open to the idea of relocating one day, but for the present, he recognizes that Athens has everything he needs. He says Athens is his heritage.

Flagpole: Could you explain what you do for a living?

Chuck Griffin: For full-time, I’m a customer service rep at Uberprints [a custom t-shirt printing company], so I look over orders and talk to customers over the phone and help them with the website. My night job – or weekend job – is, I’m a board operator for Cox Radio’s radio stations. There’s like six of them owned in Athens, so I go between six of them and run live events. Usually like UGA sportscasts and stuff.

FP: Do you have any interesting stories from the t-shirt business?

CG: The most interesting thing is that whatever’s going on right now, you’ll see a t-shirt order come in reflecting that. If it’s something in the news, then there will be an order coming in with a t-shirt about it. Like the Penn State case that’s in the news, there are t-shirts about that now, and the Occupy Wall Street protests… You don’t have to watch the news. You can just work there and see what’s going on.

FP: Do you think that there is a philosophy of the t-shirt?

CG: Nowadays, it’s more about inside jokes. People like to put inside jokes on their t-shirts and have other people read them, and it doesn’t matter if they know what it is or not. It’s just… they find it cool to wear.

CG: Yeah. It’s not something I’m into. I don’t wear t-shirts. I don’t think I’ve ever worn letters before – I guess a few times before for work uniforms – but I don’t usually wear, like, design shirts or anything like that.

FP: Could you tell me about your radio work?

CG: Well, usually, it’s me sitting there playing commercials during live events… My job’s basically, if there’s a live event, I’ll communicate with the announcer who’s on site, and I’ll let him know when to come back from commercial.

FP: Do you have a particular interest in radio?

CG: I’ve always loved radio. That’s probably my favorite medium because I used to listen to it as a kid and wait for a good song to come on, and then I’d just record it on a tape. I guess I just like the concept of listening to something – either in your car or somewhere [else] – and somebody else somewhere is listening to the exact same thing. It’s like, a good song comes on, and you only get one chance to hear it. It’s more special.

FP: You said you graduated from UGA two years ago. What did you study?

CG: Telecommunications. I studied kind of that, but it was more like media writing, like writing commercials and writing for TV production. But I took some audio production classes. I chose that major because college was free and I thought it might be interesting, so I kind of just stuck with it. But I’m sure if I had to pay for college, I would probably have went with a math degree or something like that, you know.

FP: Do you have plans for the future, or do see yourself sticking around Athens for awhile?

CG: I guess I’ve been here for [a really long time], so it would be nice to leave and go somewhere else and have a job. But I’m not too set on leaving as soon as possible. It’s more just trying to work and provide and save up some money and see where that takes me.

FP: How long have you been here?

CG: I was born here, and I’ve only been away for three months. I’ve been here all my life. It’s kind of sad but kind of cool, depending.

FP: Do you ever think about moving away?

CG: Yeah. I lived in New York for three months, and I enjoyed that experience. I don’t know if I’d live there, though. I like small towns like this; so, I mean, Athens is fine as far as a place to live long-term.

CG: Ambitious? No. I think if I got some sort of job and was able to move out immediately, I really wouldn’t be too excited because I guess it’s just my personality. I’m kind of boring – indifferent to different stuff. I guess it would be kind of cool, but it wouldn’t make that much difference. I guess the place I live doesn’t make much difference in how I live.

FP: What were you up to in New York?

CG: I had an internship at a talent agency for the film industry. It was mostly for the independent film industry, and I just worked there for three months. It was a summer internship. It was unpaid. I read movie scripts.

FP: Were you ready to come back when the summer was over?

CG: Yeah, yeah. I missed Athens. I get kind of homesick pretty quick. I was even excited about starting school and seeing people.

FP: What kind of film scripts did you get to read while you were there?

CG: Mostly romantic comedies. Mostly, those films are romantic comedies because they’re the cheapest to make… and they can be really awful and still make a lot of money. I read a script about the most base, like, watered-down concepts you can think of, like: Republican falls in love with a Democrat. There was one where this woman’s fiance, she catches him cheating on her, and somehow, she casts a spell on him to turn him into a dog who can talk to her, and she has to carry him around and figure out how to change him back to a human being. It was like a real PG-13 romantic comedy. It wasn’t like a kids’ show or anything.

FP: Do you think you might ever try to write a script?

CG: I mean, I’ve written a few of them. I’ve done some freelance screenwriting, too.

FP: Do you mind if I ask you about your cultural heritage?

CG: Yeah, yeah. I’m half Korean. My mom’s Korean, and my dad’s from Georgia.

FP: Do you feel like having that background makes you different from other Americans?

CG: No. I don’t ever really think about it, I guess. My mom’s pretty westernized… and I guess some people don’t really recognize that I’m Asian. They think I’m Hispanic or something, but that doesn’t really bother me. I don’t ever feel like I have any heritage as far as Korean heritage. I have no knowledge of that culture or anything.

FP: Do you ever wish you did?

CG: No, not really. I mean, I was born here. I have Athens heritage, I guess.