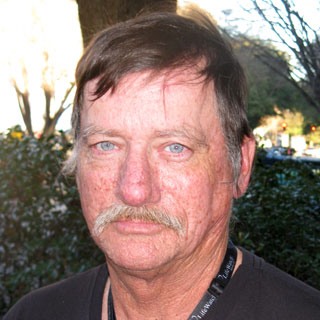 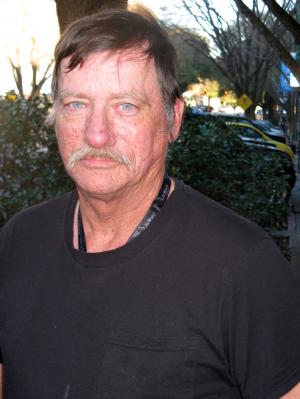 Jerry spends his workday as a security guard outside a downtown bank. While he doesn’t appear to be doing much, Jerry’s job requires constant vigilance: he is always watching for small details. He analyzes the people who come and go to make sure there aren’t any troublemakers going into the bank. He says his work makes him realize just how much people don’t notice about themselves and the world around them. Although Jerry is not allowed to say which company he works for, and he was uncomfortable revealing his last name, he’s a permanent fixture of downtown for the observant eye to find.

Flagpole: What do you do while you’re on the job?

Jerry: I watch people, and I do things to deter crime, especially in this area where I work. What I’m watching is people’s body language, seeing what they’re saying to each other. When they go inside, I kind of scan them over real quick and make sure I can pick up on their attitude and make sure they’re not carrying weapons. You can normally tell when someone’s carrying. The other thing I do is just watch people and see if there’s an attitude or something like that and make sure they don’t go in the bank with it, and if they do, then I have to get the police up here so we can escort them out.

FP: How long have you been a security guard?

J: Ten-and-a-half years… I haven’t been down here [in Athens] for 10 years. I’ve been here about six months, but I’ve been traveling from bank to bank all over the place.

FP: And you’re outside rain or shine?

J: Rain or shine, sleet or snow—if they have us up here in the snow.

FP: It must get quite cold.

J: It does, but I dress accordingly. Like I said, I’ve been doing it for 10 years, so I know how to dress when I come out here. Yes, my face gets a little cold, but you know.

FP: You must enjoy it to have done it for so long.

FP: What did you do before this?

FP: Did you get to travel?

J: I got to travel everywhere. I’ve been all over Europe, Scandinavia, the Middle East, Far East—all at government expense. It was fantastic. I loved every minute of it, and I took every advantage I could to explore the particular country I was in—except for Saudi Arabia and Iraq, when I was in the Persian Gulf War.

FP: What was your favorite experience abroad?

J: Oh, geez. There’s so many of them. Stockholm, Sweden was nice. Japan was fantastic. Germany was pretty good. When you were off, you could go to different places and see different things. Went down to Oktoberfest. That was a blast… We rode on motorcycles down there, and the cops didn’t care because we rode on motorcycles down there knowing that we weren’t going to drink and drive. We took sleeping bags with us, and we put them down beside our motorcycles and went to sleep, and the cops didn’t bother us because they knew they’d rather have us sleep than ride the motorcycles. That was a lot of fun. Japan, like I said, that was fantastic. The people over there, when you get to know them, are really nice, but you’ve got to get away from the base, kind of spread out a little bit. The people are really nice.

FP: Was your time in the military constructive for you? Do you think it contributed to who you are?

J: Yeah, yeah. When I was in the military, I learned a lot of different things. Discipline. How to take orders. How to give orders and just make sure that everybody understood where I was coming from and what they had to do—and just keep it at a level tone and don’t scream and holler, and you’ll get everything done.

FP: How did you wind up working in Athens?

J: When I got back from Iraq, I was still stationed over in Oklahoma, and then, I got out, and I came back to Georgia—I’m born and raised here in [Decatur,] Georgia… I live in Winder—or Auburn, just outside of Winder—and I’ve been here ever since.

FP: Athens is work, then.

J: Athens is work. Now, when I retire, I’ll come down here and just walk as an individual and see how Athens really is.

[Nearby, a photographer takes a picture of an unseasonably dressed young man in brightly colored clothing. The man shouts, “I’m very photogenic, as you can see!”]

FP: You must see a lot of odd things out here.

J: Oh, yes. All kinds of stuff. I’ve seen kids come through here with so many tattoos, so many ear piercings, lip piercings, nose piercings. I’m like, “What happened?” I hear a lot of people complaining, especially some of these younger ones, “Oh, they’ve got so many regulations going on” and stuff like this… So, what they’ve got now, the Internet and all that kind of stuff, that’s good, but when you start getting on there and getting crazy—you know, we didn’t have this when I was growing up. It was either a phone call… And then, the first time you ever got on a computer is when we had a Commodore 64.

FP: Are you glad you don’t sit on a computer all day?

J: I like using a computer, but I’d much rather be out in the fresh air. I was talking to these guys over here. They work upstairs. I said, “Man, I cannot sit at a desk as many hours as y’all do, because I’d fall asleep.”

FP: Do you feel like you’re a part of Athens even though you don’t spend much time here after work?

J: I feel like I’m a part of Athens because I’ve got a lot of people who come here and appreciate me being here. I’ve had a lot of people say, “Boy, am I glad you’re standing out here.” Because they’ll go in there and start doing their thing, and they don’t know what they’re fixing to walk out to, so with me standing out here, they feel a whole lot safer. And another thing I’ve done with college students is, I see them walking out the door, they’ve got their cards out. They’ve got their money out in front of them. And I say, “Excuse me, just for future reference, I just want to give you some advice. When you come out of that bank or go in that bank, make sure you have no money showing.”

FP: Do they appreciate your advice?

J: Yeah. A lot of them say, “I didn’t think about that.” So, you have to turn it on for them… because they’re not thinking.