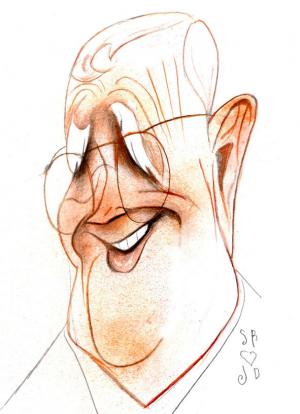 A portrait of Jack Davis by Steve Brodner.

This year’s Jack Davis Distinguished Visiting Artist Lecture, an annual program created to honor Davis’ contributions to popular culture while bringing professional illustrators to campus, is “Game of Thrones: The Political Art of Steve Brodner.” Brodner, one of the foremost visual satirists in the political world today, has contributed illustrations to a lengthy list of major publications, including The New Yorker, Rolling Stone, Esquire, Spy, Playboy, Harper’s and The New York Times. He is also the filmmaker behind several shorts: The Naked Campaign, a series of 28 films covering the 2008 Presidential campaign for The New Yorker‘s website; Need to Know, a commentary feature for PBS and Smashing Crayons for Slate.com. The free lecture begins at 5:30 p.m. in room 151.