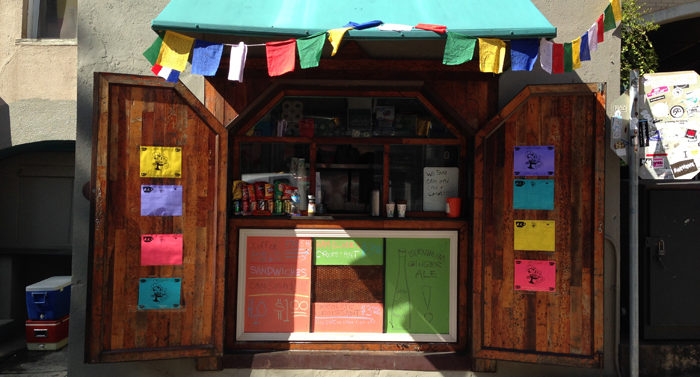 There’s something new in the tiny building attached to the side of Wuxtry that previously housed a branch of Ike & Jane. Ben Goodwin (ex-Helix) opened Ok Café there today (not to be confused with OK Coffee, which once occupied the space), with sammiches, croissants (from The Comerian), coffee and nice sodas (Blenheim Ginger Ale, Coke with real sugar).

At the moment, he’s open 8:30 a.m.-5:30 p.m. Monday through Saturday, but late-night hours Thursday through Saturday are soon to come. Could this get confusing, with A-OK Cafe less than a full block away? No doubt. The new place takes credit cards as well as cash.

The North Carolina-based Cook-Out is open as well, on Epps Bridge near the Wal-Mart, with another location planned for Lexington Road at Gaines School. Reports so far are that it’s very busy, but things are generally moving smoothly, with a two-lane drive-thru.

And, according to the nice dudes at Normal Hardware, The Old Pal, doing craft cocktails in the former Jewels space next door, is open, too.

Mama Bird’s Granola, originally set to open a brick-and-mortar in Hull, has changed its site to the 909 Broad building, just down the hill from downtown. She hopes to open the second week in October.

Athens Power Rankings for the Week of Sept. 30

How the Federal Government Shutdown Could Affect Athens