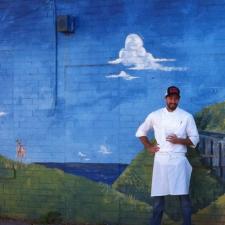 After quite a while in some of the oddest digs in Athens (a tiny, dark space on Jackson Street, hidden away from the rest of downtown’s traffic), Cozy Yum Yum is moving around the corner. Suree Amonteerakul, owner of Cozy Yum Yum, also owned Yummy Bites, which until recently was grilling burgers and such in the space next to the former Bluebird restaurant on East Clayton at Thomas. Bites has gone bye-bye, and Amonteerakul’s original business is moving in, as a big red sign indicates.

Dean Neff, executive chef at Five & Ten, is changing quarters too, but unfortunately he’s not staying in Athens. Chef Neff is heading to Cornucopia, in Cashiers, NC, and Kyle Jacovino, executive sous-chef at Empire State South (Hugh Acheson’s Atlanta outpost) is taking his place. It also looks as though the building permit for Five & Ten’s new location, in the former Hawthorne House on Milledge, has gone through and been posted.