Make a Deposit at the Athens Area Diaper Bank 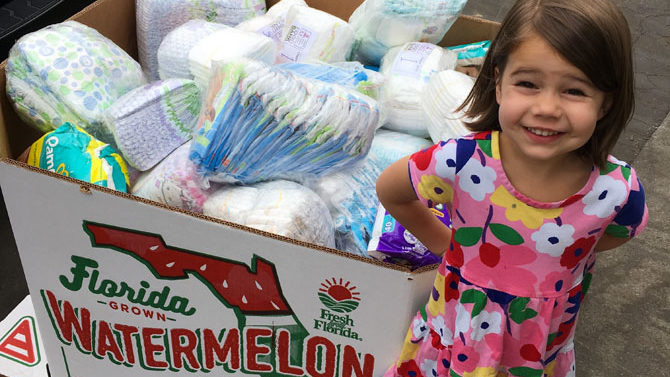 That’s the estimated number of diapers my now-3-year-old likely blew through in his young life. If we’d been able to buy them all in the jumbo-size boxes, the cost for keeping his bum dry adds up to about $2,000—but I know, between last-minute drugstore packs and lesser-quality brands, we’ve probably spent way more.

Diapers are a huge source of stress, especially among low-income parents. Sure, breastfeeding is free. Clothes can be bought secondhand or passed down from friends. But diapers? That’s a serious investment.

A 2013 study found diapers were a leading cause of mental health problems among new moms. In fact, a single mom working a minimum-wage job could easily spend as much as 6 percent of her income on them. Plus, the two main government programs set up to help new moms and their babies, SNAP (food stamps) and WIC, don’t offer assistance for diapers and wipes.

So, what do moms (and dads) do? They “stretch” them—they let them air dry in order to get a second wearing out of them. They change them less often. They begin potty training months earlier than is recommended.

Five years ago, when Erin Campbell first learned about this, she felt devastated. “I was crying, because parenthood is so hard even when you can afford the basic necessities,” she says. “So, I was just putting myself in the shoes of parents who can’t provide these things. It was just soul-crushing for me to think that there are parents that have to deal with that stress.”

Campbell read about the National Diaper Bank Network, which supports local diaper banks across the country in collecting and distributing diapers to new parents in need. There was a diaper bank in Atlanta, but not in Athens. Right away, she knew there was a need that was not being met. The Athens Area Diaper Bank was born.

At first, she paired with the Food Bank of Northeast Georgia, which, as a nonprofit, accepted donations on behalf of the fledgling diaper bank. But last year, she realized she needed to take the organization to the next level and applied for her own nonprofit status. “By the middle of last year, we realized we needed to get even bigger,” she says. “As of a few months ago, we are a completely independent 501(c)(3). We’re still a young organization, but we’ve been dealing with diapers for a while.”

The organization moved from Campbell’s garage to a warehouse space near Georgia Square Mall, and has formed partnerships with eight organizations that work with new moms and dads. Donated diapers are sorted and packaged here, and then they are given to agencies serving new parents in need. Volunteers have distributed more than 92,000 diapers since collections started in 2015. This year, Campbell is hoping to collect 50,000.

The Athens Area Diaper Bank doesn’t give diapers directly to parents—it works with nonprofits to distribute them among clients. Offering the diapers through the agencies helps them build deeper connections with families, she adds, and also helps encourage families to consistently return for additional support and services.

Cloth diapers are also accepted, although Campbell notes they are a little trickier to place with new families. Not everyone has regular access to a washer and dryer, and when a child is in daycare, a cloth diaper may become a barrier, because not all daycares accept them. “It’s hard to find families who are OK with cloth diapers, but when we do, it’s awesome, because they are set through potty training,” she says.

The other benefit in having a local diaper bank is the outlet it offers for parents who have the means to buy diapers—and then end up with extras. If you have a child, it’s inevitable: They go through a growth spurt overnight, and those size 2s suddenly don’t fit anymore. Or, they’ve started potty training, but you still have half a box of diapers stashed away that you know they’re never going to use. Then, it’s the Athens Area Diaper Bank to the rescue.

The diaper bank accepts clean, loose diapers and open packs. “That’s been great for us, because parents have all sorts of leftover diapers,” she says. There are four collection locations in the area: At ReBlossom and Merryn Walker Allstate in Athens, and at Hometown Pediatrics and Pediatric Partners in Watkinsville. Several local daycares and preschools also collect unused diapers from parents, and community members can also hold diaper drives. Some of their best diaper donors are other young parents.

“They understand how expensive they are and how important they are,” Campbell says. “You can’t leave the house without a few diapers in your bag.”

A cell biologist who now stays home to raise her three daughters, Campbell just wants more happy babies in clean diapers, and fewer moms stressing about where they’ll find them. She’s had a lot of support from the local nonprofit community—the Athens Area Diaper Bank is the only one of its kind in town—and now it’s time to spread the word among families who have the money, and the diapers, to donate.

The Athens Area Diaper Bank will host a grand opening from 2–5 p.m. Sunday, May 5 at 485 Huntington Road, Ste. 192. Bring the family for this kid-friendly event, featuring music from Allegro, story time, crafts from Little Athens and Macaroni Kids and more. See how volunteers sort and package donated diapers, and bring some of your own to donate.

For more details, visit athensareadiaperbank.com—and to do your own diaper calculations, visit howmanydiapers.com.