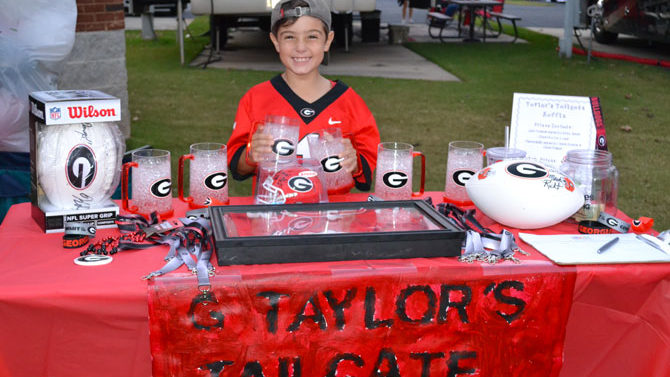 Have you had The Talk with your kids yet? You know, the one where you squeamishly avoid certain buzzwords or obtuse details, just trying to stick with the facts so as to not confuse your kids. And different ages require different levels of details. And let’s be honest, sometimes we don’t even know how to explain things ourselves.

I know, talking about money with kids is difficult. I was startled into this conversation with my own daughter, now 10, in the aftermath of the holiday buying binge we find ourselves in each year. We were discussing the existence of Santa Claus (me: I hate to tell you this, but he’s not real; her: Of course he is!) when I found myself coming at it from the perspective of finance. How does he purchase all those materials? Does he pay his elves? What about things that say “Made in China”—did Santa pay those workers too?

Money, to someone who has no idea what an hourly wage is, can be a very abstract concept. When my daughter sets up a lemonade stand, I try to explain the cost of the materials she’s consuming. When she wants to walk to the corner with her friend and buy a hot chocolate, I try to reinforce that this is a special treat, because $4 a day can add up. So far my efforts are failing miserably, as her “Save,” “Spend” and “Charity” banks all seem to have less money in them than when we started.

But I do know that if you can pair lessons with things kids enjoy—or, at least, embrace in their own worlds—they are more likely to understand the concept. Which is why I was so inspired when I heard about a website called Kids Boost (kidsboost.org). It’s in the vein of a GoFundMe or Kickstarter, but specifically focused on kids and teaching them the value of money—along with helping others and achieving a larger goal.

Created by University of Georgia alumna Kristen Stocks, the site helps empower kids to raise money for a goal. Kids sign up with a list of causes that are important to them, and Kids Boost helps them select one to pursue. The child receives a $100 seed donation, and then Kids Boost works with them to create a game plan for fundraising, such as asking for in-kind donations or setting up an event.

That’s what 8-year-old Taylor Forrester did. After meeting Devon Gales, a Southern University football player who became paralyzed during a UGA game, he decided he wanted to help Gales and his family. Taylor set up a fundraiser on Kids Boost and hosted a tailgate in Gales’ honor near their Gwinnett County home.

The added bonus, says his mother, Sara, is that it’s taught Taylor the work that goes into money—and the good that can be done with it. He’s seen how money can accumulate if you save it, and how that larger sum can make an even bigger impact. “Now I think of it different because when I was littler and I needed money, I would go to the store and buy toys,” says Taylor. “but now I want to save it up.”

His new project isn’t necessarily charitable—he’s saving for a Lego Star Wars Walker—but he’s invested in the new goal because of his Kids Boost project and the relationship he’s since formed with Gales and his family. Forrester says they have set up an account for Taylor at a local bank, and as Taylor’s money jar at home gets heavy with change, he and his father will roll the coins and take it to the bank. When he makes the deposit, he can see how his money has grown.

“We try to find that balance between saving and spending,” his mother adds. “It’s just these everyday life lessons that you hope they remember.”

Just like learning the reality about Santa Claus, understanding the value of money is a lesson that can only benefit you as you grow older.