The Best Shady Spots for Kids to Play 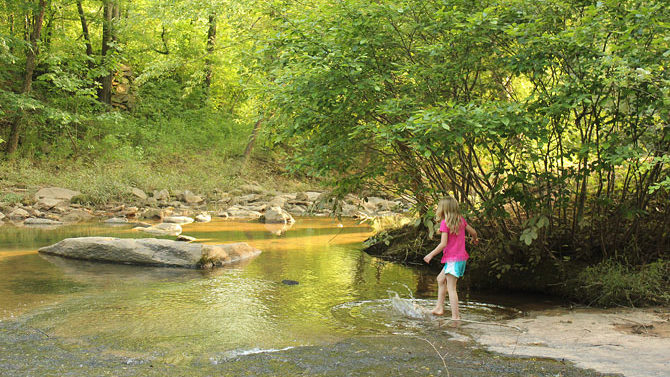 As I write this, it’s been spitting rain and dreary for three days straight, so it seems nearly impossible that sweltering summer temperatures are around the corner. But this happens every year, it seems, and just as we settle into acceptance of our cool-summer fate, the oven gets turned on and we’re baking in humidity.

That’s when I take my daughter and run for cover. After living in Florida for seven years, I’ve grown to dislike the sun. And I’m trying to teach my daughter the benefits of avoiding it as well. Which means that as we plan our outdoor activities this summer, I look for places where we can escape the blasting rays. Now that I’ve spent more than a few summers in town, here are my favorite shady spots.

Playground: I once thought it was a shame that all our playgrounds weren’t covered in a glorious canopy of trees. Then, a massive tree was taken down in the middle of my daughter’s school playground, and I learned that despite its wonderful shade, the tree was about to fall down at any moment. It seems the constant pounding of little feet isn’t very good for a tree’s root system. So, yeah, while it’s nice to play in a spot where you won’t get clobbered by a tree limb, I’m not going to lie—it’s a lot easier, as a parent, to sit on the sidelines and watch when you have a nice shady spot. Which is why I put the Reese and Pope Street park at the top of my playground list. Sure, it’s small, but there’s something about its spongy mat beneath the playscape that’s super inviting, and the giant rope cobweb is fun for climbing. And if you live near downtown, it’s a nice destination after a stroll through the surrounding neighborhoods.

Bike Path: I have two favorite places for biking with kids. For younger ones, a great place to practice is the paved trail at Bishop Park. You can pick it up from alongside the playground and it winds through the park—which is bigger than you think. Granted, there are some portions of the trail that aren’t protected by trees, but it’s easy enough to make a smaller loop in the shady end, if that’s what you’re aiming for. For older kids, head to the North Oconee Greenway. I’d argue this is one of the best aspects of our downtown area, yet it’s horribly publicized, so I’m going to try to do it a tiny bit of justice here. You can haul your bikes there and park at multiple spots along the path, or simply pick it up anywhere along its length if you already live near downtown. The ride to Sandy Creek Nature Center is flat and scenic (we’ve seen deer!), or you can just hang out around the Dudley Park end and enjoy the lush green grass alongside the river.

Hiking: If you already live out in the hinterlands of Clarke County, then you probably have your own favorite hiking path—I mean, it’s already in the woods, which are inherently shady anyway, so this category of shady spots should be a no-brainer. But for those of us who live in more densely populated neighborhoods, we need to work a little harder to find the solace of dappled sunlight. Which is why I’m a big fan of the Birchmore Trail at Memorial Park. It’s just long enough that you get a sense of being in the wilderness, but you’re still in the middle of Athens, which is what makes this trail so special.

Swimming: I have two favorite shady swimming holes, each of them different. For a more official one, stay at Memorial Park for the swimming pool there. It’s an amazing little hole-in-the-wall of a pool, surrounded by shady trees. The pool, like other county-owned swimming pools, opened May 24; its hours are 1-5:30 p.m. Tuesdays-Fridays, noon-5:30 p.m. Saturdays and 1-5:30 p.m. Sundays. Admission is $1 per person, or you can get unlimited summer admission for $20. for a more unofficial place to get your feet wet, head over to Ben Burton Park and play in the stream near its entrance. Yes, I know it has a lot of road runoff in its waters, and it is probably not the most sanitary of spots, but c’mon—live a little! Besides, my daughter spent a decent amount of time there two summers ago, sliding on rocks and wading in its deeper (knee-high) spots, and she hasn’t grown a third head. Heck, it’s summer—trust me: When it’s late July and you’ve exhausted your air-conditioned options, you’ll be grateful for any sort of cool, shady respite you can find.