Schools Get in on the Gardening Craze 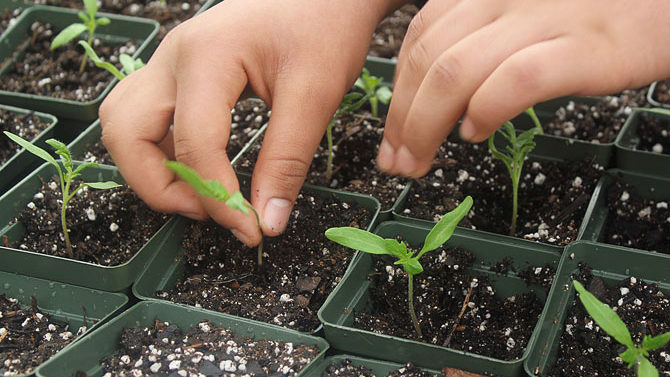 A pediatrician once told me that he looks for skinned, bruised knees not because there might be trouble in the home, but because it’s a sign the child is getting outside and playing. I agree with the sentiment, but for me, the signature look of a child who is getting fresh air is dirty fingernails.

It’s a tricky thing to get your children interested in working in the garden. That said, if you leave them to their own devices in the backyard, they’ll inevitably dig something up, so you might as well focus that energy on something you can later eat or put in a vase.

This is how I met 12-year-old Jorge Pascal. The seventh-grader takes agriculture classes at Hilsman Middle School, and while he’s cool with the chickens and the blueberry bushes, his eyes light up when he talks about tomatoes.

Wait. Back up. Did I say chickens? Yup. Turns out Hilsman has two little “chicken tractors,” which are pens that you can move around a yard. One student will be testing the soil under the chickens as part of a project to see how the chickens may help it. The school also has two greenhouses, three dozen raised beds for gardens and an orchard with blueberries, muscadines, figs, plums, apples, pears and pecans. The idea, says Pam Stratton, agriculture teacher at the school, is to introduce students to various aspects of agriculture, giving them practical applications for the math and science lessons they get in other classes.

But I digress. Jorge says he keeps a garden at home, too, and is the proudest of his tomatoes. The class has been transplanting seedlings into larger pots, and over the summer teachers will keep the crops watered. Last year, Stratton says, she took extra produce to the homes of kids who worked extra hard in the garden during the school year.

Don’t think Hilsman is unique. In fact, every single school in Clarke County has some kind of agricultural component going on, whether it’s raised-bed vegetable gardens at the elementary schools or greenhouses and orchards for the older kids. Thanks to a recent grant secured by the Athens Land Trust, which solidified the Community Garden Network, there is now continuity and communication between the various garden programs at the schools, says Stacy Smith, program assistant at Keep Athens Clarke County Beautiful and chair of the school garden committee for the Community Garden Network. While gardening at schools isn’t a new thing, for a while it was a patchwork of infrastructure.

“People would come in and out of the schools; gardens would pop up, get used, then disused,” Smith says. “So really, the angle we’re trying to work here is more sustainability—keeping a record of the garden, getting resources to them, trying to engage more people in trying to take care of the garden.”

Students at the University of Georgia are a big part of this, too. Matt Tyler, a junior political science major from Atlanta, has been working to get more volunteers for the after-school gardening programs at Gaines School Road and Chase Street elementary schools. Tyler also helped secure a $2,900 grant from the Office of Sustainability at UGA for Junior Master Gardener lesson plans and other educational materials for the raised bed gardens there.

For Tyler, the work is about educating kids about the natural world. And as he gets the word out about volunteering at the schools, he’s finding that there are a lot of students with a similar passion.

“The main aspect is not only gardening but an academic portion, to make sure the students are getting more out of it,” he says. “We’re really trying to focus on volunteer development and a lot of meaning for the kids in the project.”

But what’s the benefit to getting your hands dirty if you’re a kid? Smith feels part of it is simply about getting outside and seeing where their food comes from. It also gives kids a chance to learn from something that’s not in a workbook. And from a school nutrition aspect, it’s important because “students who grow their own food are more likely to try new things,” Smith adds.

Kids are fickle. One day they will be your best helper, and the next day they won’t want anything to do with you. But, they also can’t resist being outside. And you can start small—some flowers they water, or their own little plot in a vegetable garden, for example.