From Its Dumb Coach to Atlanta Traffic, Here Is Why We Hate Georgia Tech 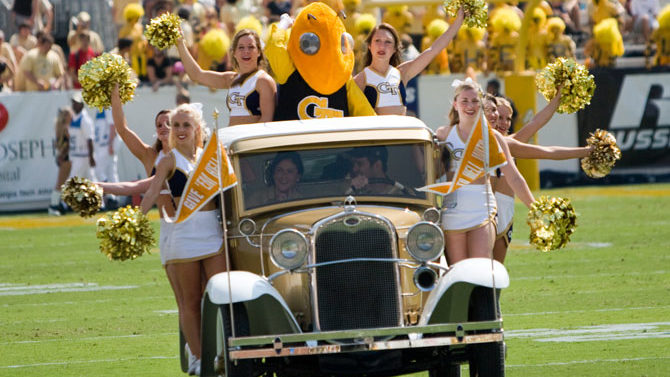 Tech is for nerds: Set aside that fact that we basically live in a monoculture in which everyone consumes the same Marvel movies, TV remakes, SoundCloud rappers and Twitch streamers, or the fact that there are no real sociological differences between two alumni bases made up mostly of white people from the Atlanta suburbs, and the only real thing that separates us is 70 miles of traffic. Tech is for FREAKIN’ NERDS! They have computers, protractors and all other sorts of nerdery, while we… also have those things, BUT we have a law school, too. Take that, nerds!

Atlanta traffic is the worst: I have spent far more time sitting in my car on I-85 outside Bobby Dodd Stadium than I ever did inside it, and, honestly, I’m thankful for that. Athens may not have quite as much stuff as Atlanta, but at least you don’t have to drive 30 minutes to get anywhere. I mean, what’s even the point of living in a city if you can’t walk places?

The bee mascot Is dumb: I don’t know the name of Tech’s bee mascot—nor do I care enough to take the three seconds to open another tab and find out—but it is dumb as hell. They don’t even have a live mascot, just a dude in a suit. Our mascot is a living (for now), breathing (albeit very strained breathing) majestic beast. I’ll have more respect for Tech when they keep a beehive on the sidelines.

The triple option is stupid: Leave it to a bunch of nerds to overthink everything and run some obscure offense that almost no respectable college football team runs in an effort to engineer—see what I did there—a competent ground game and literally nothing else. Georgia’s philosophy on running is a bit simpler: RUN THE DAMN BALL. So far, that’s worked out pretty well for us. Tech may lead the nation in rushing (353.7 yards per game), but Georgia isn’t far behind, ranking 10th nationally (252.4). We also gain more yards per carry than Tech, 6.2 to 5.9. We can also pass if we want, and I don’t think Tech’s thrown the ball since Reggie Ball let one sail out of bounds on fourth down.

Paul Johnson is awful: Before anyone starts in on me, I’ll cut you off at the pass. Yes, Johnson has won four division titles and one ACC title (since vacated), but he did it in the ACC Coastal. That’s like bragging about beating a bunch of 4-year-olds in a Royal Rumble. The fact that he doesn’t have more titles in that train wreck of a division would infuriate any fanbase worth its salt, but Tech fans know their lot in life. I mean, we fired Mark Richt, the best coach in modern UGA history, because he couldn’t get the job done in a similarly weak division. He still beat the hell out of Tech for a solid decade, though, and Kirby Smart is set to do the same. If Tech fans had any self-respect, they would have tossed Johnson to the curb the season he finished 3–9.

UGA runs the state: Just look at the record, mon frère. We may have traded blows with Tech over the last few seasons, but Georgia holds the overall series advantage 66–41–5. But running the state goes beyond the football field. For all intents and purposes, it’s UGA grads running Georgia’s government. Governor-elect and champion of voter suppression Brian Kemp is a Dawg, as are our human slug of a president’s agriculture secretary, Sonny Perdue, mutant lobbyist Ralph Reed and plenty of vampires and soulless cretins from the Georgia GOP cesspool elected on a local and state level.

You know what? On second thought, let’s try to forget about that last part. Go Dawgs. Wreck Tech.