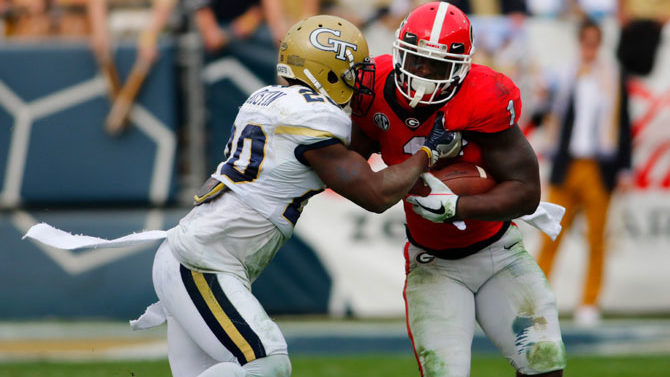 As a Georgia fan, there are few things finer than beating the hell out of Georgia Tech, which is exactly what the Bulldogs did Saturday in Atlanta. The Dawgs mollywhopped the Jackets 38-7 and exacted some revenge for the loss to Tech last season at Sanford Stadium.

The game with the Techies was supposed to be the last stop on Georgia’s 2017 Revenge Tour, which has rolled along without a hitch. First up was some payback against Tennessee, which beat us with a Hail Mary in 2016. We got them back with a 41-0 shutout. Then came Vanderbilt, which squeaked by us thanks to some poor coaching decisions. We beat them 45-14. Florida, which had beaten Georgia three years in a row, was next. We beat them 42-7, badly enough that the Gators fired their coach. Finally, we faced Tech, which stormed back in last year’s game. We emptied their fans from Bobby Dodd Stadium by the fourth quarter.

This season hasn’t just been about Kirby Smart and his team proving they are much better than they showed in Year One. They also want to prove the losses in his first year at the helm were flukes and not happening again any time soon. That stuff you pulled last year doesn’t fly anymore, they’re telling opponents—we’re one of the best teams you’ll face every year now. Savor 2016, because it might be your last win against us for quite a while. In short, the results against teams that beat us last season sent a message loud and clear: Don’t poke the bear.

But this Revenge Tour isn’t over yet. Thanks to Auburn’s win over Alabama in the Iron Bowl, it gets a final stop at the SEC Championship Game in Atlanta, where the Dawgs will face the Tigers for the SEC title, a spot in the College Football Playoff and a shot at the national title.

You probably remember the loss to Auburn, considering that, unlike the other teams we faced on the tour, Auburn beat us just a few weeks ago, not last season. The Tigers embarrassed us with a lopsided 40-17 win at Jordan-Hare that threw a major wrench into our CFP plans. (We would essentially have a spot locked in the CFP, regardless of the SECCG result, if we had beat Auburn.) After the game, Auburn coach Gus Malzahn was caught on camera saying  they “beat the dog crap” out of us, and I can’t disagree with his assessment.

There is no doubt Auburn was the better team on the Plains and deserved to beat us, but that doesn’t mean we don’t have a great shot to beat them in Atlanta. For starters, they won’t have a home crowd advantage. The crowd in Atlanta should be split pretty evenly, but there should be more red and black than blue and orange in the crowd. There’s also the possibility that Auburn comes in overconfident. Since they beat us so badly the first time, they might think the second will be a walk in the park as well. And star running back Kerryon Johnson was injured in the Iron Bowl.

But Georgia plays its best when it has something to prove, and it has a lot to prove in Atlanta. With one win, it can prove that the loss to Auburn was a fluke, that it’s the best team in the SEC, and that it deserves a chance to compete for a national title. This game should be a whole lot closer than 40-17.

The rematch with the Tigers is the kind of opportunity fans dream of but doesn’t come along often in college football. Most of the time when you lose in college football, you have to wait a year to exact revenge, like we had to do against Tennessee, Vanderbilt, Florida and Tech. But we don’t have to stew on that loss in Auburn anymore. We have a chance to not just get revenge, but to wipe that loss completely from our memories and replace it with a win that gets us into the CFP and keeps Auburn out of it.

Be warned, Auburn fans. Tennessee, Vandy, Florida and Tech fans can tell you firsthand that vengeance always comes. And it’s coming for you sooner than expected.

The Treehouse Market Is Open in the Falls of Oconee