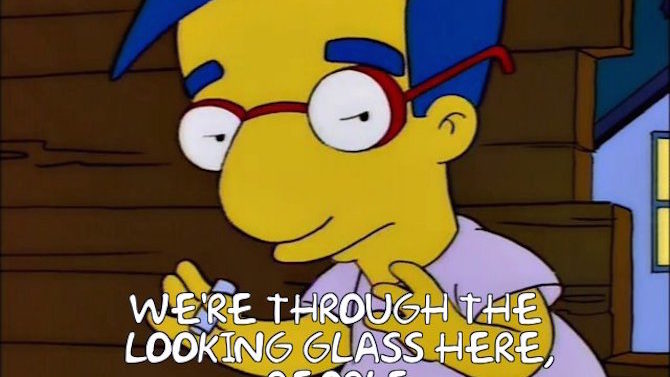 To quote legendary Georgia defensive coordinator Erk Russell, “Screw Florida and the mule they came in here on.”

To quote myself watching Georgia bludgeon Florida in front of a half-empty stadium (the Gator half) at the World’s Largest Outdoor Cocktail Party, “Ahahahahhahahahahahahahahahahaha!”

The Bulldogs went down to Jacksonville and laid a historic beatdown on the Gators, 42-7. It’s Georgia’s most decisive Cocktail Party win since 1982 when, as you might remember, it went on to play Penn State in the Sugar Bowl for a national championship.

All week—hell, all season—fans pointed to the Cocktail Party game as the barometer for these Bulldogs. As the season progressed and the Dawgs kept winning games, confidence grew that this Georgia team is better and more ready to compete for a title, both SEC and national, than any of its predecessors for the last few decades. But the specter of Florida and all the pain it has inflicted upon Georgia over the years hung around like a stale fart. Anyone with eyes good enough to watch a game or read a stat sheet could see Georgia is the superior team, but that didn’t stop some part of our lizard brains from convincing us Florida holds some preternatural advantage.

Heading into this weekend, Florida was 7-1 when facing Georgia teams ranked in the top 10. We all remember the upsets in the series: 2002, 2003, 2005, 2014. Losses that ruin a promising season, like those, linger and put a pain in your gut. Then your gut convinces your brain that those disappointments will always be the outcome.

Our eyes saw Georgia run up a 21-point lead in the first quarter. It took a little less than eight minutes of game time for the Bulldogs to score three touchdowns. By the time the second one was on the board, there was little doubt over where the game was headed. It was just a matter of getting there.

The Georgia offense was ruthless in the win, and didn’t need to hold the ball long to score. Sony Michel got just six carries, but he ran for 137 yards and two touchdowns on them. The Bulldogs ran 42 plays in the game, 35 on the ground. Like we’ve done so many times this season, we ground-and-pounded our way to a win. Florida knew what we were going to do, it just couldn’t stop us.

Our eyes saw the defense almost pull off something no team has done against Florida since the ‘80s. Florida had scored in 367 consecutive games coming into the Cocktail Party, the longest scoring streak in FBS history. That was almost snapped by a ferocious Georgia defense, which created the early lead by getting a couple three-and-outs and an interception early in the first. The Gators eventually scored in garbage time when Georgia played its reserves.

It was a brilliant display by the defense, but also one of their worst of the season. Florida gained 183 yards on the ground, the most of any opponent this season. That should tell you just how good this unit is.

Our eyes saw the empty stands on the Florida side of EverBank Field. I didn’t hear a single Gator fan running his mouth before the game, probably because they were well aware of the beating that was about to befall them. By the end of the game, the Florida fans who bothered to show up for their team’s funeral had turned tail and run. EverBank field was a sea of red. The only blue in sight was the empty seats left by fleeing Gator fans.

Between Georgia’s ascension under Kirby Smart this year and the turmoil Florida finds itself in under Jim McElwain—who could be fired by the time you read this—it’s never been clearer these two programs are moving in different directions. And for once, it’s Georgia that’s moving up instead of down. Florida may not make a bowl game. Georgia may play for the national title. Games like the one Saturday may be the new normal in the Cocktail Party.

Our eyes have seen Georgia dominate almost every game this season, and there’s no reason to think that’ll change in the next four games. To quote myself once again. “Things are different now.”