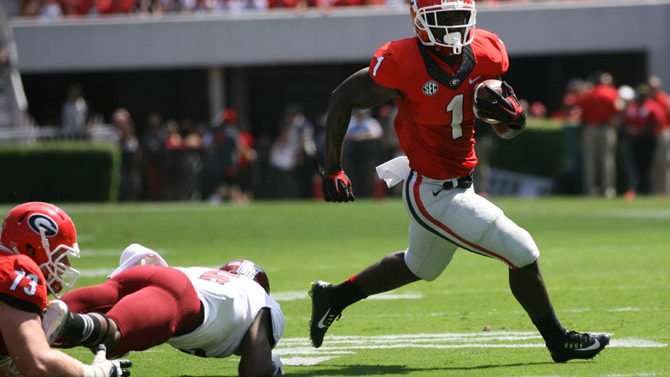 I think we can agree that 2016 was pretty much a garbage year in almost all respects, including Georgia football. In Kirby Smart’s first season, the Bulldogs went 7-5 with losses to rivals Florida and Georgia Tech, an upset at the hands of Vanderbilt and a crushing defeat by Tennessee on a Josh Dobbs Hail Mary.

But UGA has one more chance this season to claw back some respectability. Georgia plays 6-6 Texas Christian University in the Liberty Bowl on Friday, Dec. 30 in Memphis. No, it isn’t the marquee matchup in a glamorous bowl game many Bulldog fans hoped for. It is, however, a battle between two evenly matched teams with more talent than their records indicate. This isn’t a dream game, but it’ll be fun to watch.

The new year doesn’t begin until after UGA’s bowl game. But with the news that tailbacks Nick Chubb and Sony Michel and star linebackers Lorenzo Carter and Davin Bellamy are staying for their senior seasons, on top of Smart dominating the other SEC East schools on the recruiting trail, it already feels like a new era has begun. Here are a few early resolutions I want to see UGA accomplish in the Liberty Bowl.

Ascendent Eason: It seems like freshman quarterback Jacob Eason has been on the cusp of taking it to the next level all season. His potential is evident when you see him on the field. But he does have flaws that need correcting. He needs to throw the ball with more touch, especially on short passes, and he needs to have better vision when looking downfield.

More than likely, if he is going to erase these flaws by next year, it will happen with continued training over the offseason. Having a month to focus on an opponent can bring out a lot of good in a player, though. I’m not looking for a perfect, dominant performance against TCU. But he has it within him to to throw for 250-plus yards and two or more touchdowns with no interceptions at a 70 percent completion rate. That’s still a pretty tall task, but if Eason does it, Georgia will win and turn a few heads in the process.

Chubb and Michel Get a Head Start: There was no better Christmas present for Georgia fans than the news that this dynamic duo of tailbacks will be back for another year. Neither man met the 1,000-yard mark this season, but we know how much talent each has. And they decided to come back to show more of that talent to NFL scouts.

A good way to get an early jump on next season would be to have a big game in the Liberty Bowl. Although it has a handful of really good linebackers and defensive linemen, TCU’s run defense is average at best. I think motivation is a big factor in who wins and loses bowl games, and Chubb and Michel will be motivated to show that their performance this season isn’t indicative of their skill level. The only question is whether or not the offensive line will give them big enough holes to run through. As motivated as the two will be, it doesn’t mean much if the hogmollies up front aren’t blocking.

Hardman Lives Up to the Hype: Five-star recruit Mecole Hardman was one of the headliners of Georgia’s 2016 freshman class. But in his first season in Athens, he had to transition to defensive back, a position he didn’t play often in his high school days. That transition has been a bit tougher than expected, and it’s been difficult to find playing time this season.

That will change in the Liberty Bowl, out of necessity. A slew of Georgia’s second-string defensive backs are leaving the program and won’t be playing in the bowl game. That leaves Hardman as the only player left to pick up some of that slack. The game could be a confidence booster for him. Kenny Hill—aka Kenny Trill, formerly of Texas A&M—has been garbage this season, throwing 15 touchdowns to 13 interceptions. With TCU’s quarterback being so inaccurate, Hardman may just need to be in the right place at the right time to get an interception that would give him momentum heading into the offseason.