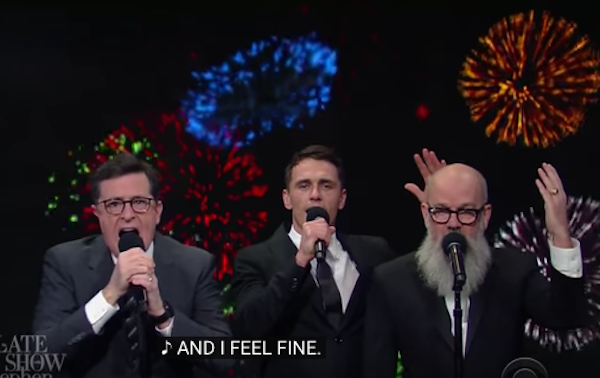 On last night’s “The Late Show,” Michael Stipe joined host Stephen Colbert for a rendition of the R.E.M. classic “It’s the End of the World as We Know It (And I Feel Fine).” Sort of, anyway.

While 2016 may have seemed like the end of the world, Colbert changed the lyrics to “It’s the End of the Year as We Know It,” rattling off a list of 2016’s notable (and mostly depressing) happenings, from Putin’s election hack to Harambe, as a disgusted-looking Stipe—still sporting his Santa Claus beard—looks on.

Stipe finally jumps in, then James Franco shows up for some reason. Happy new year!