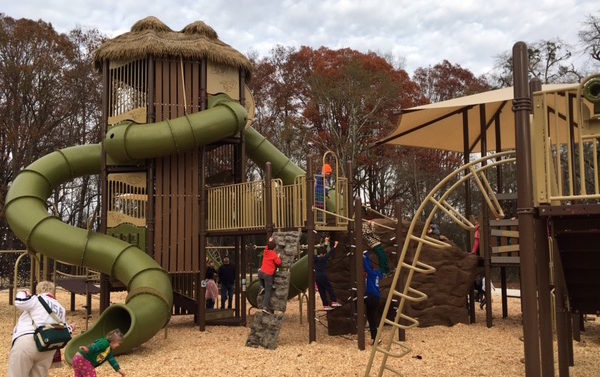 Athens-Clarke County officials and scores of parents and children braved frigid weather Friday to celebrate the re-opening of the all-new World of Wonder playground at Southeast Clarke Park.

The 2.5 acre playground is a replacement for the original World of Wonder, Athens’ first “destination playground,” which drew people not only from all over the county, but the region as well.

“This park has been a jewel in our park system, something we’re very proud of,” said interim ACC Leisure Services Director Kent Kilpatrick, who’s been around since ground was broken on Southeast Clarke Park in 1997.

The original playground was a massive community-wide undertaking built with volunteer labor, and it proved too popular for its own good. A decade after opening, it was starting to fall apart and become dangerous.

“It has been loved to death,” Kilpatrick said.

Leisure Services spent $600,000 in SPLOST 2011 sales-tax funding earmarked for parks on the project, which also included relocating and expanding the overused Wiggly Field dog park. The new WoW playground is built on the site of the old dog park.

In addition to the usual slides and swings, the playground includes a roller slide, a contraption that’s a cross between a jungle gym and a merry-go-round, a “trike loop” and a three-story-tall slide that’s sturdy enough to support grownup kids, too.

“I hope y’all enjoy that,” Mayor Nancy Denson said. “I don’t think I’d have the guts to get on it.”