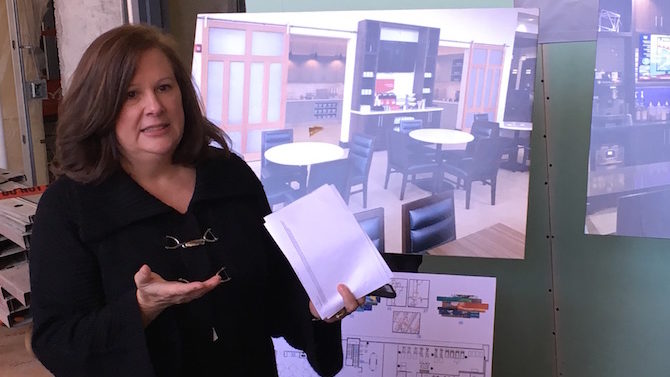 Don’t book your room just yet, but the new hotel next door to the Classic Center reached a milestone today, as local tourism officials and event organizers from across the Southeast gathered to celebrate the Hyatt Place’s “topping out.”

The nine-story, 200-room hotel’s structural elements are now in place, although it won’t officially open until late May or June.

Hyatt Place guests will spend $13.5 million per year, creating a $20 million economic impact, according to Mayor Nancy Denson. Seven hundred people are employed in its constrution, and the hotel will employ 75 people permanently, Denson said.

Along with other downtown hotel projects—a SpringHill Suites next door to the Holiday Inn and a Homewood Suites at The Mark, a student-housing development under construction on Oconee Street—the Hyatt Place will bring the number of hotel rooms downtown to 1,360, with another 385 rooms under construction in other parts of the city, according to Athens Convention and Visitors Bureau Executive Director Chuck Jones.

Hospitality—which includes tourism, conventions and trade shows—is a $280 million industry in Athens that employs 2,600 people, according to the CVB. But many meeting planners specifically ask if a hotel is connected to the Classic Center, Jones said, and tourism officials say Athens has been losing larger conventions because the city lacks enough hotel rooms nearby.

One of those is the Georgia Health Occupation Students of America, whose annual convention draws 4,000 people.

“Unfortunately, the hotel space wasn’t available, so we had to leave” for Atlanta, executive director Allen Seigler said. But the group is now considering coming back to Athens, he said.

Efforts to build a hotel that connect to the Classic Center date back almost 15 years. The convention center’s executive director, Paul Cramer, once sought to build a hotel with public tax dollars, but county officials nixed the plan when the Hilton Garden Inn came up across the street.

“I’ve been looking forward to a hotel adjacent to the Classic Center since my first few months as mayor,” Denson said at the topping-out ceremony. “I think Robert Small [the development team’s local representative] was one of my first meetings.”

Although the hotel is being built with purely private money, it’s been something of a public-private partnership. Athens-Clarke County swapped land with Small in 2011, after including the Classic Center expansion in a sales-tax package, allowing the hotel to be built on frontage along Thomas Street.

The hotel’s developers also bought and demolished the Square One Fish Co. building next door to make way for the hotel.

The Hyatt’s developers originally asked for tax breaks in 2014, but opted to build it without them.

Hotels are also a revenue generator for the local government and schools. In addition to property taxes on the hotel itself, guests pay 7 percent in sales tax, a $5-per-room fee that funds transportation projects and another 7 percent hotel/motel tax that raises more than $2 million annually, with most of the revenue going to the Classic Center and the CVB.

Americus-based Southern Hospitality Group will manage the property and has hired Angela Smith as general manager.

This post has been updated to correct errors on the hotel’s ownership and economic impact.