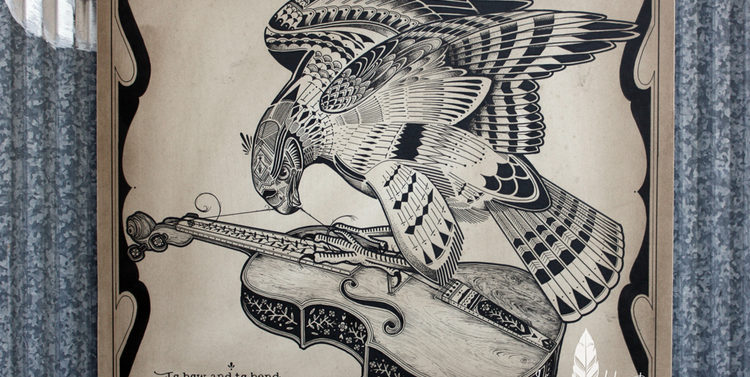 Back in October, AthFest Educates announced its plan to commission a large-scale public mural to commemorate the 20th anniversary of the AthFest Music and Arts Festival. Proposals were sought from three separate collaborators: a youth-serving organization interested in producing the mural as part of a multi-month arts program; a professional artist to create a design and oversee the youth as they participate in painting the mural; and a local business property owner willing to donate a highly visible outdoor wall as the site of the mural.

This afternoon, the nonprofit announced that artist David Hale has been selected to partner with the Lyndon House Arts Center staff, who will facilitate the youth art program. Hale, who owns and operates Love Hawk Studio out of the Chase Street Warehouses, is a local illustrator and tattoo artist internationally recognized for his designs. His artwork is immediately identifiable through its mesmerizing geometric detail and clear reverence for the natural world, often starring woodland creatures like owls, foxes, bears and deer. Hale served as the theme artist of AthFest in 2013, creating imagery for the festival’s signage, T-shirts and compilation album.

The mural project will be overseen by Hale and three high-school-aged student interns, who will guide children in painting the design through Saturday, after-school and summer programs. The Lyndon House will set aside a space for painting throughout the month of June.

Philanthropy, a Franklin, TN-based fashion boutique that donates 10 percent of all sales to various charities, has offered their east-facing wall as the mural’s site. Located downtown at 294 W. Washington St., the building was once adorned with a different commissioned mural by Hale, but the then-peeling, graffiti-marred mural was removed after Sunshine Cycles relocated to Baxter Street and Philanthropy moved in during the summer of 2014.

Shared in an AthFest press release, Didi Dunphy, program director for the Lyndon House said she, “is so very pleased to have been selected as the youth organization partner in this celebration of 20 years and all that AthFest has contributed to our town. Our youth will be working on the mural with a professional working artist. This shared experience—the learning from and hearing stories directly from working artists—provides an inspirational and invaluable experience for them.”

Reflecting AthFest Educates’ commitment to advancing music and arts education for youth as well as the festival’s role in strengthening the Athens music scene, the mural will showcase local artistic talent while beautifying downtown. The organization plans to invest up to $20,000 towards the mural’s implementation. A dedication ceremony will be held during AthFest, set for June 24–26 this summer.