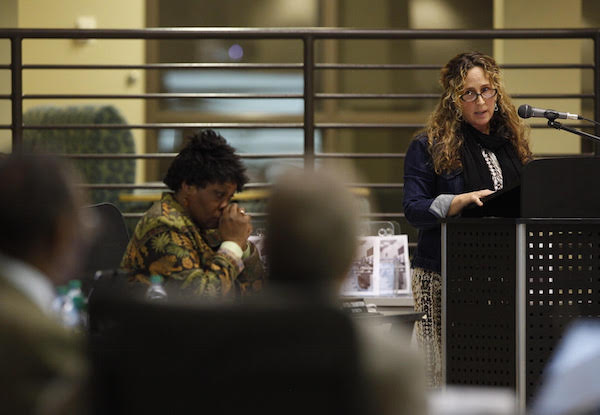 Patti Huberty (right) speaks to the Clarke County Board of Education as board member Ovita Thornton looks on.

Parents and teachers criticized a “culture of silence,” as one speaker put it, in the Clarke County School District in the wake of an alleged sexual assault at Cedar Shoals High School Jan. 7 that went unreported for four weeks.

Several speakers at the Board of Education’s regularly scheduled meeting tonight called on the district to hold a public forum to answer questions and give a full accounting of why no one informed students, teachers or the public of the allegations until after the Athens Banner-Herald broke the story Feb. 4.

More broadly, speakers condemned what they perceived as administrators’ tendency to focus on the positive while ignoring the negative.

“It is time to break the culture of silence in this district,” former CCSD teacher Karen Sweeney Gerow said.

This culture and a lack of discipline in classrooms has led to an exodus of teachers, as well as parents after their children rise above the elementary-school level, parent Shannon York said.

“Talk to us, and not just about the good stuff,” York said. “We have to know what’s bad and ugly.”

Cedar Shoals graduate Foster Daniel told his own story about violence and administrators’ stonewalling. He said his daughter transferred away from his alma mater after another student broke his daughter’s hand.

“I had to move her to another school district because she was afraid to go in that building,” Daniel said.

No one ever told him exactly what happened, he said, although he believes the incident was caught on video.

“I haven’t gotten anything from anybody,” he said. “A lot’s been said, but nothing’s been done.”

Not much was said tonight, though—at least not by school board members or administrators.

“I really appreciate your comments and concerns,” said BOE President Charles Worthy, a retired principal. “We’re all concerned. This is a very, very, very serious matter.”

Superintendent Phil Lanoue—who will take over as Fulton County’s school superintendent May 1—missed the meeting because he’s in Phoenix for the National Superintendent of the Year ceremony. He won the award in 2015.

Assistant Superintendent Ted Gilbert read a prepared statement on Lanoue’s behalf that acknowledged the accused students should have been disciplined earlier in spite of an ongoing police investigation, outlined new security measures at Cedar Shoals and promised full transparency.

The aftermath was mishandled in more ways than one, according to Cedar Shoals teacher Patti Huberty. She told the board that, when they were finally officially  informed on Tuesday, many students sided with the three students who were arrested over the 15-year-old victim, whom police say was held down by two classmates while a third raped her, with the attack caught on tape by a security camera.

“What you may not be aware of is the backlash from the students,” Huberty told the board. “Many students voiced the opinion that the victim was to blame” because the accused were remained in school while the victim withdrew from classes, she said.

Jennifer Denson of Athens for Everyone’s sexual assault prevention campaign applauded the district for instituting the FLASH sexuality curriculum but said more needs to be done to prevent victim-shaming and harassment.

Mattee Barkdoll congratulated the victim on her courage for reporting the assault to authorities. The silence that followed must have made the ordeal even harder to endure, she said.

“I want you to know that we didn’t know,” Barkdoll said to the victim, wherever she is. “The Athens community didn’t know.”