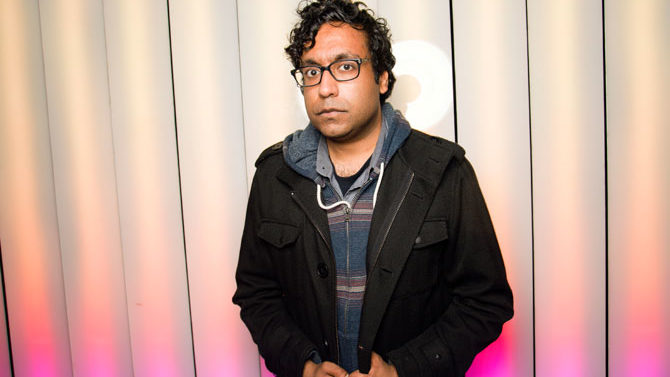 Comedian Hari Kondabolu isn’t afraid to speak his mind. Known for his biting material on race, politics and pop culture, Kondabolu’s mission is to get people to confront their own ignorance and biases while making them laugh at the same time. Kondabolu got his start as a writer-reporter on W. Kamau Bell’s forward-thinking weekly show “Totally Biased.” Since then, he’s become known as the star and writer of The Problem With Apu, a documentary that confronts the inherent racism surrounding popular “Simpsons” character Apu Nahasapeemapetilon. The film, which highlights the fact that Apu is an Indian-American character voiced by a white man (Hank Azaria) doing an offensive accent, stirred up a lot of discussion and controversy, and ultimately resulted in Apu being removed from “The Simpsons” altogether.

Ahead of his Athens show, Flagpole talked to Kondabolu about his lifelong “Simpsons” fandom, the public reaction to the documentary, his standup career and what he plans to do next.

Flagpole: What was it like getting backlash from hardcore “Simpsons” fans after the release of The Problem with Apu?

Hari Kondabolu: It’s heartbreaking for a lot of different reasons. First off, as a “Simpsons” fan, it’s hard to remain a fan. I think there’s an illusion that I’ve always had of “Simpsons” fans being a little smarter and more thoughtful, because the comedy of the show can be that way. You’re not just watching it because it’s a cartoon—it’s a brilliant cartoon. There’s so much commentary, incredible references, the writing is excellent—with a few exceptions, which is kind of what the film is about.

Apu is not the most clever character. I think they’ve turned Apu into a brilliant character over time, but he comes from a basic stereotype. It frustrates me that people can say so many horrible things and threaten to kill me over this. It’s from all over the world now—it’s this global hate from people who haven’t even seen the documentary. I don’t even suggest getting rid of the character. I just ask, “What do we do with this?”

FP: Overall, are you still happy that you made the documentary?

HK: I think so. I mean… when someone’s threatening to kill you, you’re like, “Is this worth it? Do I want to be a martyr over a fucking cartoon?” At the end of the day, if I didn’t think I was right—if I had any doubt—it’d be a different story.

I love “The Simpsons.” Even when Apu was at his worst early on, it was just something you tolerated, because the show was so good. I don’t want to deny myself the show because other people are putting their own problems into how they view the character. Like I said in the documentary, “Thank you, come again” became the catchphrase, but the character is more interesting than that catchphrase.

FP: It’s disappointing how the show ended up handling your criticism by completely removing Apu and having Lisa crack lame jokes about it.

HK: Yeah. That was not what I wanted. I never thought I’d see the show argue against political correctness out of Lisa’s mouth. I think she would agree with me.

FP: Where are you aiming for next in your career?

HK: I think, like a lot of comics, I want my own vehicle to create a bigger vision. Like a TV show, if you can even call them that anymore. I want to be the lead on something shown through a screen. I’m ready for that. I’ve been ready for that. I’ve been on TV before—I’ve had a pilot that unfortunately didn’t go through. I know how to work with other people, and I have stories to tell. I think there’s enough outlets now that I can find an audience.

FP: We’re definitely in uncharted territory when it comes to the balance between mainstream media and representation.

HK: That’s why I find the criticisms like, “We can’t say anything anymore—free speech is being restricted” funny. Free speech has never been this open. You have more people being able to talk publicly about their experiences than ever before. These are new people telling new stories… Like when people criticized my documentary for “trying to take away free speech.” I used free speech—how on Earth am I trying to limit it? I’m allowed to tell you I don’t like something. Where do you think I learned to criticize pop culture? “The Simpsons.” I’m just doing what I was taught.

HK: I’m excited, man. I know a lot of comics come through Athens, and they always say you’d be doing yourself a disservice by playing Atlanta and just moving on. I have a good sense that Athens will feel like home.