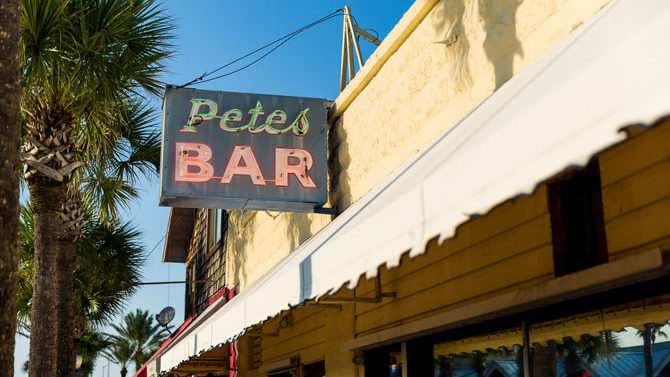 Neptune Beach is old Florida. Pete’s Bar was the first tavern in Duval County to receive a liquor license after prohibition and has been run by the same family for 80 years. The lights are low, which turns the cigarette smoke into a fog that will stick around even after the city outlaws smoking in bars. The bartenders pour with a heavy hand, and the older clientele are quick to challenge you to a game of pool – a game costs a quarter, although bumper pool is 50 cents.

Once you have the need for fresh air, cross the street and have a drink overlooking the ocean at Lemon Bar, which neighbors the Seahorse Inn’s pool deck. “This looks like a hotel I used to bust drug deals at,” a former FBI agent told me about the Seahorse. But the low roar of close waves, pinch of salt in the air and rum served in plastic cups warm up the atmosphere.

Heading south, Jacksonville Beach is home to a beachside public park and a few music venues. The lineup at the Freebird is usually stout on Florida-Georgia week, and Lynch’s Irish Pub a block away will be a hot, sweaty mess. Head inland on Beach Boulevard, and Engine 15 Brewing Co. offers a wide selection of craft beers, including a few brewed in-house.

There is nothing like Angie’s Subs in Athens, or anywhere else. On the east side of the Intracoastal Waterway on Beach Boulevard, you can spot Angie’s by the packed parking lot outside of what looks to be an old Laundromat.

Like Pete’s, Angie’s is a dive, but it’s eclectic. Every table and chair is different, the sweet tea comes out of an 80-gallon drum, the signs are all homemade and the Peruvian and hot sauces are served out of old glue bottles. Squirt a lot of both on whatever sandwich you get—Angie’s is known for the Peruvian, but I prefer the Sweet Teddy T—and you will know you’re eating the best sandwich you’ve ever had.

This is not hyperbole. Every once in a while, I wake up in the middle of the night with Angie’s on my mind, and suddenly a 320-mile trip for lunch doesn’t seem so crazy.

If barbecue is your thing (it’s certainly my thing), Mojo’s BBQ and Blues Kitchen serves up a little something from every Southeastern state. The scene is close to Fox Brothers in Atlanta, with stained concrete floors, hot blues music playing and big portions. The Beach Boulevard location also offers a full bar and live music on the weekend.

The beach is nowhere near Beach Road Chicken Dinners. Despite the old man awning and the advertised low prices outside, Beach Road Chicken is not a fast food restaurant. Instead, diners at this 74-year-old institution sit around a table and eat family style servings of chicken, mashed potatoes, rolls and cream peas.

None of this is healthy, but this is Florida-Georgia weekend. If you were concerned for your health, you wouldn’t have come down here.

If you feel the need to eat seafood on the coast, check out Sliders Seafood or Two Dudes in Neptune Beach or Nipper’s on the Intracoastal. If you want to stay closer to downtown, The Blind Fig is a great new Southern-style gastropub in Riverside. And if you’re in Riverside and don’t mind spending 5&10 money, Restaurant Orsay offers a pretty special farm-to-table experience.

Now that I think of it, pick any restaurant in Riverside, and you probably won’t be disappointed. Think of the neighborhood as the offspring of Five Points and Normaltown. I’ll be spending at least one evening at the comfortable, often-outdoor bars in the neighborhood.

There is more to downtown Jacksonville than mortgage banks and crumbling buildings—although there is plenty of each. Jacksonville’s Museum of Contemporary Art is large and well curated. Anyone who enjoys a walk through ATHICA will dig this downtown gem.

If you’re more into nature art and taking Instagrams of flowers, take a stroll through the gardens at the Cummer. Located in the Riverside, the Cummer’s 100-year-old gardens stretch out on the bank of the wide St. John’s River.

You can also head a few blocks south for a free view of the river at Riverside Park. You’ll undoubtedly meet some neat characters along the way. Someone may even teach you how to fish the river.

A few more life lessons can be learned on the Jacksonville Skyway, the world’s most underwhelming monorail. The single car is cheap to ride and typically filled with no one in particular. After going hard in the crowds all day, the monorail is a place of solitude.

If you’re still not convinced, stop by my usual tailgate Saturday and meet some locals who will support all these claims. Just don’t expect to see me. Florida is awful.

VanHoose, an Athens resident since 2009, is a native of Jacksonville and a Florida fan, but he’s still a pretty good guy.