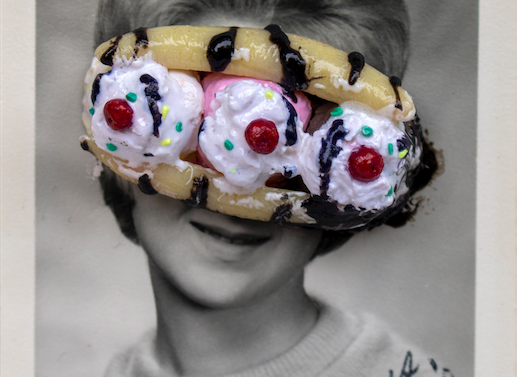 Spring graduation feels understandably lackluster to students unable to participate in the traditions of attending a celebratory commencement ceremony, ringing the Chapel Bell, parading underneath the UGA Arch and waving goodbye to friends destined to relocate. Sure, students can still hum the alma mater and throw their caps into the air while sheltering in place at home, but we all know that won’t feel nearly the same. Art students, in particular, may experience a potentially anticlimactic finale to life on campus, as annual exit shows move to online platforms in response to the coronavirus outbreak.

A decades-long partnership between UGA’s Lamar Dodd School of Art and the Georgia Museum of Art, the annual “Master of Fine Arts Degree Candidates Exhibition” is a pivotal point in every graduate student’s career as they complete a terminal degree and transition into the professional art world. For the artists, the exhibition represents the culmination of their academic studies after years of creative exploration and investment. To the general public, the exhibition offers a time capsule of contemporary ideas conveyed through media not limited to painting and drawing, jewelry and metalwork, fabric design, photography, video, printmaking, sculpture and ceramics.

Though not physically installed this year, the exhibition can currently be viewed on the museum’s website. In addition to artist statements, photographic slideshows are accompanied by thoughtful analysis from art history students. While there’s no comparable way to digitally replicate the buzzy excitement that surrounds a packed-out opening reception, the museum’s presentation makes a remarkable effort to thoroughly contextualize each body of work by expanding upon the artist’s processes and intentions—ultimately making for a more thought-provoking experience than a straightforward, in-person walkthrough might have. 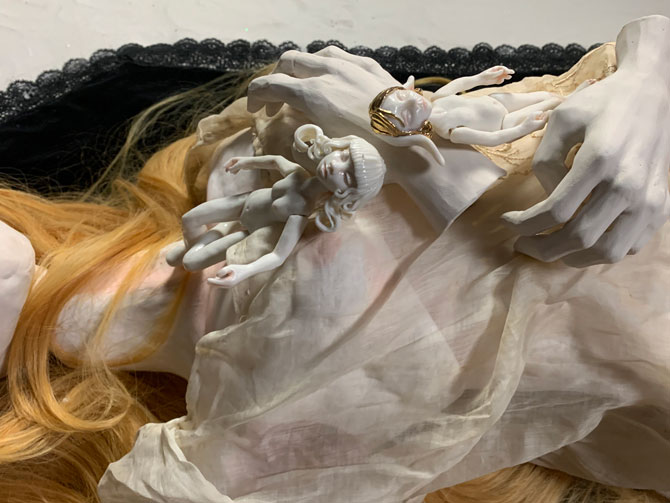 On the cover of this week’s Flagpole, Kim Truesdale’s banana split food face makes a playfully absurd first impression, yet her multimedia series called “Did You Get Enough?” subversively confronts notions pertaining to traditional gender roles, domesticity, and our complicated relationships with food. After a tragic incident of neglect left a loved one, who was a homemaker, in a diabetic coma for several days, Truesdale began investigating how Southern women’s fulfillment of traditional gender roles intersects with a loss of identity and independence. In her body of work, portraits from family albums and a series of Future Homemakers of America scrapbooks from the ‘50s and ’60s have their sensory organs concealed by miniature clay sculptures to represent how serving others can come at an expense to the individual.

Similarly taking a hard look at the South’s grim past, Rachel Watson’s installation, “247: Protected, Cared For, Cured and Released,” is a symbolic response to her research into Central State Hospital, the notorious and now defunct mental health institution in Milledgeville. Specifically, she examines the rejection of the Open Door Policy of 1973, a decision that would have given approved patients the freedom to roam the grounds and neighboring town in an effort to reintroduce them into society. The policy was largely blocked by then-state Sen. Culver Kidd, who was accused of inciting fear among local residents. Watson’s installation uses cyanotypes on 247 twin sheets to capture the shadow of the Freeman Building, where the patients lived, drawing attention to the facility’s hidden history.

Well-known locally as the mastermind behind Ad·verse Fest, AC Carter is a musician, performance artist and fashion designer who challenges the concept of an individual existing as singular by embodying multiple characters who represent different facets of their life. These characters include Klypi, a self-identified elf and aspiring pop star influenced by ‘80s pop and early 2000s industrial; Lambda Celsius (A°C), a designer of non-gendered garments and stylist of Klypi; and Vixcine Martine, a doctoral student at UGA writing their thesis on Klypi. A trio of music videos starring Klypi—“I’m Fine, “Get Over You” and “Not For You”—merge music, performance and fashion to touch on Carter’s ideas of authenticity, gender fluidity, and virtual versus physical identities.

Through her ceramic sculptures, Yana Bondar explores multiple perspectives on femininity—Catholic femininity, toxic or self-destructive femininity and the concept of “eternal girlhood”—by using narrative archetypes adapted from sources that range from biblical to contemporary to anime. Appearing as nesting dolls in coffin-shaped beds, her figures symbolize the multiplicity of roles for young women. Their ideal, exaggerated forms rest in varying stages of decay and obliteration, speaking to the potential toxicity of archetypes.