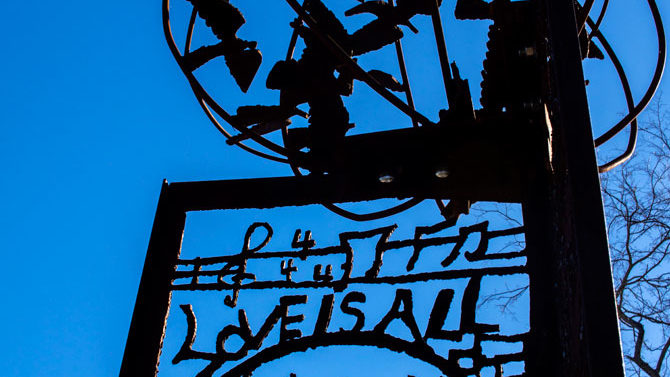 Since 2015, Harold Rittenberry’s towering 12-foot-tall sculpture “Spirit of Inspiration” has stood in the triangular island of land owned by Piedmont College at the intersections of Prince Avenue, Cobb and Harris streets. Made in the artist’s signature style of rust-colored metal panels cut to depict animals, scenes and phrases, the work was commissioned by the Historic Cobbham Foundation to reflect the neighborhood’s history and charm.

After several years of planning, the foundation and Piedmont have partnered again to officially develop the slice of land into the Cobbham Triangle Park, a public gathering space promoting local artists through interactive and site specific works. Josh Koons and Dustin Jones of the landscape architecture firm Koons Environmental Design designed the park, while a handful of residents, including Gwen O’Looney, Margie Spalding, Kathy Kirbo and Lewis Earnest, spearheaded the project. The park received $65,000 from the Riverview Foundation, which previously contributed to Boulevard Woods, as well as an additional $35,000 raised through an anonymous foundation and more from individual donors, for a total budget of around $150,000.

Every facet of the park demonstrates a remarkable level of attention to detail, incorporating local artisans and personalized touches wherever possible. One entrance leads visitors in through an entryway juxtaposing stainless steel and rusted steel made by Mike Harboldt of St. Udio, while a “Cobbham Triangle Park” sign designed by graphic designer Ken Williams similarly incorporates metalwork by Harboldt. Harboldt also restored the cast metal fencing that lines both ends of the park.

In addition to Rittenberry’s permanent sculpture, a lighted pedestal is designated for works of art that will rotate every six months or so. The first loaned sculpture on display is “Remembering” by Doug Makemson. Similar to the larger-than-life chrome dog that guards the entrance of Normal Books farther down Prince Avenue, this beautifully perched bird is welded from scrap metal and reflects the sky above.

Krysia Ara, the talented artist behind the Project Ginkgo mosaics adorning downtown light poles, as well as the enormous ladybug at the State Botanical Garden, created a new mosaic called “Flow” in honor of Eve Carson. Running along a low seat wall, the mosaic’s meandering waterway is dotted with the names of 47 Georgia rivers. Ara plans to complete the second installment of the mosaic on the other seat wall in the spring, which will bring “Flow” to a total of 80 feet of glittering glass and hand-painted ceramic pieces.

Intended to serve as a space where people can spend time together, the park features multiple stone sculptures that double as tables for chess, checkers and ping pong. These giant granite slabs were designed by Stan Mullins, whose monumental works can often be seen scattering the lawn of his studio across from the Leathers Building on Pulaski Street.

The park’s grand opening also marked the launch of The Ecohood Project, a new initiative with a mission statement to support personal, neighborhood and community improvements to the environment through purposeful education and action. Beyond increasing local green space, organizers sought to connect the arts to the larger community through sustainable practices. Cobbham Triangle seeks to become a model for how public spaces can remain ecologically mindful, from the early stages of design and construction into their actual usage and future upkeep.

The Ladies Garden Club, which emerged as America’s first-ever garden club after being founded in Cobbham in 1891, will oversee a “Connect to Protect” garden that incorporates native plants to better support local pollinators and maintain biodiversity. Part of the nationwide nonprofit Little Free Library, a newspaper distribution box repurposed into a tall robot sculpture encourages visitors to drop off or pick up a used book from its belly. The sculpture also features solar panels that power a cellphone charging station.

As with any traditional park, you’ll also find all of the essential staples, but with thoughtful touches. A loaned bench designed by Adam Kurtz is hard to miss with its bright red paint and unusual curved shape. A series of semicircle bike racks arch from the ground and subtly complement the park’s circular plots of grassy land. And a water fountain for humans is even accompanied by a low-to-the-ground fountain for four-legged companions.

Cobbham Triangle Park is open dawn to dusk, with the potential for special occasions to be held at night in the future. Event organizers or artists interested in showing work should contact the park’s committee through historiccobbhamfoundation.org.