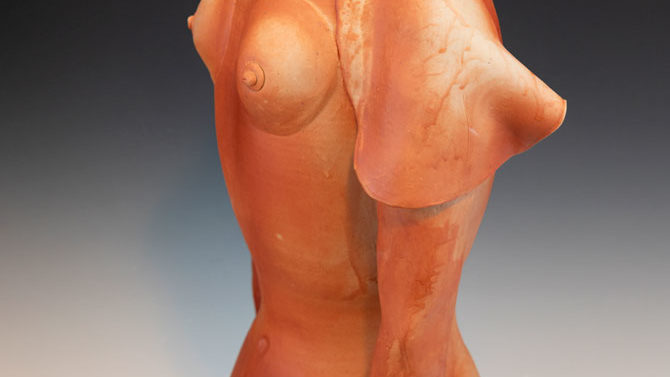 All through the ’70s and ’80s, Watkinsville artist Alice Woodruff worked as a production potter, shipping out wares to shops across the country. After a career switch into becoming a nurse practitioner, she thought her years of making pots were over. Alas, a traumatic life event in combination with the 2008 recession eventually brought her back to the studio full-time.

Currently on view at the Oconee Cultural Arts Foundation, two distinct bodies of sculptural work, “Transitions: Vessels for Sam” and “Warrior Women: From Invisible to Formidable with a Nod to #MeToo,” share the artist’s journey towards reconciling difficult experiences. Where her pottery had previously consisted of elegant, functional stoneware pieces, she now focuses on decorative and figurative works that allow for greater expression.

Nearly a decade after the suicide of her teenage son, Samuel Thomas Crowe, Woodruff returned to clay with the hopes of working through unresolved feelings of grief. Both cathartic and exhausting, the act of producing artwork turned out to be more effective in some ways than years of counseling, support groups and religious exploration. The resulting body of sculptural work, “Transitions: Vessels for Sam,” is deeply personal and emotionally heavy, yet provides an important space for contemplating physical death and spiritual rebirth.

“It was almost historically formulaic, in that every ancient culture has had a similar ritual in providing for the dead,” says Woodruff. “I didn’t recognize the pattern until much later, after viewing the King Tut exhibit and the terra-cotta warrior exhibits in Atlanta. I had a good laugh at myself for the ‘original’ idea of sending Sam’s worldly belongings to the afterlife via boats.”

At first, the hand-built vessels took the form of hollow watercraft that could be filled literally or symbolically with mementos and memories from her son’s life. As time went on, the vessels became more barge-like, serving as stages for philosophical and conceptual ideas to play out. This laid the foundation of her latest figurative work, which is a departure from her prior emphasis on more traditional and utilitarian pottery.

“The grief is cyclical in nature, though the cycles spaced further apart with each passing year. Grief does change with time,” says Woodruff. “The role of these pieces now is to keep the topic of suicide in society’s face. The suicide rate has not gone down—it continues to climb annually, particularly among young people.”

“Transitions: Vessels for Sam” first debuted in February 2017 in the Meyer’s Gallery at Athens Academy, where Woodruff was joined by her daughter, Ann Lily Woodruff-Conley, and Nuçi’s Space Director Bob Sleppy to give a presentation on suicide prevention to the upper-school student body. Through sharing her journey towards healing, she hopes to open a dialogue within the community that destigmatizes the experience of living with mental illness, promotes the visibility of mental health resources and provides empathetic support for surviving family and friends, who often suffer from feelings of loss and isolation.

While preparing for her exhibition at OCAF, Woodruff was aware that she needed to create new additional work, but she found herself distracted and drained from depression triggered by news headlines for several months. In an attempt to break the creative block, she decided to go back to familiar territory and sat down at the wheel to throw some large porcelain vases. Suddenly, she found her muse upon realizing the forms were shaped like women’s torsos.

This second body of work, “Warrior Women: From Invisible to Formidable with a Nod to #MeToo,” represents the universal stories of women across cultures who have experienced social and political injustices. Once again, Woodruff managed to translate complex experiences into powerful sculptures, all while processing her own intense emotions of anger and helplessness. Instead of responding to current events by feeling defeated or disillusioned, she used them as fuel to fire up the kiln.

The Warrior Women fall into three main categories, reflecting a progression from vulnerability to full confidence over time. Influenced by the Harvey Weinstein story as well as Trump’s infamously offensive “Access Hollywood” comments, the first group of figures emerged from a vulnerable place to represent the mass victimization of women. Their bodies are fairly diminished and unsophisticated, and they hold their arms in protective stances, as if fearful.

Wishing to work in more detail, Woodruff switched from porcelain to white stoneware clay for the second set of figures. Exploring the theme of “Women as Vessels,” she envisioned pieces that could convey women’s intrinsic importance and crucial roles played within society. Representing quintessential pregnancy, “Mary” folds back the skin of her womb to reveal a child and small church, suggesting the importance of reproductive justice. Speaking up on behalf of the American agricultural system, “Dorothy” holds a farm to draw attention to women’s back-breaking contributions as homesteaders, ranchers, gardeners and conservationists.

In the third and final chapter, “Women as Warriors,” the figures have become emboldened and stand proudly in knowing their inherent self-worth. Some are even weaponized, like “The Amazonian,” who balances a double-bitted axe on her shoulder, and “Joan,” who cradles a medieval flail, as if ready to oppose anyone who tries to tear them down. Their arrival to this state represents the resiliency and courage of women worldwide and a cultural shift in the tide.

In addition to “Transitions” and “Warrior Women,” the gallery is currently exhibiting “David & Goliath: OCAF’s Annual Small Works and their Colossal Counterparts.” The group show features works of nontraditional sizes, either smaller than 14-by-14 inches or larger than 48-by-48 inches. All three exhibitions will remain on view through Saturday, Nov. 10.