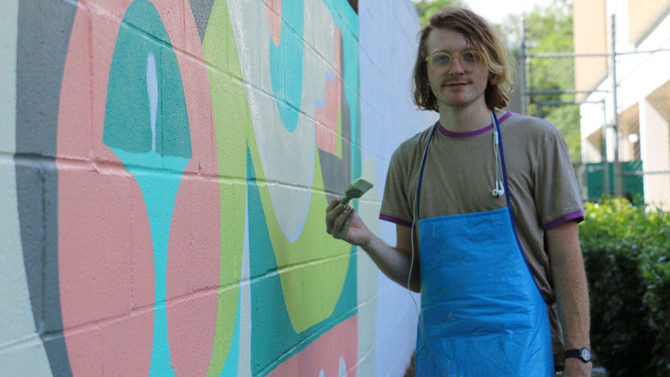 MURAL MAGIC: Alongside this summer’s public art projects led by David Hale and Broderick Flanigan, local artist Logan Shirah has painted a fun new mural for all to enjoy. Located in a place that every Athenian must visit at some point or another, the mural is situated alongside the back wall of the Georgia Power parking lot facing Prince Place. Flowing shapes in turquoise, teal, peachy pink and pistachio green pop from behind manicured shrubbery, adding a huge banner of color to the neighborhood.

The mural was commissioned through a public call for artist proposals by Kevin Bates, who owns the neighboring historic home at 1045 Prince Ave., and his niece Madeline Bates, who is also Flagpole’s former arts intern. Georgia Power supported the project as an extension of its dedication to “enriching arts and culture,” a focus of the company’s larger, five-tier initiative of giving back to the community.

The Bates assembled a small panel of judges, consisting of Kristen Ashley of the KA Artist Shop, Cheri Leavy of Guide 2 Athens and Christy Terrell of Georgia Power, who blindly reviewed more than a dozen eligible submissions. Shirah was awarded $500 for his design, along with a $200 stipend to cover necessary supplies.

“I couldn’t be happier with the finished product. The color palate is fun, refreshing and eye-catching; the shapes really keep your eye wandering,” says Madeline Bates. “I feel proud to have given a helping hand in bringing something like this to the community.”

Originally from Atlanta, Shirah recently graduated from UGA’s Lamar Dodd School of Art with a BFA in painting. In addition to his contributions within the local visual art and music scenes, he is also a co-founder of the Athens Free School, a community-based learning network that offers free skill-sharing workshops on topics as diverse as juicing, overtone throat singing, building tiny houses and making natural insect repellents. Shirah has painted an indoor mural in Atlanta and multiple graffiti-type artworks scattered across the city in the past, but this latest mural is his largest painting to date.

“My process or flow usually starts with a sort of hazy mental image or loose plan for the underlying feeling of a piece, then sort of a constant push and pull with improvisation and scrutiny until it’s close to where I want it,” he says. “This mural was a bit of a change, because I had to create the composition beforehand to submit to the competition, and had to try to deviate from the original plan as little as possible.”

Shirah’s paintings often employ an automatic mark-making approach, guided by his current mood or in response to whatever is occupying his mind. This meditative process results in forms that are interconnected by flowing lines, ultimately transforming a stream of consciousness into one cohesive whole. He draws influence from icons like Picasso and Wassily Kandinsky, as well as from modern illustrators such as Kyle Patrick and Michael DeForge.

“I might describe my style or look as one part throwback to abstract surrealism, one part gentle psychedelia, one part childhood cartoon-world nostalgia and one part esoterica with reference to codes, systems and devices,” explains Shirah.

Roughly 50 feet across and 6 feet tall at its highest point, the tiered mural took about a month to complete, with the artist working two to four days a week in three- to seven-hour stretches. Sure to brighten up the day of anyone who passes by, it’s well worth delivering payments in person just to see the artwork up close.

“The mural is a place marker, a memory maker. It transformed a bland parking lot that may otherwise feel stressful or unmemorable into a very positive, fun experience—even if the experience is just to walk in to pay a bill last minute on a Friday!” says Madeline Bates. “I hope it will make many Georgia Power customers and Prince Place drivers happy for many years to come.”

HYDRANT HYPE: The latest public art endeavor facilitated by the Athens-Clarke County Unified Government is Fire Up the Hydrants, which seeks to transform 16 ordinary hydrants into functional works of art. While beautifying downtown, the decorated hydrants will commemorate 80 years of drinking-water delivery service from the JG Beacham Drinking Water Treatment Plant. The project is spearheaded by the Water Conservation Office, the same masterminds who creatively draw attention to the importance of water through annual events such as the Ripple Effect Film Project and Roll Out the Barrels.

All area artists, teams and organizations are encouraged to submit designs, which will be reviewed by members of the Athens Area Arts Council, ACC Fire Department and Downtown Athens Development Authority. The finished hydrants will be unveiled in October, coinciding with the AthHalf marathon. Prizes will be awarded to the artists with the most popular hydrants, which will be determined through a ballot voting system.