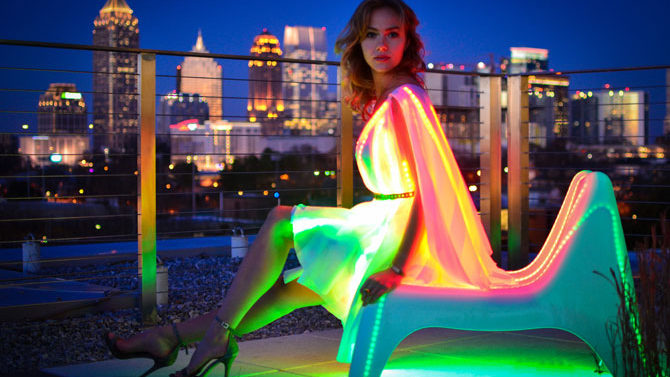 Over at Lyndon House, New Zealand-based multi-media artist Shannon Novak presents “String Section,” an interactive installation that merges smart-mobile technology and visual graphics to transform the gallery’s walls into a musical instrument. During its duration from Thursday, Mar. 26–Saturday, Apr. 11, visitors can play the walls like a piano.

Several of Slingshot’s installations present fascinating ways to make data visible. “The Unemployed” by Jody Zellen, on view at Ciné, visualizes worldwide unemployment among multiple countries by pulling data from online sources and representing the jobless as animated figures. Outside Live Wire, you can find “Bat-Bots” by Daniel Miller, a sound sculpture that uses distance sensors to detect the presence of visitors and emit echolocations.

Just as many of the installations are interactive. Also at Live Wire, “Pixi Dress” by Zane Cochran is an interactive, hyper-customizable dress embedded with 600 spatially-aware LED lights that create mesmerizing designs controlled by the environment. Cochran, co-founder of HackBerry Lab at Berry College, is a PhD student at Georgia Tech who was featured at Lyndon House this past year for his immersive environment BitDome. Another fun interactive piece, “Social Synth,” will make an appearance at Little Kings. Artist team Relay—with members including Athenians Greg O’Connell, Ash Rickli, William Kennedy and Addison Adams—converted a dumpster into a giant, walk-in analog synthesizer and drum machine decked out in LEDs.

For a full list of participating artists and a schedule, visit the Slingshot site.

FILM: Though Slingshot has screened collections of short experimental films in the past, this year marks the full launch of a film addition to the festival. The Georgia premiere of Salad Days, screening on Sunday, Mar. 29 at 7:30 p.m. at Ciné, documents the early DIY punk scene of D.C. through interviews with the likes of Ian MacKaye, Henry Rollins and Thurston Moore. Clarkesdale, screening on Friday, Mar. 27 at 4:50 p.m. at The Globe and Saturday, Mar. 28 at 5 p.m. at Flicker Theatre & Bar, is a full feature film directed by Will Goss about a university student who gets entangled in a revolutionary terrorist plan to assassinate by time-bomb a government official who happens to be his father. Big Bad Art, screening at The World Famous on Sunday, Mar. 29 at 5:05 p.m., is a documentary following emerging artist Andrew Ohanesian in the weeks leading up to a life-changing opportunity: his experiential installation “The House Party,” a free-standing house built within a Williamsburg art gallery.

{ group theory }, a collaborative production studio and media company that creates documentary films, narrative shorts, branded content and original series; will present several films on Saturday, Mar. 28 at The Globe. William and the Windmill, screening at 3 p.m., is a full-length feature following William Kamkwamba, a Malawian who creates a windmill from junk parts in order to generate power and protect his family from famine. Brooklyn Farmer, screening at 4:40 p.m., is a short about Brooklyn Grange, a group of New York City farmers attempting to operate the world’s largest rooftop farm. Palimpsest, a short screening at 5:05 p.m., focuses on a New York house tuner who offers spatial therapy by analyzing the harmony of notes created by appliances and traffic.

Many of the films run under a half hour, making it easy to pop in for a quick breather. International art film selections on Thursday, Mar. 26 at 6 p.m. will present Italian shorts Epythimetikon by Diego Capoccitti, Kintsugi by Apotropia and Molar Formations: Urban Cuts by Matteo Pasin; Swedish short (+) by Tina Willgren and Taiwanese short The Voyage (In the End: The Beginning) by Poyen Wang. Other shorts include dark comedy Fools Day, local group Dominar Film’s God’s Precious People, documentary The Shrimp, a selection of works by Yours Truly and an episode of TV series “Music Voyager” featuring Kishi Bashi, The Whigs, Pylon, Bloodroot Blades and Peter Dale.

With the exception of Salad Days, which will cost you $5, all films will be screened free of charge, with or without a wristband. For a full schedule of film screenings, visit the Slingshot site.