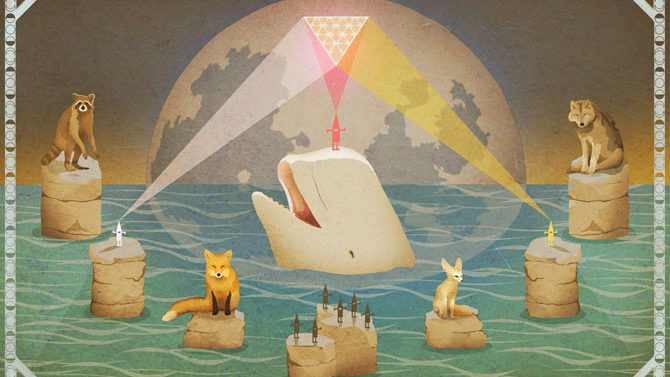 “This all kind of started with pretty intense sciatic pain,” says Grice. “Spent a good time earlier this year laying on a yoga mat with my legs pushed this way, a belt wrapped behind a foot, and headphones on my ears. It was a lot of brain time…My boyfriend Matt [Blanks, who curates the restaurant’s exhibits] had just finished a show—he was going to work and coming home to paint—and immediately jumped back into producing a shit-ton of digital work. I was clocking in at 7:30 a.m. and clocking out at 5 p.m. to come home to TV and exhaustion. Basically just waiting for tomorrows. Told him to just book me a show at The Grit, and I’d figure something out.”

Though “Little Lords” may be his first solo show, Grice has a remarkably distinct style, thematically blending elements of wonder, spirituality and ritual into richly hued fantasy environments. After attending school to study painting and drawing, he worked predominantly in charcoals and experimented with Photoshop for album art and flyers. Realizing that there was still much to be learned with Adobe, he committed to this exhibit as a way to motivate himself to learn the software.

“I’ve always loved early Christian and Byzantine art,” says Grice. “I knew I wanted to start there. Wanted my work to look like an illustrated book of some lost religion from the Roman Empire, and at the same time the 1960s.”

“I think they have kind of lost their way. So, I figured I’d illustrate my own world. I still borrowed ideas from Christian history—war, crowns, genocide, division—but also borrowed a lot from Native American, Wiccan and other cultures—protection, growth, community, new beginnings.”

In addition to symbols and ideas borrowed from religion, these mythological scenes are full of pop culture references.

“Everything usually started with an event I wanted to illustrate based on some song, long day or ‘Game of Thrones’ episode,” says Grice. “And yeah, ‘Little Lords’ is what the wildling lady calls the Stark little ones. Pop culture is involved in all these.”

Cohabiting with the collection’s animals are little rocket-shaped, monochromatic creatures that often project rays of light, adding a digital overtone. “I grew up, and I think a loot of us did, with Zelda and Mario. I’d be lying if those images and sparse 8-bit, 2D screen shots didn’t affect the way I see things,” says Grice. “So yeah, this is gamer-inspired. With video games, like animation, someone designed every element, composition, color choice and even potential choices. It’s complete control of an experience in someone’s art.”

“Little Lords” will be on view at The Grit through Sunday, Jan. 4.

Athens Arcana: Lawson Grice is also one of 78 regional artists participating in ATHICA’s “Athens Arcana: A Contemporary Tarot,” a collaborative project in which each artist created one card to compile into a full tarot deck. The original artwork of each card is currently on view in the gallery, which will be open this Thursday from 1–9 p.m. and Friday–Sunday from 1–6 p.m. A closing reception on Sunday from 4–6 p.m. will offer a last-minute opportunity to pick up tarot decks and original pieces before the holidays. If you miss the reception, decks can still be ordered at athica.org for $30.

Holiday Markets: The bulk of this year’s holiday artist markets have passed, but there are still a few opportunities to find locally made crafts. The Athens Farmers Market, held on Saturday, Dec. 20 from 9 a.m.–12 p.m. at Bishop Park, will offer a selection of items like scarves, cutting boards, soaps, salves and stuffed animals. Christmas at the Classic Center’s Handmade Holiday Market, open Saturday, Dec. 20 and Sunday, Dec. 21 from 10 a.m.–5 p.m., will host a handful of exhibitors. In Watkinsville, the Oconee Cultural Arts Foundation’s Artist Shoppe features items created by 60 of the gallery’s members and will be open 10 a.m.–4 p.m. through Saturday, Dec. 20. The Lyndon House Arts Center’s market, Deck the Walls, is perhaps your best, last chance with works by 70 regional artists, authors, crafters and musicians including paintings, prints, glass ornaments, pottery, sculptures and more. Deck the Walls is currently open Tuesdays-Saturdays from 12–5 p.m. until Sunday. Jan. 4.