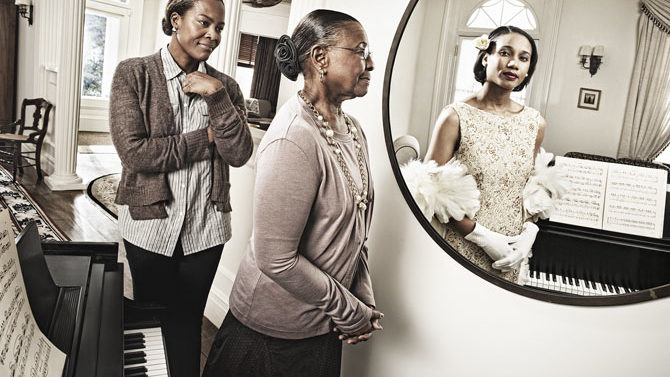 “The Third Act: Contemplating Aging” at the Athens Institute for Contemporary Art—opening with a reception on Saturday, Jan. 18, 7–9 p.m.—explores aspects of contemporary aging with a focus on the final three decades that have recently been added to the average human life expectancy.

“Confrontation with mortality causes discomfort among the a-philosophical or a-religious. Ironically, this has been abetted by medical science’s admirable accomplishments; in 1900 we lived an average of 47 years!” says exhibit curator and ATHICA Director Emeritus Lizzie Zucker Saltz. “We tend to forget that just a half-century ago, during the pre-antibiotic era, most grew up with an intimate familiarity with death, as most children witnessed one or more loved ones succumbing to an infection as common as strep throat.”

Though scientific advances have extended life expectancy, ethics are still playing catch-up with how to approach and value old age. “The lay public tends to conflate aging itself with death and the bodily deprivations preceding that, rather than on an awareness of the varying aspects of the third act stage, its rewards as well as its challenges,” says Zucker Saltz.

After mysteriously receiving an EKG strip tracing the final hour of her ailing stepmother’s life, artist Malena Bergmann was inspired to create “Final Hour: Compline,” a 14-foot long kinetic sculpture. The massive piece—which served as the initial inspiration for Zucker Saltz to curate “The Third Act”—centers on the strip as it scrolls from heartbeat to flatline, surrounded by wheelchair parts and medical tubing, alluding to the extreme lengths the scientific and medical professions go through to prolong life.

Similarly inspired by the experience of caregiving, sculptor Ann Rowles presents painstakingly crocheted body parts focusing on the areas of her mother’s body afflicted with ailments.

Cecilia Kane contributes a selection of self-portraits from her “How Am I Feeling Today?” series as well as photo documentation from “The Mother Hole,” a performance project in which she meditated on the nature of death and her own mortality every day for five weeks while digging a deep hole in a former marble quarry.

In Peter Nelson’s moving eight-minute video, On Dying, a series of young adult actors lip-sync the stories of elderly people on the subject of aging and death, highlighting generational incongruities and the disparate perspectives held between young and old people.

The expressionist paintings of Lisa Freeman compress the span of a lifetime into a single image. While many of her subjects have petite, childlike frames, the emotional wear on their faces—sunken cheeks, circles under the eyes and general frailty—suggest decades of experience beyond their years, ultimately making their ages indefinable.

Karen Hymer’s photo gravures render up-close images of the aging female body as abstract landscapes. Turned off by mass media’s unfair standards of beauty and normalization of age-reversing products and procedures, Hymer celebrates the signs of aging as a natural part of mortality worthy of respect.

Taking a more cheeky approach, John English presents an installation of faux anti-aging products, poking fun at culture’s obsession with preserving youth and its deep denial towards the inevitability of growing old.

David Noah presents striking black and white portraits of lively local elders who have either shared true accounts from their lives at “Silver Box: Living History,” an event held this past Spring by adult storytelling series Rabbit Box, or have shared original poems during the monthly open reading series, Word of Mouth. His body of work aids in the appreciation of how the community benefits from the insights, wisdom and years of experience held by the older generation.

The staged scenes in photographer Tom Hussey’s “Reflections Series” show elderly individuals gazing into a mirror that reveals back a memory of them at a younger age. Originating as a commission for a pharmaceutical campaign combating Alzheimer’s disease, the series focuses on the importance of reflecting back and coming to terms with one’s personal journey.

Several events are scheduled to foster discussion on the topics of aging. On Friday, Jan. 31, at 8 p.m., Noah and English will host a “Third Act Writers Read” featuring poets of the local literary community. On Sunday, Feb. 23, from 2:30–5 p.m., a “Symposium on Contemplating Aging,” organized by social work graduate student Melissa Armstrong, will feature Dr. Anne P. Glass of the UGA Institute of Gerontology. The exhibit will conclude with an artists’ panel discussion and reception on Sunday, Mar. 2, from 4:30–6 p.m.