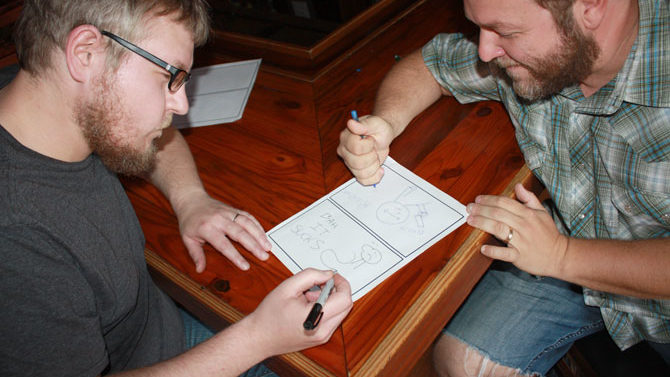 On the Cover: “The Flickskinny Museum”—currently on display at Flicker Theatre & Bar through the end of September—provides a retrospective look at the 15-year legacy of “The Flickskinny,” a film review comic offering critical, witty insight on the latest Hollywood blockbusters.

“The Flickskinny” was born in 1998 as the brainchild of co-illustrators Jeremy Long and Clint McElroy, who would draw entire comics while working Friday night shifts together at Vision Video. The comic was picked up two years later by Flagpole and has been a weekly staple of the magazine ever since.

Although Long and McElroy currently co-own Flicker Theatre & Bar—after buying the establishment from founder Angie Grass in 2007—the exhibit marks the largest step in overlapping the two flick-centric ventures. Long says, “When Flicker opened, it sold ‘The Flickskinny’ for a short while. We also had ‘Flickskinny Presents’ movie nights for a while, too, and we’ve talked about bringing them back. Other than that, there hasn’t been much crossover between the two.”

Viewing the comics chronologically, it’s evident that very little has changed stylistically over the years. “We used to have four panels, but people complained it was hard to read, so after eight years of complaints we went to two panels,” says Long.

The comic’s merit lies not in its artistic aptitude, but in its ability to communicate the most significant takeaway from each film in a conversational, typically snarky tone. Long and McElroy essentially sketch out the largest impressions from every movie they watch, as if to answer the question “Is it worth seeing?” in a minute or less before moving on.

“We avoid comedies, unless they look truly awful, and try to pick things that we know will be fun to draw, like sci-fi and horror,” says Long. “Then we check Rotten Tomatoes, and whatever has the worst score we do.”

The exhibition itself was created to parody those within museums, with each display highlighting an important aspect of the history and evolution of the comic. Highlights include a display of rough drafts and final versions, trivia questions, a montage of cameos that have appeared over the years—like DJ Mahogany and Satan—and even a “gift shop” with information on how to order past volumes.

“I just thought it would be funny to call it a ‘museum’—be sort of pretentious about it, since it’s such a trifle. After I decided to call it a museum, it just kind of steamrolled,” says Long. “I started having all kinds of ideas based on museums like timelines, process and interactive exhibits… As for the actual comic choice, we each just chose 15 and whittled them down to 17. The collection of Hitlers, though—I don’t know where that came from.”

To dig further into the archives of “The Flickskinny,” visit www.flickskinny.com.

“It’s Like a Rainbow” features large-scale paintings that explore color by Sarah Emerson, Christopher Hocking, Lisolett Johnsson, Hannah Jones, Tommy Taylor, Kathryn Refi and Elliot Walters. The “Color Recordings” series by Refi appear as giant palettes of vertical stripes in a gradient of muted tones. In her artist statement, she explains that she wore a hat with a small video camera fastened on to record everything she saw during her waking hours for an entire week. “The resulting footage was streamed through a custom computer program to determine what colors I saw and proportionately how much of each one… The paintings are a visual representation of the colors in my environment, and their relative amounts.”

The exhibits will be on display in the Classic Center’s Classic Art Galleries I, II and III through February.

Jump Start Your Art: Slingshot 2014, a newly formed festival focused on electronic arts, music and technology, is currently accepting performance and art proposals for its next downtown takeover, slated for Mar. 20–22. This past spring’s inaugural showcase featured over 45 artists representing 20 different countries and reflected a wide range of experimental arts, sound works, video and audiovisual works, short films, social media, locative media and site-specific installations in the urban environment. The application deadline is Friday, Nov. 1. Visit www.slingshotathens.com for additional details and to fill out a submission form.